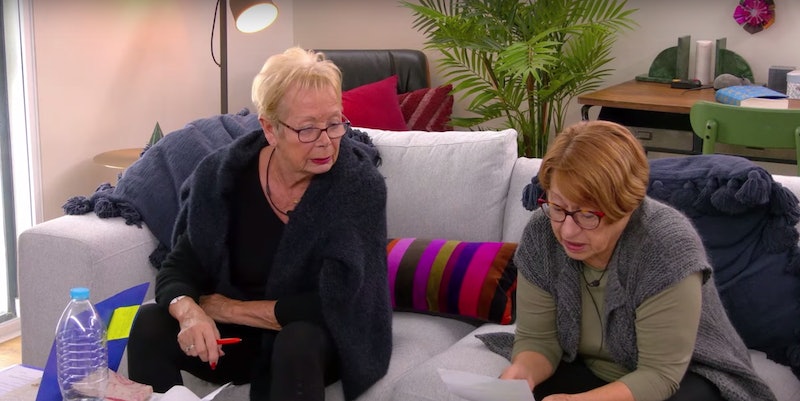 People usually don't admit out loud that they want to be perceived as cool online, but Netflix's reality TV show/game show The Circle unabashedly embraces the desire for digital popularity. What began as a 2018 British show has since turned into a series of successful Netflix spin-offs, first starring an American and then a Brazilian cast. Now that a French version is making its debut on April 9, The Circle France cast Instagrams are a great way to get an early glimpse at who we can expect to see vying for €100,000 and the title of top influencer.

First up is The Circle France's Rudy Doukhan, who looks like he's going to be the comedic relief of the group, as he's a stand-up comedian. One of his latest posts features him joking that he used to have six-pack abs before the quarantine, and now he has ones drawn on by his kid's markers.

The Circle France's Ines describes herself as a beauty and football enthusiast who's into "wellness-ish" and "life stuff" on Instagram, so our best guess is that Ines is a beauty blogger or influencer. Her more recent posts feature face masks and colorful quarantine manicures.

Cedric Doumbe is probably the most well-known contestant on The Circle France, as he's a Cameroonian-French kickboxing champion who's won over 73 matches. You can check out the various fight clips on his Instagram.

The Circle France's Catala appears to be a French model based on her Instagram posts. She's also likely of Moroccan descent, and recently she posted a video of belly-dancing in pajamas to pass the time during quarantine.

Gary Jarny is an artist, singer, dancer, and performer, based on his Instagram posts. He seems to love performing musicals at a small local studio, and is into tarot cards (or at least, into hoping they'll tell him if he wins €100,000).

Romain's older Instagram posts suggest he's a pastry chef, though he hasn't posted any new food pics for a while. He has a Frenchie dog and great street style, though.

Based on Maxime's Instagram, he seems determined to be the ultimate wife guy, as almost every photo is of him and his wife Valeria (who he calls "my princess"). Interestingly, Valeria's Instagram mentions she's "in the game" with Maxime, meaning maybe Maxime catfishes as Valeria? Or Valeria is also on the show without Maxime realizing it?

Lou is definitely a professional model, and she appears to be repped by the Hourra, DMG Paris, and SC modeling agencies. She also has an adorable malinois puppy.

João only has five Instagram posts, so at this point he's a total mystery. The only thing we really know about him is that he definitely has a twin brother, and based on the trailers it appears both of them will be in the apartment. If they play as a duo or pretend to be one person, however, remains to be seen.

In a video with Oh! My Mag, Chico Paolo describes himself as an actor, student, and model. When he's not modeling, he seems to advocate a lot for climate change legislation.

According to the trailers, Josette will be the only The Circle France contestant who's not a millennial or younger. It appears she'll be in the apartment with a friend or relative, and they're both a bit clueless (understandably) about the technology. Josette's Instagram shows she loves lounging on the beach and drinking wine, so she's pretty much already my favorite contestant.

More like this
Here’s Everything Coming To & Leaving Netflix In July
By Grace Wehniainen
What’s New On Netflix: The Return Of 'The Umbrella Academy'
By Arya Roshanian
Bachelor Nation's Blake Horstmann Is Dating 'Love Is Blind' Star Giannina Gibelli
By Jake Viswanath and Radhika Menon
Move Over, 'Sunset'! The Drama-Filled Trailer For 'Selling The OC' Is Here
By Nola Ojomu
Get Even More From Bustle — Sign Up For The Newsletter