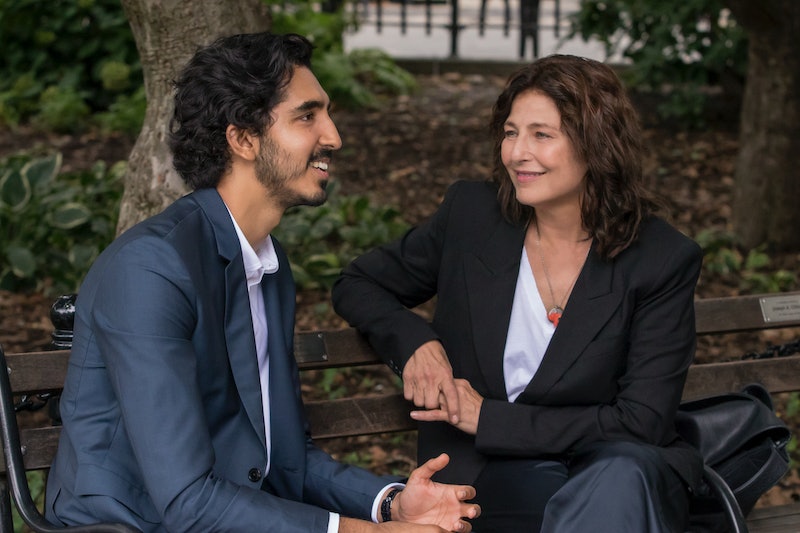 Amazon Studios' Modern Love has been evoking a range of emotions since the anthology series premiered on Oct. 18. For those attempting to quell their tears, the music — in particular, the "Circus" song in Modern Love's second episode, "When Cupid Is a Prying Journalist" — will be of little help. The track, which is performed by British singer Nerina Pallot, can be heard toward the end of the episode after Michael (Andy Garcia) and Julie (Catherine Keener) share a poignant kiss goodbye and return to their respective spouses.

At one of this installment's most pivotal moments, Pallot beautifully croons the ballad's evocative lyrics like, "Red and yellow dancing in your eyes / I let my heart fly above the high wire / But we kept spinning down / Do you remember when the circus came to town?" as well as "I don't want to, but I still love you / and I can't turn around/ I still remember when the circus came to town."

"Circus" was among several tracks created specifically for the series (based on the New York Times column of the same name) by musicians Gary Clark and John Carney, who also wrote and performed the Modern Love theme song, "Setting Sail." (Those behind the official Modern Love Twitter account shared that the original tracks pays homage to the fact that "every love is unique" and that it also honors "each special story told in the series.") Affected viewers quickly took to Twitter, message boards, and various comment sections to figure out everything from the artist's name and song title to where and how they could buy or stream "Circus."

Viewers initially had no indication if the original songs would also be released to the public at some point. After a fan tweeted Clark on Oct. 19 to say they were "literally searching everywhere to figure this out and find the song," he replied with the good news: "Soundtrack album released next week!" In a reply to another fan, Clark added that "Circus" is "most definitely on" the upcoming Modern Love soundtrack, which he said will be available in both physical copies and digital versions.

In an Oct. 18 tweet, Clark explained that Modern Love includes "at least one unreleased exclusive track per episode" and features artists, including: Regina Spektor, Goldfrapp, The Divine Comedy, Lera Lynn, and Thomas Dybdahl.

Fans may have to wait a few more days to download "Circus," along with more of Modern Love's equally touching tracks, but there's still plenty of time to stream the series on Amazon and hear the music as the love stories are being told.

More like this
Linda Ronstadt’s “Long Long Time” Plays A Pivotal Role In The Last Of Us
By Brad Witter
The Bachelor’s Christina Mandrell Comes From One Of Country Music’s Most Famous Families
By Brad Witter
Hallmark’s The Way Home Is Like 'This Is Us' Meets 'Back To The Future'
By Grace Wehniainen
Here’s What Happens To Bill & Frank In 'The Last Of Us' Video Game
By Brad Witter
Get Even More From Bustle — Sign Up For The Newsletter
From hair trends to relationship advice, our daily newsletter has everything you need to sound like a person who’s on TikTok, even if you aren’t.