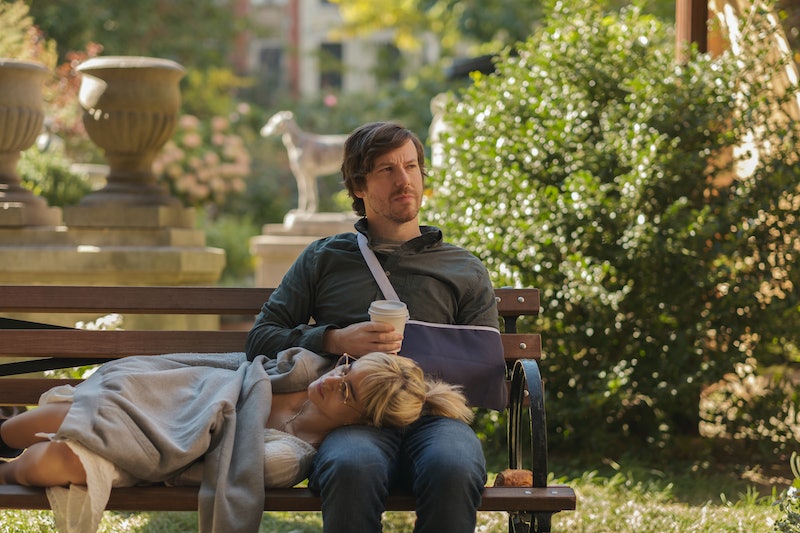 Spoilers ahead for Modern Love Season 1. In the Season 1 finale of Amazon's Modern Love — "The Race Grows Sweeter Near Its Final Lap" — a grieving widow named Margot goes for a run after delivering her husband’s eulogy. She met her husband while on a run, which lends the scene of her jogging through Manhattan in a black pantsuit a sense of poignance. It also confirms what fans of the series, based on the New York Times column of the same name, have always known: that the love stories it depicts are no more atomistic than our own. They are the invisible stories that Margot runs past without knowing it on one of the saddest rainy days of her life. "The rainstorm, that piece of electricity in the sky, connects them all in a very special way," showrunner John Carney explained in a press release. These brief intersections also provide additional context for the relationships explored throughout the season.

Episode 1 - "When the Doorman is Your Main Man"

In the series opener, Maggie (Cristin Milioti) leans on Guzmin (Laurentiu Possa), the doorman in her building, when she finds out she's unexpectedly pregnant. In the series finale, we catch an extra glimpse of what that support looked like when Guzmin follows Maggie to an early doctor's appointment on the same overcast day of Margot's husband's funeral. "I promise you I am here for no reason," he assures her in a heartfelt declaration. "You do whatever you need to do. Nothing will change me or any people who really love you. I'm just here with the umbrella."

Episode 2 - "When Cupid is a Prying Journalist"

In their early-season episode, journalist Julie (Catherine Keener) urges young app developer Joshua (Dev Patel) not to give up on a lost love, a mistake she made when she was his age. In the finale, Julie and Joshua run into each other again, and we learn that after rekindling the relationship, Joshua is still with Emma. Meanwhile, after leaving her husband, Julie is dating again. When they run into each other, she's on a date she met using Joshua's app.

We only catch a glimpse of Anne Hathaway’s Lexi, a woman with bi-polar disorder, riding her bike down the street. It's impossible to place the moment chronology, but the scene reads optimistic: she's smiling in a pink coat.

In this episode based on a column written by the wife of actor Denis Leary, a couple (played by Tina Fey and John Slattery) learning to play tennis finds that their progress on the court mirrors the health of their marriage. In the finale, we see them squeezing in another rally even as the rain starts to drizzle down — a snapshot of commitment.

Episode 5 - "At the Hospital, an Interlude of Clarity"

On the same day as Kenji's funeral, we see the meet-cute that led Yasmine (Sofia Boutella) and Rob (John Gallagher Jr.) to the emergency room adventure from the fifth episode. Rob has just been stood up. He's actually fleeing the restaurant when the rain forces him under the same awning that Yasmine, as gregarious as she is beautiful, decides to duck under. When she strikes up a conversation, he tells her his tale of stood-up woe. To his surprise, Yasmine suggests that she fill in for his missing date — or, as she calls it, an act of "universe recalibration."

We don't learn much about Madeleine (Julia Garner), whose romantic life is dominated by self-described "daddy issues" in the sixth episode. She kisses a boy below a park bridge, looking happy, but it's unclear where this moment fits (it's possibly the same nameless boy she slept with?).

The series finale dives deeper into an early moment shared between a gay couple (Andrew Scott and Brandon Kyle Goodman) and Karla (Olivia Cooke), the woman experiencing homelessness whose baby they adopt. In their dedicated episode, the trio is full of uncertainty — three very different people working to understand and trust each other with this new life they're all related to. The finale, though, reveals the audience never had much to worry about. When Karla arrives to stay at their apartment in the weeks leading up to the birth, she asks a friend to wait for her, just in case the couple don't seem like the loving parents she envisioned for her baby. Within moments, as the couple warmly bickers over baby prep in the background, we see her go to the window and wave off her getaway car, sure in her decision before they hardly know each other at all.