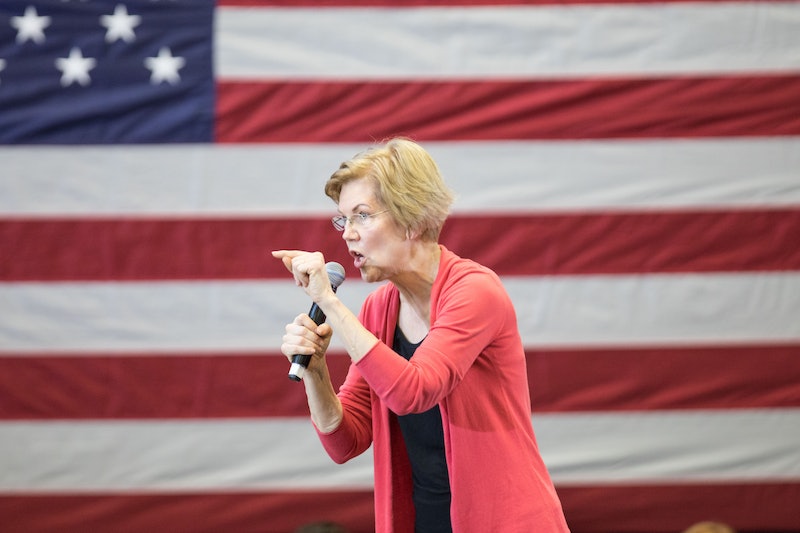 The 2020 Democratic field officially got a little bit more crowded. Sen. Elizabeth Warren formally announced her presidential campaign at a rally Saturday in Massachusetts. But while the congresswoman could have opted to officially kick off her campaign in one of Massachusetts' most populated cities, Warren instead announced her campaign in a historic location that once saw thousands of women and immigrants lead a major labor strike.

Warren continued the message of resistance she grabbed onto in 2017 while addressing supporters from Everett Mills in Lawrence's downtown Saturday. "It won't be enough to just undo the terrible acts of this administration," she said. "We can't afford to just tinker around the edges – a tax credit here, a regulation there. Our fight is for big, structural change."

The congresswoman called it "the fight of our lives" and said she was in it "all the way."

But Warren's decision to launch her campaign at Everett Mills, once the site of a historic women-and-immigrant led labor strike, said just as much about her campaign platform as the candidate herself. While Everett Mills now operates a business center, it was a massive textile factory with a large international workforce in the early 1900s and the site of the Bread and Roses Strike in 1912.

According to History.com, women workers at Everett Mills went on strike on Jan. 11, 1912, after discovering their weekly wages had been cut by 32 cents. The strike quickly spread to encompass other mills in the city, with thousands of female and immigrant workers walking off the job.

"The women said 'enough is enough.' They shut down their looms and walked out," Warren told supporters gathered in front of Everett Mills on Saturday. "Soon workers walked out at another mill in town. Then another. Then another  — until 20,000 textile workers across Lawrence were on strike."

"These workers  —  led by women – didn't have much," Warren continued. "Not even a common language. Nevertheless… they persisted!"

In an attempt to force the workers back to work, mill owners hired men to make trouble while city leaders turned police and even the state's militia on strikers, records from the Digital Public Library of America show. After months of picketing, clashes, growing national support, and a Congressional inquiry, the striking workers won overtime pay, safer working conditions, and a 15 percent pay raise.

In the end, striking workers behind the Bread and Roses Strike in Lawrence improved wages and conditions for hundreds of thousands of other textile workers across the New England region, according to History.com. The historic strike has also been credited with helping spur other industries to implement better wages and improved workers rights.

"The story of Lawrence is a story about how real change happens in America," Warren said Saturday, driving home the symbolic importance of her rally location. "It's a story about power  —  our power  —  when we fight together."

The senator went on to say that millions of American families still struggle today to "survive in a system that has been rigged by the wealthy and the well-connected." Evoking worker-centric themes of resistance, Warren rallied the crowd with a message of bringing the power back to the people.

"Like the women of Lawrence, we are here to say enough is enough!" she said.