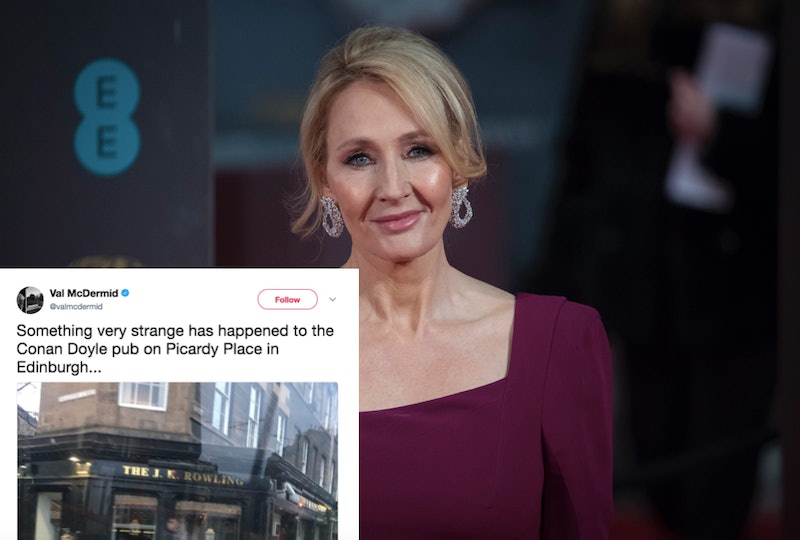 Throughout her illustrious career, author J.K. Rowling has received many accolades and honors, including the Hans Christian Andersen Award, the Edinburgh Award, and Companion of Honor, among others. Now, she can add "restaurant namesake" to the list, because a popular Edinburgh pub has been renamed in honor of J.K. Rowling — temporarily, that is.

Established in 1873, The Conan Doyle pub in Edinburgh was originally named after the Sherlock Holmes author, who was born at the nearby York Place in 1859. For years, fans have flocked to the site to celebrate the famous Scottish writer with a pint of cold ale and a discussion about their favorite Holmes mystery, but this week, the pub gained a new level attention when it was revealed it had been temporarily renamed The J.K. Rowling.

Without warning, The Conan Doyle was transformed overnight into a pub honoring a different author. The original name appeared to be painted over with the new title, The J.K. Rowling, and a portrait of the Harry Potter author eating pub food was hung where a painting of Doyle used to reside. While it seems the actual pub hasn't changed much — to many people's dismay, there is no Butterbeer on the menu — the new name has a lot of people talking.

To many, the change seemed odd and a little bit confusing. As fans know, Rowling wrote the Harry Potter books at Edinburgh's The Elephant House cafe. However, it is The Conan Doyle that was re-branded in order to honor the author at the expense of another. Why, you may be asking yourself, would the owners of the famous spot decide to do such a thing? It was a question on a lot of local's minds, and needless to say, they had a lot of ~feelings~ about it.

While some Potterheads were delighted for another place to visit that celebrates their fandom, even more were distraught over the unexplained renaming. Some even took to Twitter to express their disappointment, and even demand the pub be restored to it's previous name:

Though locals were quick to express their disappointed over the name change, they don't have to worry about missing The Conan Doyle for very long. According to The Edinburgh News, the change is only temporary and part of a larger art installation, Message from the Skies. A collaboration between crime writer Val McDermid, theater director Philip Howard, and Double Take Projections, the visual art installations seek to honor the streets, buildings, and locations that inspired some of the most famous authors to visit Edinburgh. In particular, the famous pub's renaming is intended to honor women writers, including, of course, Rowling, who lived in Edinburgh when she wrote Harry Potter and the Sorcerer's Stone over 20 years ago.

Message from the Skies lets visitors go on a literary journey throughout the city and celebrate all Edinburgh has helped inspire. While classic authors like Conan Doyle have long been celebrated for their work, twenty-first century authors, including Rowling, deserve equal attention for their literary contributions, too, according to the creators of the installation.

“Conan Doyle attracted crowds queuing up to get the next installment of Sherlock Holmes," explains a spokeswoman for the entertainment company responsible for the Edinburgh's Hogmanay celebrations including Message from the Skies, Underbelly Events. "Today J.K.Rowling has had Harry Potter fans queuing outside book shops for his next adventure."

Message from the Skies will be on display throughout January. Visitors interested in learning more about the famous landmarks that inspired some of literature's greatest legends can download the accompanying app and follow the story as they explore Edinburgh. If they're lucky, they might even get a a chance to stop into The J.K. Rowling for a cold pint — that is, if Potterheads haven't completely filled the place up already.