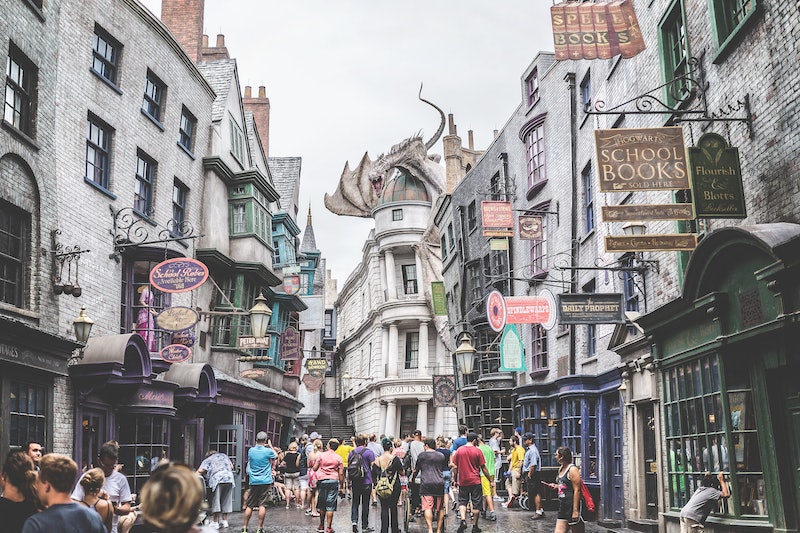 There are all different types of travelers. Some like to explore old building and soak up the history of a city. Some like to wander through museums and load up on culture. And some like to visit places that have something to do with Harry Potter. Can you guess what kind of traveler I am?

A couple of years ago I spent some time studying in Northeast England, and as you can imagine, I was pretty excited to be in the birthplace of Harry Potter. I made it my mission to visit as many Harry Potter locations as I could, whether those were filming locations or just sites that inspired some aspect of the series. Of course, it's fun to visit the theme park or check out the studio tour, but I wanted the real deal: I wanted to see where the magic happened (literally!).

I've been lucky enough to visit many of the places below (I'm the woman looking ecstatic in many of the pictures), but a few of them are still on my bucket list. Try to resist buying a plane ticket to the United Kingdom if you can, but if you cave, I certainly won't blame you. In fact, take me with you!

All Harry Potter fans know the story of The Elephant House: J.K. Rowling would sit at a table in the back room of this cafe and draft the early Harry Potter novels. While I'm sure Rowling could have written the novels without the help of Elephant House's caffeine and pastries, I can't help but think we owe something to the cafe. Stop in for a snack, and make sure to check out the bathrooms, where fans have covered the walls with Harry Potter-themed graffiti.

Alnwick Castle is basically Hogwarts. The working castle (yes, the Duke of Northumberland still lives there part of the year!) has been used to film a number of Harry Potter scenes, including shots of the Forbidden Forest, exterior shots of Hogwarts, and, most famously, Harry's first flying lesson. If you find a particularly nice employee and explain that you're a huge Harry Potter fan, occasionally they'll let you borrow a broomstick from the "flying lessons" and teach you how to make it looks as though you're in flight!

Remember how we were just talking about how Rowling would sit in the Elephant House and write? Well, from the back of the cafe you can look over Greyfriars Kirk and the George Heriot's School, which is claimed to be the inspiration for Hogwarts. If you were to go strolling through that kirk, as Rowling used to, you'll start to see some familiar names, including a McGonagall and a... Thomas Riddell?

Yes, Platform 9 3/4 is now a real thing, and yes, you can take a picture pretending you're about to run through the barrier. Is it super cheesy and touristy? Of course it is, but that doesn't mean you shouldn't do it! In fact, if you're a Harry Potter fan in London, you should be required to visit Platform 9 3/4 and appease your inner child by pretending you have to run to catch the Hogwarts Express.

So technically this isn't Diagon Alley, but it sure looks like it, right? The Shambles, a street of shops in York, is said to have inspired the narrow, winding roads of Diagon Alley. And while you can't actually buy your required wands and spellbooks here (believe me, I tried), it's definitely worth stopping to take a picture and pretend that you're on your way to pick up your owl.

Ever wanted to ride the Hogwarts Express? Why am I even asking that question? Of course you have. Well, if you find yourself in Scotland you can come pretty darn close. Fans of the movies will recognize this bridge that the Hogwarts Express passes over on the way to Hogwarts. It's actually the Glenfinnan viaduct, and if you hop aboard the West Highland Line you can cross it yourself and pretend you're off to learn some magic.