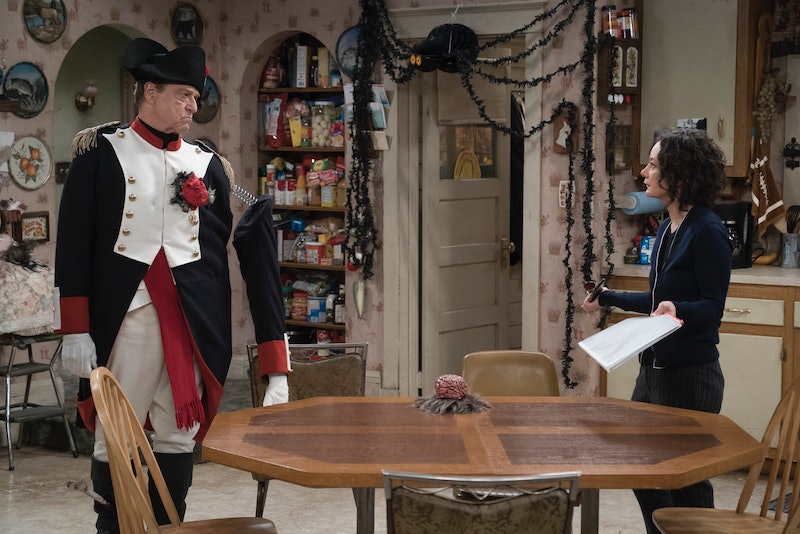 On the original Roseanne series, Halloween episodes were a big tradition for fans, and now, on the show's spinoff, it seems like that tradition is continuing. On Tuesday night's episode, there was a debate about offensive Halloween costumes on The Conners, and this time, the holiday ended up highlighting how more socially aware people are about their costumes than they were when the original show aired in the '90s — including the members of this TV family.

If you watched Roseanne the first time around, you know that the episodes were funny and, often, a little gory (which definitely happened this year with Jackie's disemboweled cheerleader costume). Basically, nothing was off limits, but thanks to Mark's school, this wasn't the case on The Conners.

After the family got dressed for a Halloween photoshoot (including Becky as Sharknad-O'Connor and Harris as Lizzie Boredom) Mark delivered some bad news: His Fortnite costume wouldn't be allowed at the school carnival because it was deemed too violent and against the dress code. This sparked a major disagreement between Darlene and Dan about whether or not "PC costume rules" have gone too far. Darlene wanted to find a different costume for Mark that was allowed at the carnival, but Dan wanted her to fight it, saying that people are too sensitive.

Hot button topics are something that the Roseanne spinoff tackled earlier this year, but this is the first time The Conners has taken this route — and it brought up an important question when it comes to considering Halloween costumes. Darlene made Mark create a new costume, which ended up being Frida Kahlo, his favorite artist, complete with her signature eyebrows and a colorful dress. When he and Darlene arrived at the carnival, however, he was still turned away because his principal told him he was appropriating Mexican culture.

"No, it's cultural appreciation. He loves Frida Kahlo," Darlene argued. But to no avail.

"The guidelines were clear. He has not experienced what a person of that ethnicity has experienced," the principal said. "Therefore, he does not have a legitimate entitlement to use or wear any element of their ethnic identity."

Even though Darlene had just argued with her dad that costumes should never offend people, she didn't back down, insisting that Mark should be judged on an individual basis and that "sometimes the good intention of the rule gets taken a little far."

This issue and this episode raises an important question: Since Mark didn't change the color of his skin and simply wore what Kahlo would have worn, was it actually cultural appropriation? Or was it still offensive? Of course, it's still possible to appropriate culture without wearing black or brown face, but Mark's situation is a bit more nuanced since he was copying traits specific to Kahlo, like her iconic unibrow, and not her culture. Ultimately, it should be left up to members of the culture which people are dressing up as to decide what is and isn't acceptable.

In the end, Darlene said that both her father and the principal were wrong. Dan wasn't right for believing costumes can never be offensive — they definitely can — but Darlene wasn't ready to agree with the principal's decision to keep Mark out of the carnival, either.

It's too early to say for sure, but based on this episode, it seems like The Conners may not be as conservative as Roseanne was. And maybe, because of that, the show will continue to explore important social issues, but from both sides of the aisle, not just one.