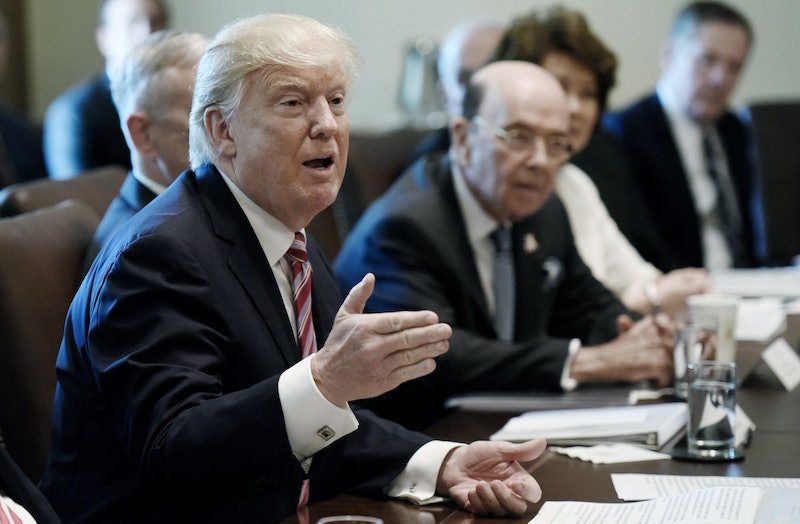 U.S. presidents haven't been using social media for very long, and as a result, the legal status of President Trump's tweets, for instance, is still ambiguous and ill-defined. That may soon change: On Monday, Illinois Democratic Rep. Mike Quigley introduced the COVFEFE Act, which would make a presidents' tweets and other social media posts part of the official presidential record. "COVFEFE" here stands for "Communications Over Various Feeds Electronically for Engagement," but we all know what it really means, don't we?

Quigley's legislation would amend the Presidential Records Act, which regulates the preservation of presidential communications, to include social media posts. It's rather wide-reaching: If enacted, the bill would mandate the preservation not only of tweets from the official @POTUS account, but also Trump's personal Twitter, @realdonaldtrump, from which he does most of his high-profile tweeting. It could also potentially make it illegal for Trump to delete old tweets, as he did with his infamous "covfefe" post.

Quigley wrote in a press release:

In order to maintain public trust in government, elected officials must answer for what they do and say; this includes 140-character tweets. ... President Trump's frequent, unfiltered use of his personal Twitter account as a means of official communication is unprecedented. If the President is going to take to social media to make sudden public policy proclamations, we must ensure that these statements are documented and preserved for future reference. Tweets are powerful, and the President must be held accountable for every post.

This matters more than it may seem, as presidential tweets can occasionally have a direct impact on policy. The same day that Quigley introduced this legislation, the Ninth Circuit Court of Appeals upheld an injunction against Trump's travel ban, citing a tweet the president had sent about the policy in justifying the decision.

"In short, [the travel ban] does not provide a rationale explaining why permitting entry of nationals from the six designated countries under current protocols would be detrimental to the interests of the United States," the decision read. "Indeed, the president recently confirmed his assessment that it is the 'countries' that are inherently dangerous, rather than the 180 million individual nationals of those countries who are barred from entry under the president's 'travel ban.'" This was a reference to Trump's recent proclamation on Twitter that "we need a TRAVEL BAN for certain DANGEROUS countries."

Currently, the protocol regarding Trump's tweets is somewhat vague. A spokesperson for the National Archives told the Associated Press in January that Trump's tweets would be considered official presidential records, and thus preserved, but that the agency hadn't yet established a policy regarding deleted tweets.

Later, White House Press Secretary Sean Spicer said that Trump's tweets are "considered official statements by the President of the United States," yet that opinion isn't necessarily legally-binding. The COVFEFE Act would clear up these ambiguities.

This isn't the first time Quigley has chosen a pithy acronym for a piece of Trump-related legislation. In March, he co-sponsored a transparency bill called the Making Access Records Available to Lead American Government Openness Act — that is, the MAR-A-LAGO Act.