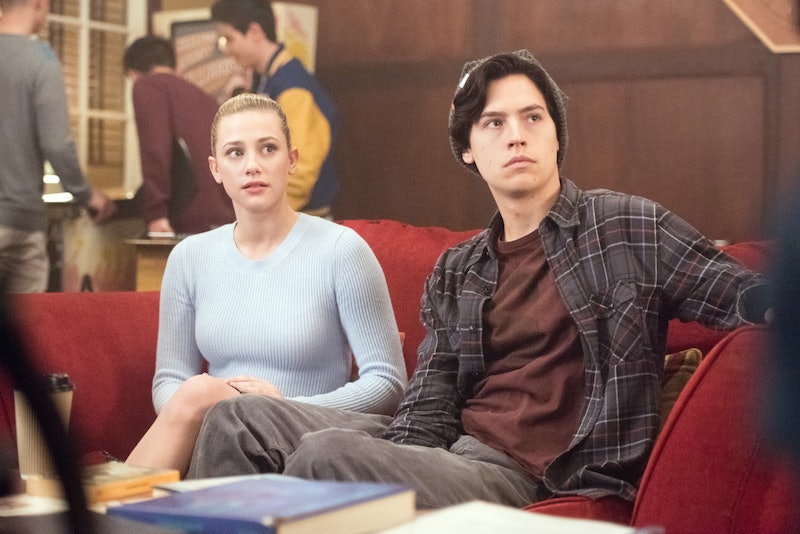 The possibilities are endless on Riverdale, especially when it comes to the murder of Jason Blossom. There have been tons of crazy Riverdale fan theories relating to Jason's murder and various other plot points on the show. So, I've decided to round up some of the best that I've seen thus far (that haven't already been proven wrong). Originally, I was super on board with the idea that Betty and Polly were the same person. It seemed like a shocking twist that we'd see in Pretty Little Liars. However, I was also happy with the pregnancy plot twist. There are so many questions at this point, but knowing the CW, we will only get a handful of answers in the Season 1 finale.

The whole Blossom crew was out for blood during the annual maple-tapping event on last week's episode. The extended family is trying to take over the family business and oust Cheryl from her rightful place. Meanwhile, the Blossom parents are trying to bring Archie into the mix as Cheryl's date, promising access to a top music program in exchange for attending. Why Archie went along with this and ruined his relationship with Valerie, I will never understand. Sure, some suspicious stuff goes down as usual, but the most important take-away from the episode is that Polly is staying with the Blossoms in order to dig into Jason's murder.

I can only assume that things are going to get even crazier, and these Riverdale fans have come up with theories that seem a little out there, but also make a ton of sense.

At this point, we know that FP Jones is an alcoholic and Jason's letterman jacket is in the closet at his house. It would seem like he's somehow involved with Jason, even if he's not the murderer. The last time viewers saw that jacket was in the car before it was set on fire. There's definitely some suspicious activity there.

One Reddit user pointed out that FP could have killed Jason on accident, thinking he was Archie. We know that FP is still upset with Freddie for ousting him from the construction company they built together, so he could have been seeking revenge by killing Archie. In his drunken stupor, he maybe accidentally killed Jason since the two boys look pretty similar.

I personally think that FP is a red herring. He may have been hired to burn Jason's car, but I don't think he actually pulled the trigger.

Miss Grundy seemed like an integral part of the first few episodes, and then she just agrees to disappear without a trace? Something never added up about that, and some fans believe that the ex-husband found her and killed Jason Blossom. After all, Archie wasn't the only one getting private lessons from Grundy.

On the flip side, he may have thought that Jason was Archie and killed him accidentally. This also seems somewhat plausible.

3. 'Riverdale' Is Heading To The Afterlife

As crazy as it may seem, this theory is looking more and more plausible as the show goes on. The show runner of Riverdale, Roberto Aguirre-Sacasa, also happens to be the creator of a comic book series called Afterlife with Archie and it’s basically the Archie comics during a zombie apocalypse. In the comics, Sabrina Spellman, or you may know her as Sabrina the Teenage Witch, accidentally starts the apocalypse when she tries to bring back Jughead’s dog from the dead. The dog bites Jughead — and voilà, the end of Riverdale as we know it.

After one fan on Reddit pointed out different hints showing that Afterlife could be coming, Aguirre-Sacasa told Entertainment Weekly that “there’s a chance that happens.” He even went on to confirm that they’ve planted clues to that idea:

"The Easter eggs, and the nods, and the allusions to horror and Afterlife with Archie continue throughout the season … We’re trying to keep the door open to anything being possible on the show."

Things could be deadly next season.

This is a fun theory, but also pretty gross if Cheryl continues her quest to date Archie. With all the issues between the older generation of Archie characters, it wouldn't seem too farfetched that affairs may have been happening behind the scenes. One theory suggests that Archie is actually the biological son of Clifford Blossom and that's why he was pushing so hard for Archie to be a part of the maple syrup event, especially since he's now without a male heir to the family fortune.

We don't know much about Archie's mom, other than she's played by Molly Ringwald, so this theory is very much still in play right now.

5. Sabrina Will Be One Of Polly’s Twins

It has been confirmed that Sabrina Spellman will make her first appearance in Riverdale during the Season 1 finale, but no one knows any details just yet. One reddit user is convinced that Sabrina will be one of Polly's twins, and she will give birth in the finale. It's not too crazy of a theory considering in the Sabrina the Teenage Witch series, she actually had an evil twin sister.

Could Sabrina and Katrina be Polly's children?

Yes, it’s been confirmed that Betty and Polly are not the same person, but people are still convinced that Betty’s “Polly” alter-ego had something to do with Jason's murder.

It was very clear in the revenge against that football player earlier this season that something happened to Betty where she was convinced that she was Polly. Then, when Veronica brought it up, she denied it ever happened. Could momentary memory loss be what led to Jason's murder? Some fans think Betty may be repressing the memory of the murder.

Here's an interesting one: One Reddit user suggests that this plot mirrors Romeo and Juliet, and with the Blossom and Cooper families at odds, it isn't that hard to understand where the parallels come in.

The user suggests that Jason snuck away to be with Polly, and when he showed up at the Cooper's home, the parents told him that she was dead. Overcome with grief, Jason ended up killing himself a week later, unable to live without her.

I like the idea of this one, but of all the theories, it seems the most unlikely because of the way Jason died. He would have already gone to Polly's before crossing Sweetwater River, since both the Blossom family and Cooper family live on the Riverdale side. He was also shot in the forehead, which is not really the angle one would shoot themselves at. However, I do love a good Romeo and Juliet re-telling so I kept this on the list.

By the end of the next episode, I'm sure the never-ending theories will continue rolling in.

More like this
The New Grey's Anatomy Interns Have Fans Feeling So Nostalgic For Season 1
By Brad Witter
Nicola Coughlan Shared A Lady Whistledown Excerpt From ‘Bridgerton’ Season 3
By Grace Wehniainen, Alyssa Lapid and Sam Ramsden
A New 'And Just Like That' Table Read Pic Confirms A Key Character's Return
By Jack Irvin and Grace Wehniainen
You’ll Definitely Recognise Both Of Ty Tennant’s Parents
By Maxine Harrison
Get Even More From Bustle — Sign Up For The Newsletter