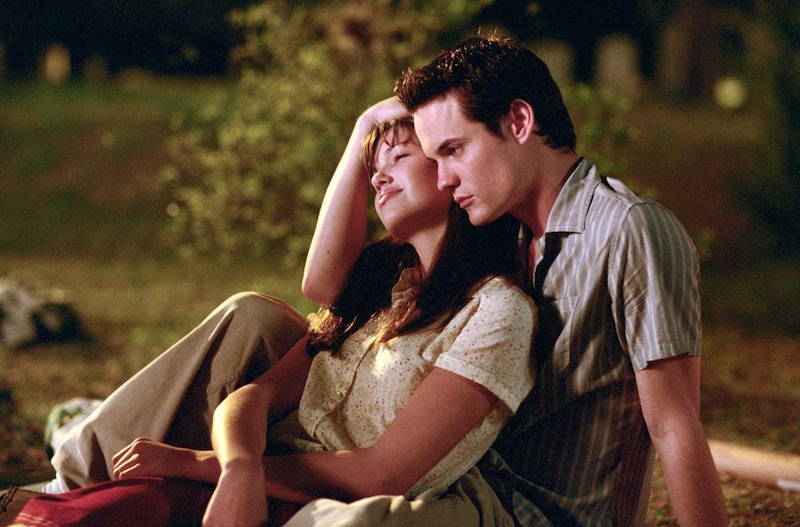 Before The Fault In Our Stars broke everyone's hearts into a million pieces, Nicholas Sparks made us all cry on the regular with movies like A Walk To Remember. The Mandy Moore film came out in Jan. 2002 and, spoiler alert, focused on a love story between Jamie and Landon, an unlikely high school couple whose romance was cut way too short. While viewers are now well-versed in the devastating twists every Nicholas Sparks movie contains, back in 2002, we were novices who hadn't prepared ourselves. But there's one A Walk To Remember fan theory you need to know about, especially if you're desperate to see actors Moore and Shane West reunite once more.

Even though the movie had a pretty clear-cut ending, in which Moore's character Jamie died following a battle with leukemia, fans still hold out hope that they'll see the couple reunited once again. Speaking about the novel version, author Sparks said he purposefully left the ending of A Walk To Remember open-ended, so that fans could make up their own minds about whether or not Jamie survived. On his official website, Sparks said:

"As to whether she actually lived or died, it's ambiguous and purposely meant to be that way. If you wanted Jamie to live, she lived. If you knew that Jamie would die, she died. As for me... I thought there was a good chance that Jamie lived."

So is there even the remotest chance that Jamie is alive?

The ending of the movie is pretty definitive, but that hasn't stopped fans theorizing about Jamie and Landon's life together as a married couple. And Sparks is fascinated by the fan debate surrounding Jamie's fate in A Walk To Remember. On his website, the author said, "As far as I can tell, about 70% of the people think Jamie passed away, another 30% believe she lived, and when asking the question, they offer ‘'proof' for their reasoning." A huge piece of this so-called "proof" seems to hinge on the fact that Landon won't take his wedding ring off, and says that he has no reason to ever do so. Could this mean that Jamie survives?

Unfortunately, the movie makes it pretty clear that Jamie is dead, but the mere act of loving her inspired Landon to do great things. However, there are several ways that fans can relive their love for Jamie and Landon. A musical version of A Walk To Remember previews in 2017, starring Pretty Little Liars actor Janel Parrish as Jamie. Plus, Moore continues to speak well of co-star West, and even suggested that there needs to be a reunion of the A Walk To Remember cast. Back in Sep. 2016, Moore told People, "I feel like we should get together with as much of the cast that is around and see if we can finagle a social media picture or something like that." This has to be a priority!

While the movie didn't leave much room for ambiguity when it came to Jamie's fate, fans have held on to the possibility that Jamie survived, imagining that her and Landon are living a beautiful life together somewhere. I'm totally hoping that the A Walk To Remember musical tours, helping to keep the classic love story alive.