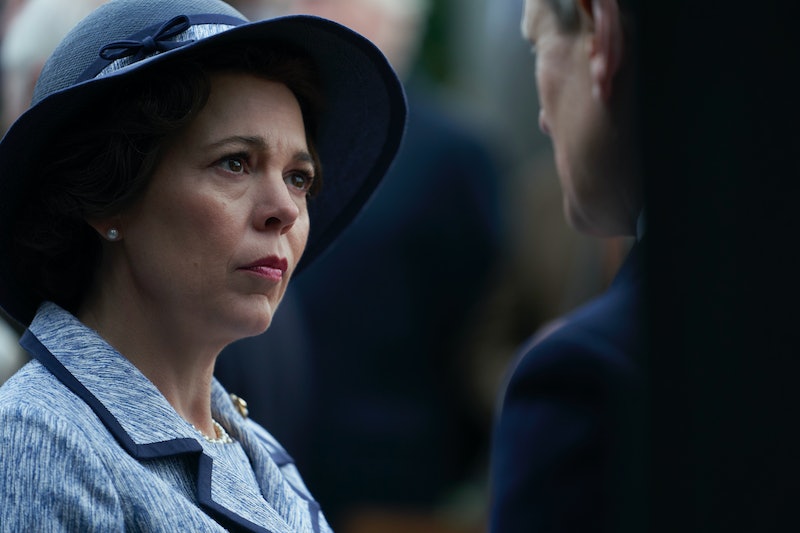 In an effort to halt the spread of the new coronavirus (COVID-19) across the globe, many film and television companies are halting production. One series is hoping to wrap up filming while complying with disease prevention protocol, and The Crown will continue filming season 4 amid the coronavirus crisis, according to Deadline. Left Bank Pictures made a decision to move forward with production on The Crown, which is reportedly in its final week. Representatives from the company noted that series needed only to wrap up loose ends. Bustle reached out to Netflix for comment, but did not receive an immediate response.

On Monday, Netflix halted production on The Witcher, making it the first production in the United Kingdom impacted by the outbreak response, according to The Hollywood Reporter. Filming on the fantasy video-game adaptation series was suspended for two weeks, during which cast and crew will reportedly be paid. Meanwhile, the streaming service is reportedly in talks with other production partners and projects in the U.K, of which there are approximately five, including Left Bank.

The Crown and The Witcher aren't the only series filmed in the United Kingdom that faced potential setbacks this week. On Monday, BBC revealed delays to Peaky Blinders and Line of Duty, both hit dramas produced by the network, as per The Guardian.

The United Kingdom is far from the only country with a film and television industry potentially facing production delays in the coming months. On Friday, Netflix shut down all film and television production in the United States and Canada, according to Deadline. The media company halted production beginning on Monday, March 16, and continuing for two weeks, in compliance with bans on large gatherings, travel, and other restrictions from authorities in the United States.

Many popular Netflix series will be affected by the shutdown, including Stranger Things, which recently began production on Season 4, as well as the upcoming Sex/Life, which was set to star Sarah Shahi, according to Deadline. Ryan Murphy's Netflix movie, The Prom, will also be shut down. Netflix series created in partnership with outside companies, such as Grace & Frankie, will also suspend production.

The Crown's decision to proceed with production may be surprising, given the urgency, but the streaming giant did note that they would be evaluating different series on a case-by-case basis. If the series is almost wrapped, it might be more prudent to conclude filming with as minimal a crew or a cast as possible, than to bring everyone back to set later.