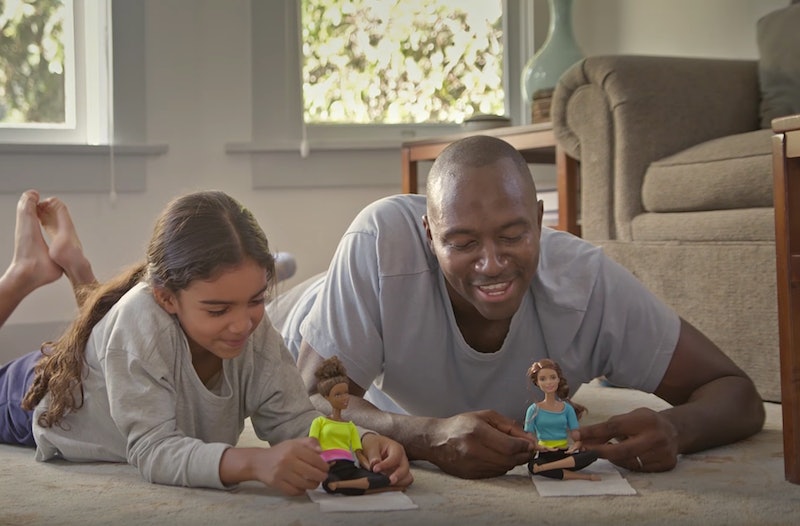 “NFL playoffs” and “Barbie dolls” might not be two phrases you put together that often (or, you know, ever), but on Sunday, football fans who tuned in to watch the Patriots battle the Steelers were treated to a commercial about the iconic fashion doll. Mattel’s new “Dad’s Who Play Barbie” ad campaign is targeted less at little girls and more toward their fathers — and sends the key message that gender stereotypes shouldn’t keep men from fully participating in their daughters’ lives, even if that means (gasp!) playing with dolls.

At the beginning of the commercial, a bearded guy with his daughter on his knee describes himself as “a typical man’s man.” “Sundays are always football,” he remarks, “and now, that gets interrupted with a little, um, Barbie time.” What follows is a montage of epic adorableness as a number of dads have “Barbie time” with their little girls, getting fully immersed in their kids’ play. The girls make believe that Barbie is an astronaut, a doctor, a yoga teacher, and a firefighter, and the dads jump right into it, play-voices and all. The ad’s tagline: “Time spent in her imaginary world is an investment in her real world.”

The ad is part of a push on Mattel’s part to highlight connections between fathers and daughters. Lisa McKnight, general manager for Barbie at Mattel, explained to Fast Company, “It's about getting parents to buy in, rather than just buying. We're certainly not ignoring moms, but dads bring a different perspective to playtime with their daughters, and are also just getting more and more involved, so we wanted to include them in our message.” Adweek reports that the men and girls in the ads are real fathers and daughters, and their interactions were unscripted.

In developing its “You Can Be Anything” campaign, Mattel consulted Wake Forest University professor Linda Nielsen, whose research examines the long-term impact that father-daughter relationships have on girls. In an article for the Institute of Family Studies blog, Nielsen explains,

As you might guess, daughters whose fathers have been actively engaged throughout childhood in promoting their academic or athletic achievements and encouraging their self-reliance and assertiveness are more likely to graduate from college and to enter the higher paying, more demanding jobs traditionally held by males.

Nielsen praises the Mattel spots for dismantling restrictive stereotypes about masculinity. “No one is supervising, no one is telling Dad what he should be doing,” Nielsen told the Triad Business Journal. “They show fathers being silly and attentive, all those things they say men aren’t good at. They take every myth about men and bust them apart.”

Since the ad aired on Sunday, fans have taken to Twitter to express their approval.

The best part of the public response to the ad campaign might be that it’s encouraged people to post pictures from their own lives with the #DadsWhoPlayBarbie hashtag. Just look at these adorable humans:

Obviously, these ads are marketing tools for Mattel and are, first and foremost, meant to sell Barbies. But even for parents whose kids don’t love dolls (because not all kids do), the ads highlight the power of parents fully engaging in their children’s imaginative lives, and they show that tired conventions of “what moms do” and “what dads do” don’t have to limit the way parents relate to their kids.