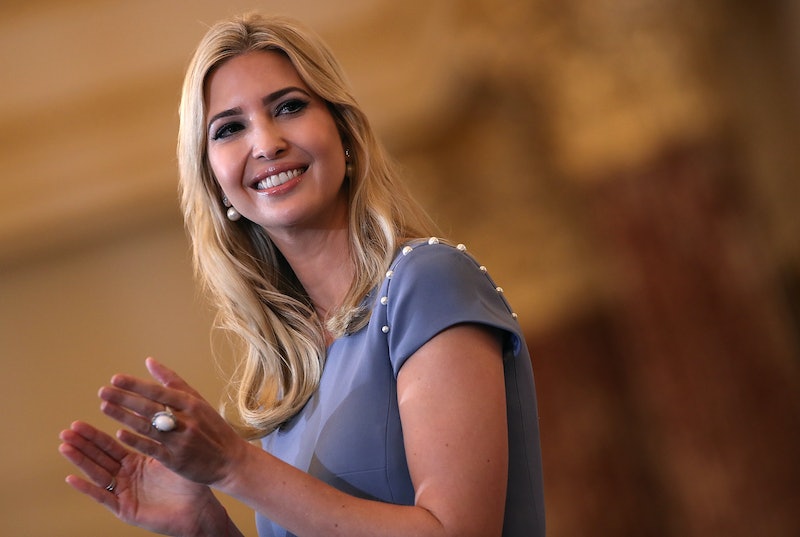 On Wednesday night, The Daily Show's Michelle Wolf slammed Ivanka Trump's feminism — or rather, fake feminism — by picking apart her policy proposals, concluding that most women (that is, women who aren't rich) wouldn't benefit from them. When host Trevor Noah pointed to Trump's maternity leave and child care policy proposals as examples of why she might be seen as a "feminist icon," Wolf responded, "That's her brand. It always has been."

The segment reflected a general disillusionment with Trump and her alleged feminism. During her father's campaign, Trump appeared to be a moderate force who would serve as a voice of reason during his administration, but she has had the tendency to be silent on issues that don't directly benefit her. She tried to sell her maternity leave and child care plans because they were palatable for her brand as a working woman, as Wolf explained. But when it comes to issues like transgender student protections, for example, Trump hasn't said much, despite claiming to support LGBTQ Americans.

"She's not trying to change the patriarchy," Wolf told Noah. "She's telling women how to silently slide into it, like a DM." Added Wolf:

So, before you put too much hope in Ivanka, remember: She promotes a brand of feminism that makes her rich by exploiting the very people she's claiming to help. That's not being a feminist — that's being a Trump.

In criticizing Trump's brand, Wolf provided specific reasons for which her proposals aren't nearly as feminist as they seem. Her maternity leave plan would only benefit married women like her — married birth mothers, specifically, according to the ACLU — but completely ignores single mothers. Her child care plan, meanwhile, "proposes a tax deduction for the cost of child care," Wolf said, "but that does nothing for poor people; they have nothing to deduct from."

Wolf didn't stop there, either. She took a close look at Trump's advertising strategies, in which the first daughter appears to assert that dresses are a "secret weapon" for working women, rather than their skill sets.

"This isn't feminism, this is 'women be shopping,'" Wolf joked. "Ivanka's feminism is the Lululemon model. It's for rich white women, and you can see right through it."

But it isn't just that Trump's policy proposals are inadequate; her "feminist" brand also lets a lot of things slide. In response to the common misconception that Trump could be a voice of reason in the White House by reigning people in, Wolf observed that Trump made light of sexual harassment in her 2009 book, The Trump Card: Playing to Win in Work and Life.

"Sexual harassment is never acceptable, and we must stand against it," Trump wrote in her book. "At the same time … learn to figure out when a hoot or a holler is indeed a form of harassment and when it's merely a good-natured tease that you can give back in kind."

Trump claims to represent working women, but Wolf was right to say that her brand and policies are really only intended for women like her: rich, married white women who faced very few obstacles in their path to career advancement. It should no longer come as a shock to anyone that Trump is not and has never been in solidarity with the majority of women, but Wolf's choice to call out her fake feminism should dispel any last shreds of hope that Trump wants to — or is even able to — effect concrete change.