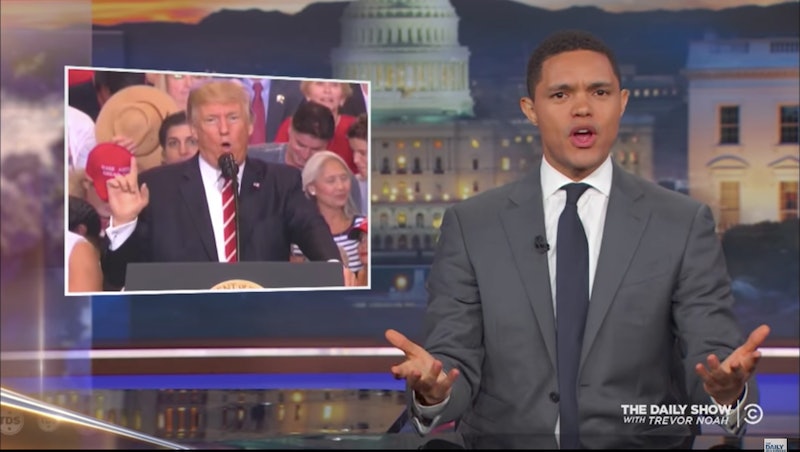 The Daily Show With Trevor Noah/Youtube
By Lani Seelinger
Aug. 24, 2017

As usual, the good people at The Daily Show did not hold back on criticizing the president for his latest display of insanity at the rally he held in Phoenix. Trevor Noah slammed Trump's Phoenix rally speech as an "outstanding rejection of sanity" — and that wasn't even one of the most cutting lines.

Noah delved into the particulars of the Trump's speech at the Phoenix campaign-style rally, which covered everything from Trump's new "plan" on the border wall to the criticism lobbed at him over his comments after the violence in Charlottesville. He opened with some comparatively light-hearted comments about Ben Carson "[coming] out of hibernation to lukewarm-up the crowd" and the "fire and fury" that Trump brought. And then, of course, as so much commentary about Trump does these days, Noah's monologue turned to Trump's continued failure to adequately respond to Charlottesville.

"There was a key issue that he had to address," Noah said, "And that was demanding justice for the real victim of Charlottesville: himself." The president, Noah points out, went so far as to re-read the first speech he gave after the events — except he left out a couple of keywords. Specifically, the part where he blamed the violence on "many sides," instead of just on the white supremacists and neo-Nazis.

"According to the president, he gave a pitch perfect performance after Charlottesville," Noah went on, before showing the video of Trump listing off, in a bizarre, stilted fashion, the hate groups that he claims to have named. "I'm so glad we didn't elect an irrational woman as president, I really am," Noah said. "He sounds less like a president and more like an angry waiter arguing about an order that he got wrong. 'I got you the neo-Nazis! I got you the fries! I got you the KKK, what more do you want?! I've got it all, I've got it all!'"

After showing clips of Trump's Phoenix speech recounting of the Charlottesvile speech and his actual Charlottesville speech, Noah narrowed in on Trump's decision to remove the "many sides" line that caused such a huge furor from his Phoenix speech. "Leaving out 'on many sides' erases the context of what happened. Like in any story, if you remove a crucial piece of information, of course the story will change," Noah began. "Like in Charlie and the Chocolate Factory, if you remove the chocolate factory, now Willy Wonka is just a pedophile."

Noah then revealed footage of something that many of his viewers might have some difficulty wrapping their heads around: Trump supporters, unsure of why they saw protesters on the way to the rally. "Have you been living wherever Trump hides his tax returns?" Noah asked, incredulously. They might not be able to see why the nation is so divided over this issue — but Noah does, and you can be thankful that he gets to comment on the matter so regularly.