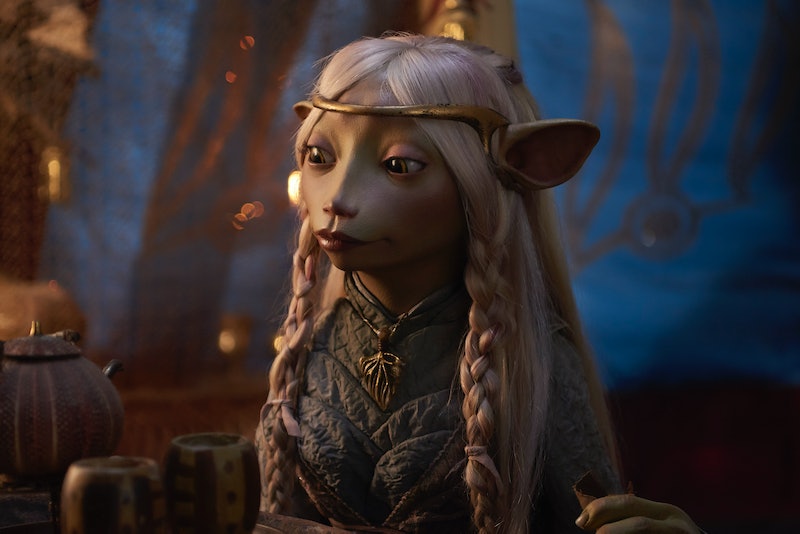 Jim Henson's 1982 puppet fantasy film The Dark Crystal is getting a prequel series on Netflix this Friday, and the production boasts a pretty impressive cast of voice actors, all lending their talents to the unique animation style. Using the same technology of puppeteering and animatronics that Henson was known for, The Dark Crystal: Age of Resistance returns fans to the world of Thra with all new, lovingly crafted characters.

For those unfamiliar, the original film focused on Jen and Kira, two Gelfings (an elven-like race) who set out to save their planet from evil vulture-like creatures called the Skeksis, who survive by draining the life force from other creatures. The new Age of Resistance series will focus on three new Gelflings named Rian, Brea, and Deet, who discover the horrifying secret behind the Skeksis’ power, and so set out on a journey to ignite the fires of rebellion and save Thra from their clutches.

The original film is a cult classic, so it's no surprise Netflix and the Jim Henson Company were able to pull together such a talented cast of actors. Taron Egerton will play Rian, who begins as a castle guard of the Stonewood Clan. Egerton is best known for his role as Eggsy in the Kingsman films; he later starred as Elton John in the biopic Rocketman.

Anya Taylor-Joy will voice Brea, a Gelfling princess of the Vapra Clan. Taylor-Joy rose to prominence as Thomasin in The Witch, a period horror film set around the same time as the Salem Witch Trials. Taylor-Joy might also be recognizable as Casey Cooke in Split and Glass, the only girl to survive The Horde's reign of terror.

Then there's Nathalie Emmanuel as Deet, a Gelfling animal carer of the Grottan Clan. Emmanuel is most recognizable as the actor who played Missandei on Game of Thrones. Emmanuel is currently the star of Hulu's miniseries Four Weddings and a Funeral.

Rounding out the main cast is actor and puppeteer Donna Kimball as Aughra, the same astronomer that featured in the original film (though likely much younger here).

Those are the central characters in the show, but the recurring cast is equally as stacked with recognizable names, if not more so. Helena Bonham Carter, for example, will play Brea's mother and queen, while Outlander's Caitriona Balfe and Belle's Gugu Mbatha-Raw will play Brea's sisters. Alongside Emmanuel, both Lena Headey and Natalie Dormer from Game of Thrones will be in the project as well. Tomb Raider's Alicia Vikander will play Rian's girlfriend while Mark Strong will play his father. As for the Skeksis voice actors, the cast includes everyone from Jason Isaacs, Simon Pegg, Benedict Wong and Awkwafina to Andy Samberg, Keegan-Michael Key, and Mark Hamill. Even Sigourney Weaver plays a part in the series!

Though you're used to seeing all these actors in live-action projects, the job of voice-acting still requires incredible time and skill to make it all work. Writer (and super Dark Crystal fan) Jeff Addiss explained to CinemaBlend how the acting and animation go hand-in-hand:

"It's incredibly technical. Because unlike an animated film, [the actors] don't record before we shoot. They have to match to what the puppeteers did on the day, which means they have to match the lip-flaps. Which means that even in rewrites or anything that we did, it had to match the lip-flaps on the screen. So it's funny, the voice actors would come in, and we would warn them that this is how it was going to be, but you could tell that hadn't quite wrapped their heads around it yet until they watched it."

All in all, it's a series made by a dedicated, passionate group of artists, aided by an A-list cast of celebrities. It's no wonder that early reviews of the show are overwhelmingly positive. It looks like the world of Thra is set to enchant a whole new generation of fans.