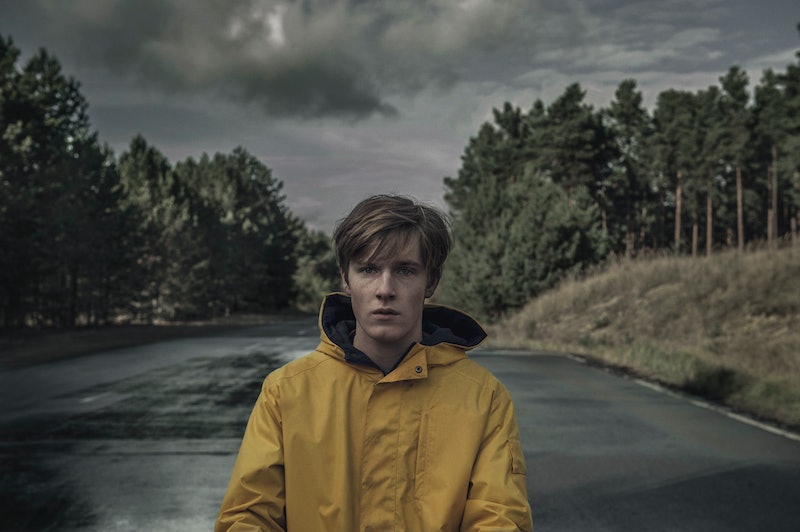 Netflix's Dark is so convoluted, you may need multiple charts and timelines just to follow along. And if you thought you were confused the first time around, you'll definitely need a Dark Season 1 recap before diving back into Season 2. Trying to sum up its plot succinctly is likely a fool's errand, but here's a shot.

The action of the series kicks off with the disappearance of young Mikkel Nielsen, an 11-year-old boy in a town called Winden, where the workforce is largely centered around a nuclear power plant. Mikkel vanished while exploring the woods with his older sister, Martha; his older brother, Magnus; Martha's boyfriend, Bartosz Tiedemann; Magnus' girlfriend, Franziska Doppler; and their classmate, Jonas Kahnwald, Martha's ex who recently returned from a stay in a psychiatric institution following his father's suicide. The group of kids were searching a cave for the hidden drug stash of another missing boy, Erik Obdendorf, when Mikkel vanished.

The disappearances of both Erik and Mikkel are quickly revealed to be linked to a mysterious portal in the caves underneath the nuclear plant; an explosion in the plant in 1986 somehow resulted in the opening of a wormhole through time. Every 33 years, the cosmos line up in exactly the same place, so the wormhole allows a traveler access to either 33 years in the past (1953) or 33 years in the future (2019).

Dark revolves around the interwoven stories of the four families of the kids in the forest that fateful day — whose lives are even more interwoven than they thought, thanks to the wormhole lurking under their town.

On June 21, 2019, Jonas' father, Michael Kahnwald, dies by suicide. He leaves a note for his son, but Michael's mother, Ines, hides it. The stress of his father's death leads Jonas to check himself into a psychiatric institute for the summer, ending his relationship with Martha. (She later starts dating Jonas' best friend, Bartosz.) Shortly after his release, Jonas is present when young Mikkel Nielsen goes missing in the woods.

Later, a man known only as the Stranger delivers a package to Jonas that contains Michael's suicide note and instructions on how to access the wormhole in the caves. The note reveals that Mikkel Nielsen wandered through the wormhole into 1986, was adopted by Ines and raised as Michael Kahnwald, eventually becoming Jonas' father. This ends Jonas' rekindled flirtation with Martha, who Jonas now knows is technically his aunt. Armed with this knowledge, Jonas ventures into 1986 to bring Mikkel home, but is dissuaded by the Stranger, who tells Jonas that such an action would result in his own existence being erased.

Eventually, the Stranger is revealed to be Jonas himself from another 33 years in the future. In 1986, he builds a device with something from all three timelines: a device built by Fransizka's great-grandfather H.G. Tannhaus in 1953, nuclear waste from the plant explosion in 1986, and Ulrich's smartphone from 2019. The Stranger intends to use the device to seal the wormhole at the moment of its creation, but instead ends up being the cause of its creation in the first place. The device ends up catapulting young Jonas into the future, where he awakens in a post-apocalyptic Winden in the year 2052.

The show's explorations through time also reveal more information about Jonas' troubled mother, Hannah, who in 2019 is having an affair with Ulrich Nielsen, the father of Martha, Magnus, and the missing Mikkel. Back in 1986, Hannah was a quiet schoolgirl who harbored an unrequited crush on Ulrich. After witnessing him have sex with his future wife, Katharina, Hannah falsely accused Ulrich of having raped Katharina, leading to his arrest. She also discovered that Winden newcomer Aleksander Tiedemann was living under an assumed identity.

In 2019, Ulrich ends his affair with Hannah after the disappearance of his son, but a vindictive Hannah lies to Katharina (now the Winden high school principal), telling Ulrich's wife that she was the one who ended it, and that he was planning to leave Katharina because he loved Hannah. Using her knowledge of his fake identity, she then blackmails Aleksander (now the director of the power plant) into helping her destroy Ulrich's life.

Hannah shouldn't need too much help destroying Ulrich's life, though, since the father of Martha, Magnus, and Mikkel is in a pretty precarious situation at the end of Season 1. In 2019, his son Mikkel's disappearance brings up painful memories of Ulrich's brother, Mads, who also disappeared under similar circumstances in 1986. Shortly after Mikkel vanishes, a young boy's body is discovered in the woods; although the body turns out not to be Mikkel's, it cannot be identified. Over the course of his investigation, Ulrich comes to realize that the body belongs to none other than the long-missing Mads.

After finding notes from Egon Tiedemann, who was police chief in 1986, Ulrich becomes convinced that Helge Doppler was involved in his brother's death as well as the disappearances of Erik, Mikkel, and Yasin — a friend of young Elisabeth Doppler and the third boy to vanish from 2019, who was last seen being approached by a mysterious priest known only as Noah.

Ulrich follows Helge and passes through the wormhole, emerging in 1953, where the bodies of two unidentified young boys — really Erik and Yasin from 2019 — have just been discovered in the construction site of what will become the nuclear power plant. Ulrich becomes convinced that he can stop the murders from ever happening if he kills young Helge in 1953, so he bludgeons the 9-year-old with a rock. However, Helge survives the attack, disfigured and brain damaged. Ulrich didn't change anything, he simply created the susceptible young man who would be manipulated by Noah into becoming his accomplice in 1986.

Covered in blood, Ulrich is arrested by young Egon Tiedemann for the murders of Erik and Yasin. His photo is later discovered in a 1953 news clipping by his colleague, Winden Police Chief Charlotte Doppler, in 2019.

As a young girl growing up in Winden in 1986, Charlotte was obsessed with the mystery of flocks of birds who were all found dead with their eardrums burst. In 2019, Charlotte, now police chief, is once again intrigued by this phenomenon, which has cropped up again in both birds and sheep in connection to Mikkel's disappearance. Charlotte has a strained relationship with her husband, Peter, who she remains married to despite knowing he had an affair with a transgender prostitute named Benni. Together, they have two children: Franziska (dating Magnus Nielsen) and her younger sister, Elisabeth (friend of the missing Yasin), who is deaf.

Charlotte's grandfather was clockmaker/author H.G. Tannhaus, who wrote the book A Journey Through Time and built the device in 1953 that the Stranger (Future Jonas) would use in 1986 to close (but really create) the wormhole, after being delivered the blueprints for the device from a time-traveling Claudia Tiedemann, visiting from the post-apocalyptic future of 2052. In 2019, Charlotte finally comes to believe her grandfather's theories about time travel after spotting the picture of her colleague Ulrich in a 1953 newspaper article.

At the same time, Charlotte grows concerned over Peter's activities on the night Mikkel went missing. At first, she assumes he returned to Benni, but then she becomes suspicious that he was involved in Mikkel's disappearance. In fact, Peter did drive to meet Benni but didn't go through with it, and instead sought solitude in the bunker under the Dopplers' forest cabin — which is directly above the wormhole. As he was praying, he witnessed a portal open right in front of him, and the body of Mads Nielsen dropped out from 1986.

Finding the boy's ID and realizing who he was, Peter called Mads' (and Ulrich's) father, Tronte Nielsen. As they were deciding what to do, the time-traveling Claudia arrived and instructed them to deposit the body in the woods, where it was later discovered.

Meanwhile, Peter's father Helge is living in a nursing home and often rambling about disappearing children, though he seems to have no clear knowledge of his own involvement. Eventually, he remembers his role as the accomplice of the mysterious Noah, who instructed him to kidnap young boys to experiment on in his efforts to build a time machine that harnessed the power of Winden's wormhole. Noah's goal was to use time travel to rearrange human history in order to end all suffering; despite his brutal methods, he saw himself on the side of good, and considered his enemy, the time-traveling Claudia Tiedemann, as being on the side of evil.

Remembering his role in the boys' deaths, Helge travels through the wormhole back to 1986, where he (like Ulrich) tries to kill his younger self to stop the events from ever happening, by ramming younger Helge's car. Unfortunately, he (like Ulrich) fails — younger Helge survives the accident while the elderly Helge dies.

Before she became a time-traveling warrior, young Claudia Tiedemann in 1953 was the daughter of police officer Egon Tiedemann and the tutor of young Helge, the son of the nuclear power plant's founder, Bernd Doppler. Eventually, she would grow up to take over the plant from Bernd as director in 1986. Upon learning that an accident led to the storage of nuclear waste in barrels deep in the caves of Winden, Claudia had the barrels sealed behind a welded-shut door.

While in the caves, she was reunited with her dog Gretchen, who went missing in 1953. She became obsessed with Tannhaus' A Journey Through Time, a copy of which was gifted to her by Bernd's son Helge on her first day on the job. Some time after that, she left Winden never to be seen again… only to resurface as an elderly version of herself from 2052, helping Peter and Tronte with Mads' body in 2019, opposing Noah in 1986, and giving Tannhaus the blueprints for the device in 1953.

Claudia's daughter Regina (possibly the result of an affair with Tronte Nielsen) grew up to be the owner of the only hotel in Winden, while Regina's husband, Aleksander (really a man named Boris Niewald living under an assumed identity), took over Claudia's job as plant director. They met in 1986 when young Ulrich and Katharina attacked Regina, after having been (falsely) told by Hannah that Regina was the one who accused Ulrich of rape. Aleksander saved her life, and Regina and Katharina have been lifelong enemies ever since.

When Ulrich comes poking around the plant in 2019, investigating Mikkel's disappearance, Aleksander has employee Jürgen Obendorf (the father of the missing Erik) collect the barrels of toxic waste and drive them out of town, lest they're discovered. While the barrels are on Jürgen's truck, the Stranger (Future Jonas) is able to get the radioactive material he needs to operate Tannhaus' device.

Later, Aleksander is drawn into the plot of Hannah, his massage therapist, to destroy Ulrich's life. Hannah has kept a bag containing Aleksander's real passport and a gun ever since she saw him burying it in the woods upon his arrival in Winden back in 1986.

Aleksander and Regina's only child is Bartosz, who both protected his best friend Jonas by telling their classmates he was on an exchange program in France when he was really in a psychiatric institution, and also betrayed him by starting to date Jonas' ex Martha while he was away. Eventually, Noah lures Bartosz to him by pretending to be Erik's drug supplier and begins grooming the boy (the grandson of his nemesis, Claudia) to become his new accomplice after Helge's death.

Does your brain hurt yet? If not, it certainly will on June 21, 2019, which is a significant date both on the show and in the real world. It's the day that Michael Kahnwald died, kickstarting the events of the series — and it's also the day that Dark returns for Season 2 on Netflix. Surely such a coincidence can only be proof of a master plan being enacted by a nefarious time-traveler…