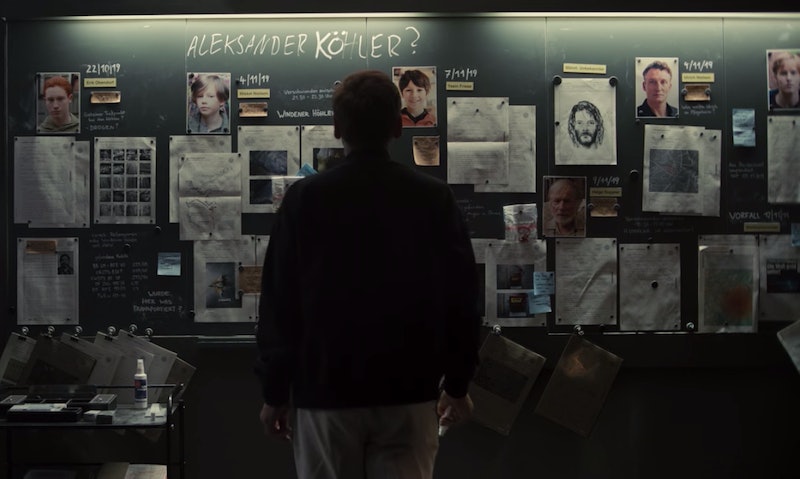 Spoilers ahead for Dark Season 2. Dark Season 2 takes Winden's already tangled relationships and complicates them tenfold. For example, not only did Hannah Kahnwald (Maja Schöne) sleep with Katharina Nielsen's husband and son, but Charlotte Doppler discovers that her mother is also her daughter. And since that’s only the half of it, you probably need a Dark Season 2 timeline explainer to keep everything straight.

It's noteworthy that most of the characters are played by different actors in each timeline, which helps tell them apart and also reinforces the idea that although they're technically the same person, they're in wildly different places and don't always understand the motivations of their future selves. As Adam tells Jonas in Episode 5, "A person lives three lives. The first ends with the loss of naïveté, the second with the loss of innocence, and the third with the loss of life itself. It is inevitable that we go through all three stages. You will turn into your older self, and your older self into what you see before you."

If you're still confused, though, you're not alone: there are several characters who are forced to map everything out to keep track of everyone, including Adam, Jonas, and inspector Clausen. Here's our best version of that.

Dark Season 1 kicked off on November 4, 2019, which could be considered the main timeline — at least initially. The first season follows a young Jonas (Louis Hofmann) still grieving his father, Michael, who died by suicide back in June. After high schooler Erik Obendorf goes missing, young Mikkel Nielsen (Daan Lennard Liebrenz) also disappears while he and some other children are exploring the caves.

As a result, his father, Ulrich, and coworker Charlotte Doppler (Karoline Eichhorn) begin investigating what happened to the kids, and more people begin stumbling on the wormhole beneath the town's nuclear power plant. At the end of Season 1, Jonas learns that Mikkel is actually his father, Michael, and consequently breaks up with Martha, who is his aunt.

About one year after the events of Season 1, we see an older Jonas (Andreas Pietschmann) in the main timeline. His mother, Hannah, initially freaks out about this stranger in her house, but he's able to convince her that he's her son. It's then revealed that there is to be an apocalypse on June 27, 2020, which ultimately happens in the final moments of Season 2.

We also learn how this happens. Aleksander Tiedemann had buried dozens of barrels of nuclear waste below the nuclear power plant, but decided to dig them up before the plant closed. By opening the barrels, the god particle is created, which causes the nuclear explosion. At the end of Season 2, Adam shoots and kills Martha, but we also see a second Martha, who's from another dimension.

There is an explosion at the nuclear power plant in the summer of 1986. A young Mikkel finds himself in the past and is taken to the hospital, where nurse Ines Kahnwald adopts him. Around this same time, a much older Ulrich escapes from the mental facility where he's been kept. He finds his son at Ines' house, and they almost make it to the cave before Egon Tiedemann (Claudia's father) recaptures Ulrich and delivers Mikkel back to his new mother.

Concurrently, Claudia is the first woman to be in charge of the nuclear plant. In a meeting with the former plant director, Bernd Doppler, she learns that they've discovered the god particle — or "the particle that gives all things its mass," as Doppler explains. Claudia is elated by their findings, but the man tells her to leave him out of it — his legacy is the power plant.

Later, Claudia meets her older self, who tells her that a time machine is buried in her yard. The gray-haired woman then goes to clockmaker H.G. Tannhaus (Charlotte's grandfather), giving him the blueprints for the time machine he will eventually make. Younger Claudia has an argument with her father, Egon, who she discovers has cancer. She accidentally kills her father by shoving him, which she'd read about in the newspaper after traveling to 2020.

This timeline mostly follows Peter Doppler's father’s, Helge, as a peculiar young boy. He goes missing one day after Ulrich time travels back to the '50s, where he comes to the conclusion that if he kills the young Helge, the other children won't go missing. The policeman attempts to kill the boy by hitting him over the head with a large rock. However, Helge survives and is kidnapped by Noah, where he's strapped into a chair. His sizable head wound turns into a scar, which he will carry for the rest of his life. Egon Tiedemann arrests Ulrich, and he's confined to a mental facility for the next 30 years.

Egon's wife begins having sex with the mysterious woman who's been living with them, Agnes Nielsen, who we later learn is Noah's sister. Agnes tricks an older Claudia into handing over the final pages of her notebook, and then betrays her by giving the pages to her brother. Noah shoots and kills Claudia, who has already accepted her fate.

Season 2, Episode 4 finds a thoroughly confused Jonas back in the '20s, where he meets a young, blonde Noah. He learns that there's someone named Adam and is taken to a lavish, underground room beneath the caves. There, the show's most shocking twist is revealed: Adam is future Jonas, and he is essentially destined to fight against himself until he becomes the future villain.

We also learn the Latin phrase Sic Mundus Creatus Est, which means "Thus the World Was Created." This is the motto of the travelers, of which Noah, Adam, and others are a part. Adam explains that this group is essentially the opposite of religion. "We've declared war on time," he tells his younger self. "Declared war on God. We're creating a new world, without time, without God." Adam goes on to say that God is time, and that their goal is to create a world without either of those concepts.

Finally, we discover Magnus Nielsen and Franziska Doppler will become travelers, since as IndieWire pointed out, they are with Adam in 1921.

At the tail end of Season 1, we saw that Jonas had time-traveled into the faraway future. Once there, he finds that he's still in Winden, but his surroundings look wildly different, which we later learn is because of the 2020 apocalypse. The surviving townspeople (of which there are few) have been organized into a militia, headed up by Charlotte's daughter, Elisabeth.

After Jonas sneaks into the power plant, Elisabeth hangs him, but ultimately shoots him down out of mercy. He receives a nasty scar across his throat, which is how he's able to identify Adam as himself. Here, we also learn that Elisabeth is both Charlotte's daughter and mother — made possible because she was born to Elisabeth and Noah in the future, then taken back in time.

Hopefully this helps clarify things rather than make them even more complicated. Thankfully, Dark will have a third and final season, so any lingering questions should be answered there.