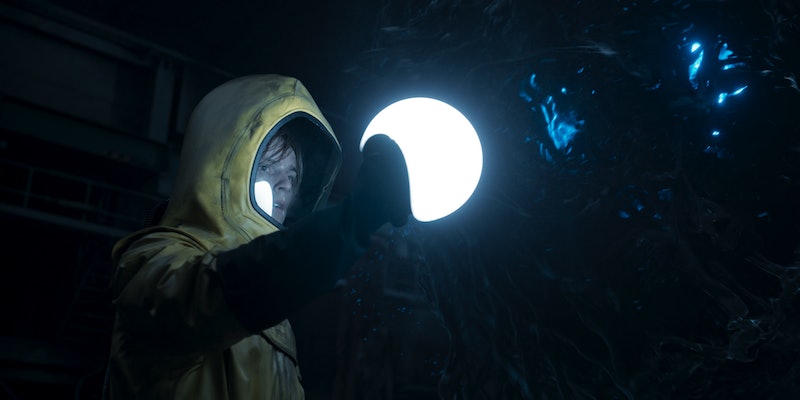 Get out your red string and your tin foil hat, because TV's most convoluted drama is back for more time-travel exploits. Watching Dark can often feel like trying to take apart one of those impossible puzzle boxes, and recapping Netflix's Dark can often feel like trying to put one back together again: you remember how the finished product is supposed to look, but it can be hard to get the pieces to fit back together again. In that vein, perhaps it's best to look back on Dark as the sum of its parts rather than as a convoluted whole. But before we move on to a Dark Season 2 recap, a quick refresher on Season 1...

The series kicks off with the disappearance of several young boys in the small town of Winden, Germany. It turns out that most of these boys were kidnapped and experimented on in efforts to create a time machine. One of the missing boys from 2019, Mikkel Nielsen, traveled back in time to 1986, where he would grow up to become the father of our protagonist, Jonas Kahnwald — making Jonas the nephew of his crush, Martha Nielsen, Mikkel's sister. And that's just the beginning of the tangled knot that is Winden's family tree.

All of these time travel loops and paradoxes are being overseen by warring factions: Sic Mundus, represented by the nefarious priest Noah, who finds his efforts opposed and stymied by the grey-haired Claudia Tiedemann. At the end of Season 1, Jonas meets his older self, who triggers a device that closes the wormhole in the cave connecting 1953, 1986, and 2019… and also catapults his younger self into the post-apocalyptic future of 2052.

Perhaps we can unravel this tangled knot by plucking at its individual strands. In that vein, instead of trying to recap Season 2 in chronological order as presented on the show, let's take a look at each character's journey through time — starting with our three main time-travelers.

In 2053, six months after the end of Season 1, young Jonas is in a Winden destroyed by a nuclear holocaust 33 years ago, desperate to get back to 2020 to prevent the apocalypse from happening. A grown up Elisabeth Doppler (daughter of Charlotte and Peter, sister of Franziska) is guarding the power plant, but Jonas sneaks inside with the help of Elisabeth's translator. There, he activates the god particle inside and steps through the portal.

In 1921, Jonas discovers he has overshot the mark by 99 years and is now stuck in the distant past. There, he's taken in by the mother of Noah and his sister Agnes. He's taken by young Noah to meet Adam, the leader of Sic Mundus… who reveals himself to be Jonas from the future. Adam reveals that he's built a portal that breaks the 33-year cycle, allowing Jonas to travel back to the night his father took his own life in order to break the cycle and avert the apocalypse… and erase himself from existence in the process.

In 2019, Jonas arrives on the eve of Michael's death, but quickly realizes he wasn't sent there to prevent his father's death, but rather to make sure it happens. Adam didn't want him to break the cycle, but to perpetuate it. Michael takes his own life and, later, Jonas leads Mikkel (who would become Michael) through the portal in the caves so the young boy can grow up to become his father.

In 2020, after several months of tutelage under the wing of time-travelling expert Claudia Tiedemann (during which he reactivated the portal in the caves), young Jonas reappears on the brink of the apocalypse to save Martha. Unfortunately, Adam also arrives and shoots Martha in front of his younger self. Just before the nuclear disaster hits, Jonas is confronted by a different Martha from a different world, who whisks him off just as Winden is destroyed.

Also in 2020, adult Jonas is handed a letter by young Noah, ostensibly written by Martha. Following its instructions, he saves Martha's brother Magnus, Magnus' girlfriend Franziska Doppler, and their classmate Bartosz Tiedemann from the apocalypse, transporting them to an unknown time.

In 1987, adult Claudia comes face-to-face with the older version of herself, who stops by for a surprise visit at the nuclear power plant and reveals the truth about time travel. Later, Claudia digs up a time machine in her own backyard, where old Claudia had buried it 33 years earlier.

In 2020, adult Claudia has used the time machine given to her by her older self, and goes to the library to do some research. She uncovers a couple of shocking facts: the date of her father Egon's death in 1987, and the fact that she herself apparently disappeared shortly afterwards. Before traveling back to her own time, Claudia stops by her own house and is stricken to see her grown daughter, Regina, dying from cancer.

Back in 1987, Claudia tries to save her father from his impending death by inviting him to move in with her. When he realizes the truth about time travel, and that she's been hiding it, they get into an argument. In the ensuing scuffle, Egon falls and hits his head. As Claudia lets him bleed out, now knowing she has to let it happen, Egon tells her she's become "the White Devil." Soon after, young Jonas collects adult Claudia from 1987 where they reactivate the wormhole in the caves together before traveling forward again to 2020.

Back in 2020, Claudia retrieves Regina to save her from the impending apocalypse, and takes her to the Dopplers' bunker, where they ride out the nuclear catastrophe along with Peter, Elisabeth, and young Noah.

Meanwhile, old Claudia — known as the White Devil — flits through time, pursuing her mysterious agenda. In addition to visiting her younger self in 1987, she also visits her young father Egon in 1954 to cryptically apologize, and young Jonas in 2019, where she convinces him that he needs to allow his father to take his own life and make sure young Mikkel makes it through the cave to 1986.

In 1954, old Claudia meets with Agnes, who has left Sic Mundus and is estranged from her brother Noah. Claudia gives Agnes a newspaper article revealing Claudia's imminent death. Agnes then apparently betrays Claudia, telling her brother that Claudia holds the missing pages to the book Noah needs to complete his plan. Noah confronts the White Devil and shoots her, taking the pages — the contents of which seem to surprise and upset him.

In 1921, young Noah is digging the tunnel that, in 33 years, will contain the wormhole connecting 1954, 1987, and 2020. His older, unnamed companion (who bears a striking resemblance to Bartosz) expresses a loss of faith in Sic Mundus' mission; in response, Noah murders him. Later, young Noah meets young Jonas after Jonas travels back from 2053, and takes him to see Adam.

In 2020, young Noah passes a letter from Martha to adult Jonas before joining Claudia, Regina, Peter, and Elisabeth in the bunker to ride out the apocalypse.

In 1986, it's revealed that young Helge Doppler was adult Noah's first successful time travel guinea pig after the deaths of Mads Nielsen, Erik Obendorf, and Yasin Friese. Helge was stranded in the '80s due to the same incident that catapulted young Jonas to 2052, which resulted in the closing of the wormhole in the caves. Having finally perfected the machine, Noah is able to send young Helge back to 1953, where he shows up at home alive but scarred.

In 2020, Noah confronts Charlotte while she's cleaning out the workshop of her adoptive guardian, H.G. Tannhaus, the man who wrote A Journey Through Time and built the time machine — after having been given finished versions of both by time-travelers as a young man. Noah reveals to Charlotte that he is her father, although he doesn't reveal the identity of her mother.

In 1954, after killing Claudia, adult Noah lies to Adam about having found the missing pages. In the finale, he confronts Adam about their contents: Adam had promised to help save Noah's family from the apocalypse, but the contents of the missing pages helped Noah realize that Adam actually wants to make sure the apocalypse happens, not prevent it. It's revealed that the woman Noah conceived Charlotte with was… Charlotte's own daughter, Elisabeth. Noah tries to shoot Adam, but the gun jams. Noah's sister Agnes takes the gun and kills her brother instead.

Here's where everyone else left off at the end of Season 2:

Hannah Kahnwald, after being shown the truth of time travel by adult Jonas, steals his time machine to travel to 1954 and visit her former lover, Ulrich Nielsen, in prison. After he fails to convince her he'd leave his family for her, she decides to leave him in prison rather than help him escape. She also decides to stay in 1954 for good, making eyes at Egon Tiedemann and using the alias of her nemesis, Katharina Nielsen.

After Mikkel Nielsen/Michael Kahnwald nearly escapes back to 2020 with Ulrich, Ines Kahnwald starts drugging her adopted son to keep him sedated and away from the prying eyes of an increasingly curious Egon.

Katharina Nielsen, although slow to accept the truth, finally realizes that her husband Ulrich is stuck in 1954 and her son Mikkel is stuck in 1987. Desperate to save either or both of them, she journeys into the caves to search for the wormhole, which is where she is when the apocalypse hits. Did she make it through? If so, to which timeline?

Martha Nielsen is murdered by Adam in front of his younger self (Jonas) moments before the apocalypse — although another Martha shows up soon afterwards, claiming to have come not from a different time, but a different world. Meanwhile, her brother Magnus is being saved from armageddon by adult Jonas, along with Franziska and Bartosz.

Regina Tiedemann is saved from the apocalypse by a younger version of her mother Claudia, who travels through time to make sure her daughter gets into the bunker.

Bartosz Tiedemann has his time machine stolen by his classmates when they discover him using it in the caves. To convince them of its authenticity, he transports them all briefly to 1987. After returning to the present, he's saved from the apocalypse by adult Jonas, alongside Magnus and Franziska.

Peter Doppler and his daughter Elisabeth ride out the apocalypse inside the bunker alongside Regina and Claudia Tiedemann… and also alongside young Noah, who Elisabeth will eventually conceive her own mother, Charlotte, with. Meanwhile, Franziska is saved from the apocalypse by adult Jonas, alongside Magnus and Bartosz.

Charlotte Doppler finds herself at the epicenter of the apocalypse, as Inspector Clausen triggers the nuclear holocaust by opening the barrels of radioactive waste. They turn into a portal, which allows her to glimpse adult Elisabeth in 2053, before the dark matter explodes and obliterates Winden. Was Charlotte able to make it through the portal in order to survive the catastrophe?

Will Jonas — or anyone — be able to unravel the hopeless knot that is Winden and save the world(s) from destruction? How will this tangled tale end? Find out when Dark Season 3 premieres on Netflix on Saturday, June 27.