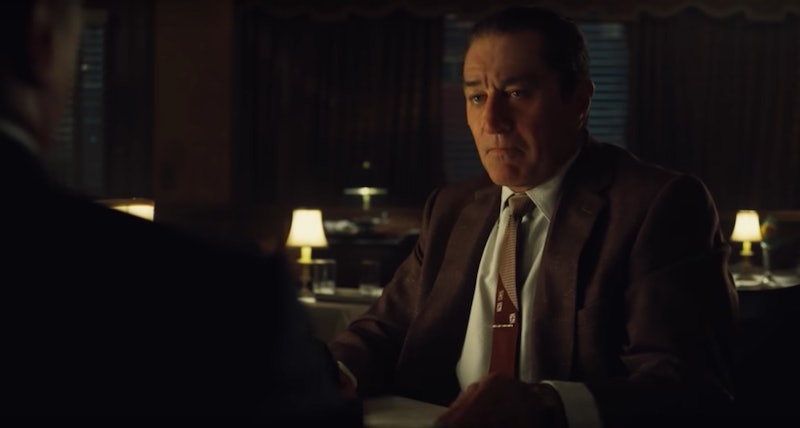 In 2019, the fact that an actor has aged out of a movie or TV role is no longer a solid argument against casting them. Martin Scorsese's The Irishman reunites the filmmaker with some of his frequent collaborators and turns back the clock on them as necessary. While movie lovers, creators, and critics are still hashing out the pros and cons of the technology, this epic makes a good case for its existence, according to early reviews. Robert De Niro, Joe Pesci, and Al Pacino are all de-aged in The Irishman (which comes out in theaters Nov. 1 and on Netflix Nov. 27), and the film may mark a huge milestone for the digital process.

Based on the book I Heard You Paint Houses by Charles Brandt, the film spans five decades in the life of Frank Sheeran (De Niro), who was involved with mob boss Russell Bufalino (Pesci) and claimed to have been responsible for the infamous and unsolved murder of labor union leader Jimmy Hoffa (Pacino). All three actors are in their 70s and were digitally altered for scenes that feature their characters in their 40s and 50s. These effects don't come cheap and reportedly helped push The Irishman's budget to almost $160 million.

To Scorsese it was worth it, to work with the actors that he wanted in the roles. "The reason why we did the CGI is kind of complicated, because at a certain point, if I made the film earlier [the cast] could have played younger, and then at a certain point we missed that," Scorsese explained during a press conference at the London Film Festival, via Hey U Guys. "And then [other people] said 'Use younger actors to play them younger.' And then I said, 'Well, what's the point of that?'"

Scorsese opted to work with a team from Industrial Light & Magic (ILM), led by visual effects supervisor Pablo Herman, in order to work with the same great talents across the film's long timeline. The filmmaker has compared digital de-aging to makeup — an illusion that helps the audience suspend their disbelief. And though some critics say that de-aging is a distraction, Scorsese believes that a great performance can still shine through. "If you look at an older film, there was an acceptance by the audience where the hair is powdered, or you know that that’s makeup and that the mustache is fake. But you went with the illusion," he told Sight & Sound Magazine. "[De-aging is] another level of that, I think.

De Niro has echoed Scorsese's sentiments, while also expressing some skepticism over this new technology. He said at the film's London Film Festival panel, per Screen Rant, that technology can only go so far in films that deal in realism. "If it does to such a point it becomes something that is not what a person is, what a human is," the actor said, "It can be another type of entertainment, like comic strip things, Marvel. The comic book character-type things, cartoony stuff."

To be de-aged for this film, De Niro and his costars shot scenes with small tracking dots painted on their faces that were captured by special cameras. Effects studios like ILM have compositing systems, which combine digital assets with live-action footage. This is also where VFX artists edit out the tracking dots, making for a streamlined combination of the real and the digital.

The Irishman editor Thelma Schoonmaker told Yahoo Movies UK that the new technology presented "a big risk," but that "the characters are so strong, it doesn’t matter." Speaking to Sight & Sound, Scorsese said that the added layer of the effects made him pay even closer attention to his actors' facial expressions to keep things as organix as possible. "As the actor moves in the frame, the light changes," he explained. "So a few frames this way – you’ve got to put some texture here… and so you’re really creating, recreating, the performance, in a way, with the basic truthful elements of the actor, and protecting those."

The Oscar buzz for The Irishman is already deafening after a few festival screenings. So it seems that, in this case at least, de-aging enhanced more than it took away.