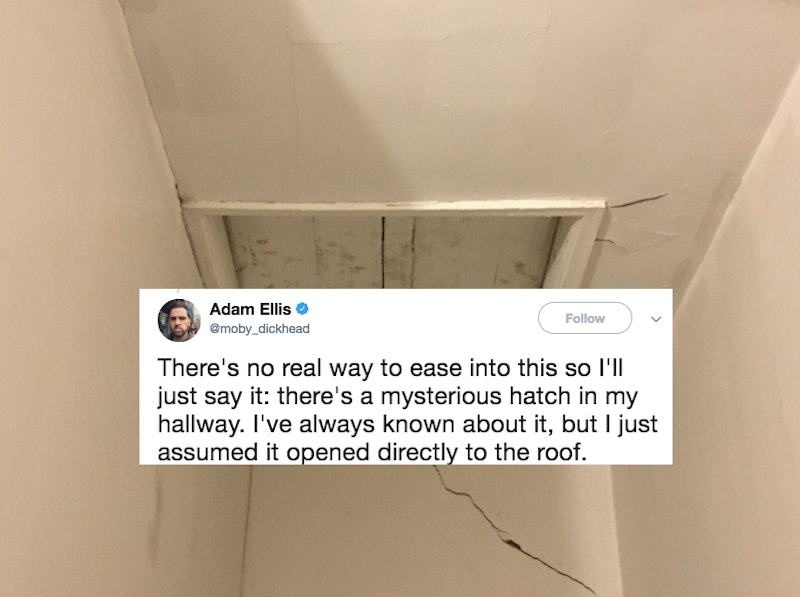 Hello. Hi. How are you this lovely Monday morning? Are you worried about an alleged child ghost haunting your apartment who may or may not be intent on utterly destroying you? No? Well, then you’ve got something over Adam Ellis, writer of the “Dear David” ghost story that’s been playing out on Twitter for the past few months. The plot has thickened yet again, too: In the latest Dear David update, Ellis found a hatch in the ceiling of the hallway of his building.... which he thinks might lead to a crawlspace directly over his apartment.

All aboard the Nope train to Nopesville!

This update unfolded the evening of Friday, Nov. 17. “For everyone asking — yes, I'm alive,” Ellis began the thread. “I've been on the quiet side because there's something I'm trying to investigate and I'm not sure how to yet. I'd rather not tweet unless I have something substantial to share.”I’m honestly not sure why he seems to have not considered this development “something substantial,” though, because… well, you’ll see. It all has to do with how Ellis’ apartment building is constructed, and a recent realization he had that might be a game-changer.

You’ll recall that he had previously mentioned he lives in a duplex; the building was once a house, but had been converted into two apartments. He used to live on the one on the ground floor, but now he lives on the second floor. The building looks like this:

Or so he thought. There’s also, you see, a hatch in the ceiling right outside his apartment. He’s always known it’s there, he said, but he’s never really given it much thought before — until recently. It’s worth noting that the hatch is a really long way away from the stairs, so you’d probably need a ladder or something to get into it:

The existence of the hatch wouldn’t necessarily be that notable… except for the fact that Ellis realized that the hatch probably doesn’t open onto the roof, like he originally thought. That’s because the dimensions of the whole thing look like this:

Which means that his building doesn’t actually look like that first plan he posted; rather, it looks like this:

The reason that all of that matters is this: Ellis has started hearing… noises coming from above him while he’s been at home. “The other week, I was tweeting the most recent update from the living room couch,” he wrote. (For those keeping track, this update was the one with those terrifying pictures.) “About 30 seconds after I'd sent the last tweet, I heard a thump directly above my head, as if someone above me had dropped something on the floor — which is impossible, since I'm in the top apartment.”

Because of the whole hatch situation, this means that whoever dropped the thing on the floor did it from inside the space between the hatch and the roof.

Nor is that the only sound he says he's heard coming up from up there:

He hasn’t fully investigated the hatch yet, but he’s going to; he’s ordered a telescoping pole expressly for that purpose, so he can at least maybe open up the hatch and peek inside from the hallway:

Here, Adam. I made you a meme:

WHY HAVEN’T YOU JUST CALLED YOUR LANDLORD AND ASKED ABOUT THE DANG HATCH. Because even if there isn’t, like, an angry spirit or moldering remains or anything up there, there are plenty of other reasons to be wary of hidden (or not-so-hidden, as the case maybe — looks like this one was just kind of in plain sight) crawlspaces near your place of residence. It’s not unheard of, for example, for people to find other people living in their homes without their knowledge. In 2012, a group of Ohio State University students who were living in a rented house off-campus discovered that a man had been living in a room in the basement that was locked when they moved in; also in 2012, a woman in Rock Hill, SC found her ex-boyfriend living in her attic 12 years after they had broken up; and in 2008, a man in Japan discovered that a woman had been living in a cupboard in his house for an entire year.

I don’t mean to cause a panic or anything; these stories are relatively few and far between, and when they do happen, the squatters aren’t always dangerous (of those three stories I mentioned, the ex-boyfriend hiding in the attic is, I would argue, the only one that's truly frightening in a fear-for-your-safety sort of way). But, y’know… it happens. Is what I’m saying. And it is full of nope.

That said, though… well, you all already know that I think the whole Dear David story is a well-executed hoax, Gentle Readers, so setting aside everything that’s freaky about having a crawlspace in your home, I suspect that Ellis has either known for some time that he wanted to incorporate the hatch in the ceiling into the tale, or that he recently realized that he could do so. I realize that I’m looking at it from a particular point of view that not everyone necessarily has, but… well, consider this:

My background is in theatre. Specifically, I was a director. And as a director, whenever I was working on a new show, I always made it a point to make sure I really knew the space in which the production would be performing. In addition to just, y’know, helping with things like knowing where the bad sightlines are or being able to prepare your actors to deal with the acoustics of the space, I also found it was always worth asking whether the space had any weird quirks that could be exploited: Was there a door in the back wall that can be used an entrance? Could you rearrange the audience seating? Did the theatre allow for easy entrances and exits through the house? It always boiled down to what the space in which I was working had that no other space had, and how I could use it to my advantage.

Although Ellis’ story isn’t a piece of theatre, he is using a particular environment — his apartment, the building in which it's located, his neighborhood, etc. — as his “stage,” so to speak. So, if the story is, in fact, a hoax as I suspect it is, then the hatch might be an example of Ellis using the unique aspects of his "stage" to his advantage.

In any event, though, I still can’t wait to see what’s up there in that hatch — because I’m sure that whatever it is, it will be An Event. It’s anybody’s guess when the next update will come along, although I’m assuming that it’ll be at least a week and a half; I’ve noticed that lately, Ellis has only been updating every 10 to 14 days or so. (Not going to lie: I’m curious if he’s doing that purposefully so as to give each update just enough time to go viral. Then, when interest starts to die down again… well, that’s the best time to launch a new update and get everyone talking about it again, is it not?) Stay tuned, though — there’s definitely going to be plenty more where this is coming from.

More like this
Ashamed Of Your Screen Time Stats? Here's How To Change That
By Alexis Morillo
Learning To Love, Not Judge, The Lunchbox Wives Of TikTok
By Esther Zuckerman
11 Super Bowl Instagram Captions To Use On Game Day — Even If You Don’t Like Sports
By Alexis Morillo
Pret & Costa’s Coffee Is The Strongest On The High Street, According To Which?
By Sam Ramsden
Get Even More From Bustle — Sign Up For The Newsletter
From hair trends to relationship advice, our daily newsletter has everything you need to sound like a person who’s on TikTok, even if you aren’t.