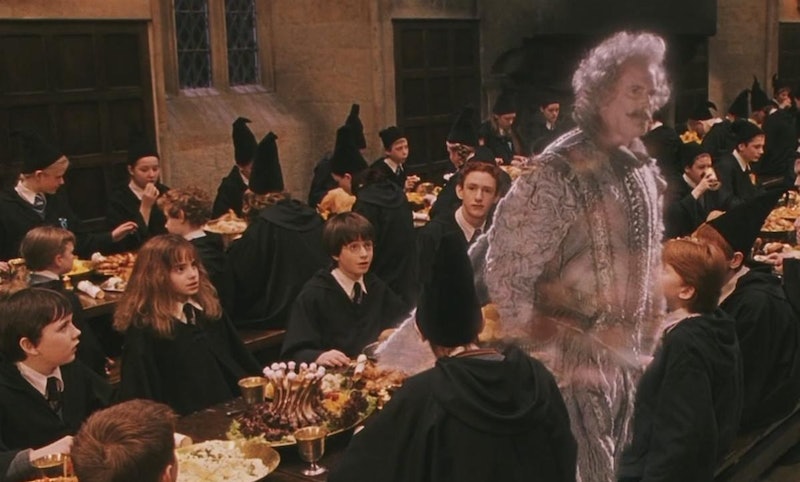 I hope you're sitting down for this one. On Wednesday, a grim Reddit post reminded us that Harry Potter attended a Deathday Party on a very important date. Not only was Oct. 31, 1992 the 500th anniversary of Sir Nicholas de Mimsy Porpington's death, but it was also the 11th anniversary of James and Lily Potter's deaths.

The Harry Potter books don't directly address the shared deathday, but in Harry Potter and the Sorcerer's Stone, Hagrid tells Harry that Voldemort "turned up in the village ... on Halloween ten years ago." So where does Harry get off celebrating someone else's death on the anniversary of his parents' murder?

As Redditor imapiekindaguy points out, "we don't know if Harry really takes in this part of what Hagrid is saying; after all, he'd just had two fairly big shocks in being told he is a wizard and that his parents had been murdered." It's entirely possible that Harry didn't put together the dates until he visited his parents' graves in Harry Potter and the Deathly Hallows. Or perhaps he just didn't read enough.

Harry's stereotypically jockish nature aside, it does seem strange that no one else in the wizarding world would celebrate the day of Voldemort's defeat. I mean, they all went out drinking on Halloween 1981, toasting the Boy Who Lived as he was being left with his muggle relatives. And Minerva McGonagall — not a woman for hyperbole — told Dumbledore that she "wouldn't be surprised if [Oct. 31] was known as Harry Potter Day in the future."

Then again, perhaps the magical community decided, in retrospect, that any observance of the Potters' deathday should be a more somber affair. Although Halloween is not as popular a holiday in the U.K. as it is stateside, it seems strange that witches and wizards wouldn't celebrate a holiday devoted to divination and sweets, or one on which they could dress in their robes and walk unnoticed among muggles. Given the significance of the Potters' sacrifice, it doesn't seem unlikely that witches and wizards in the U.K. decided to give up their Halloween merriment out of respect for the dead.

What do you think? Did Harry know his parents died on Halloween 1981 when he attended Nick's Deathday Party? Why don't magic folk in the U.K. celebrate Halloween? And whatever happened to Harry Potter Day? Let's talk about it on Twitter!