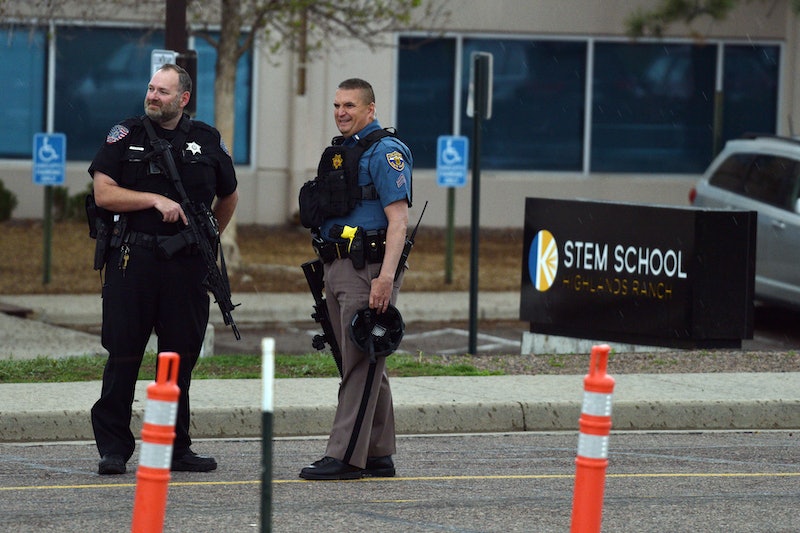 Just miles from Columbine, one 18-year-old male student was killed and eight others were injured in a shooting at STEM School Highlands Ranch on Tuesday afternoon, The Washington Post reported. Officials say the Denver school shooting victim was due to graduate in just three days when he was gunned down, according to the outlet.

On Wednesday, Kendrick Castillo's parents confirmed to ABC News that their son had died in the shooting. Castillo was a hero, his dad told the outlet, saying, "I want people to know about him." In an interview with The Today Show, Castillo's classmate Nui Giasolli said that he had tried to tackle one of the gunmen.

Castillo's death was initially confirmed in a Facebook post by the Douglas County Sheriff's Office. "It is with extreme sadness that we can confirm that 1 student at the STEM School was killed in today’s #stemshooting incident," the post reads. "The immediate family has been notified, but we do not know if the extended family knows yet. The Douglas County Coroner Jill Romann has not officially identified the victim, but is stating it’s an 18-year-old male."

At least one student confronted the shooters, but it's not known who that was. "We’re going to hear about some heroic things inside the school," Sheriff Spurlock said in the Wednesday morning news conference. Some 1,850 students attend the school, which ranges from kindergarten to 12th grade.

CNN reported that eight injured students — the youngest of whom is 15 years old — were taken to area hospitals, and that several of the injured are in critical condition. According to the news channel's count, Littleton Adventist Hospital in Littleton has five patients, Sky Ridge Medical Center in Lone Tree has two, and the Children's Hospital Colorado South Campus in Highlands Ranch had one that was already released.

Colorado Gov. Jared Polis released a statement on Twitter. "I‘m absolutely heartbroken to learn that a STEM school student was killed in the shooting today. I cannot imagine the grief & horror that the family is dealing with. Our deepest condolences go out to the family, the community, & everyone impacted by this senseless act of violence," Polis wrote on Tuesday. Earlier, he had posted that "the heart of all Colorado is with the victims & their families."

CBS 4 Denver reported that the White House also released a statement on the shooting. "Our prayers are with the victims, family members, and all those affected by today’s shooting at STEM School Highlands Ranch in Littleton, Colorado," the statement reads. "Tragically, this community and those surrounding it know all too well these hateful and horrible acts of violence." The statement also thanked law enforcement and first responders "for their heroism."

The shooting comes just days after a gunman at the University of North Carolina in Charlotte killed two and injured four. This year alone, there have been 115 mass shootings, including the STEM school shooting, according to the Gun Violence Archive. They consider a mass shooting to be an incident in which four or more people are shot, though not necessarily killed.

This article was updated on May 8.