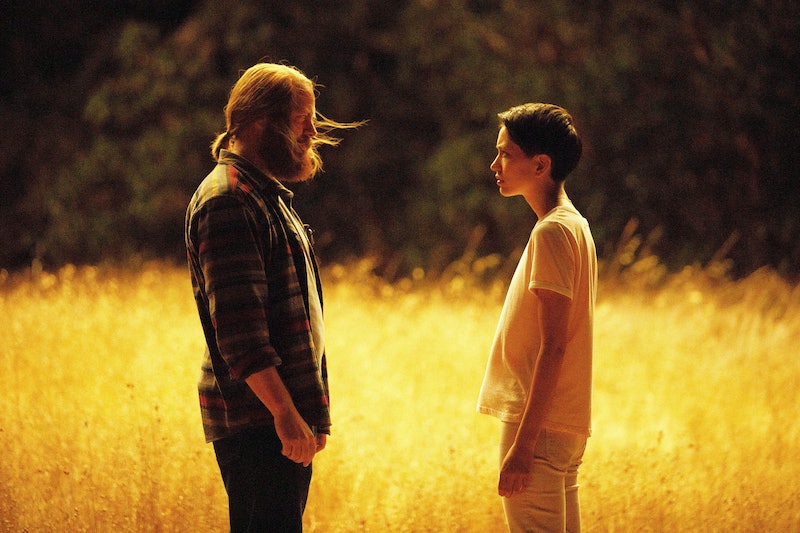 Warning: spoilers ahead for the Season 1 finale of Devs. Throughout the first season of Devs, creator Alex Garland presents a disturbing vision of a cultish tech company in which the preferred mode of communication is hushed explanation and the preferred means of control is violence. The thrilling finale episode features plenty of both as it satisfies the show's parallel concerns: the season-long debate over free will and determinism, and how that intersects with the fate of our heroine Lily.

Despite her insistence that she won't comply with the future Forest's projector has laid out for her, Lily finds herself back at Amaya on the same day she pledges not to leave her apartment. She rides the glass horizontal elevator into the dark heart of Devs, where Forest shows her a projection of what happens next: she shoots him with the gun she already has in her pocket, and they both die in the gold-flecked, airless moat that surrounds the facility.

But then Lily commits what Forest and his tech disciple Katie believe she can't: a defiant act of free will. Rather than shoot her boss, Lily tosses the gun away. Still, it's not enough to alter her fate. Developer Stewart uses an emergency override to instigate the elevator crash that the bullet should have caused, and Forest and Lily fall to nearly identical deaths by asphyxiation. When pressed, he tells Katie he did it because "someone has to stop this. Don't blame me, Katie. It was predetermined."

But was it? What we just observed from Lily is evidence against a static, deterministic interpretation of the universe. Even if Stewart thinks the Devs experiment must stop, was a plan that kills the innocent Lily really the best way forward?

Thanks to the Devs program, though, her life doesn't have to end in death. In fact, Forest argues that as Devs gets more sophisticated, the simulation becomes indistinguishable from real life. So, with his and Lily's dead bodies still lying on the floor, Katie restores an up-to-date version of Forest — one who remembers what just transpired with Lily — into the same projection system the team has been using to explore the past and present. The shocking difference is that rather than passively observing, Katie is able to talk to this simulated Forest. He is able to respond. Now that Lily has upset the notion of a perfect determinism, Forest is finally able to reconcile himself to what Lyndon and Katie have been advocating for episodes: that the only solution to predicting the past or present is to accept that reality is always fracturing and spinning out in new directions. In other words, the only way for Forest to be reunited with any version of his dead wife and daughter is to accept that some versions of Forest can't be. "I want 'em back so much," his projection-self tells Katie. "All right, f*ck it. I guess wish me luck."

A few moments later, Lily wakes up in the same apartment as her boyfriend Sergei. The clock has been rewound to before his death in Episode 1, but her memory of all that happened after hasn't been reset. She remembers dying; she remembers Sergei isn't who he pretends to be. Eventually, she seeks out Forest and finds him playing with his dead family. He tells her they've been "resurrected," which is true if you buy that there's no difference between what's real and what's simulated. It's a convenient worldview for someone who has always longed for something impossible in the physical world, but Lily fights it. "We're in Devs," she tells him, underscoring the distinction between resurrection and rebooting.

It's heaven, Forest tells her, or it can be — so long as they can relax into the knowledge that they're living inside a simulation. In other iterations, Forest knows that their stories will spin out differently, that he cannot always be with his family, and that other iterations of reality will be closer to hell for Lily. He wants their less fortunate avatars to know they are in a simulation, in the hopes that this knowledge will help them endure their own.

The next scene between Katie and the senator we met earlier in the season, however, negates Forest's assertion that reality is indistinguishable from simulation. In her last act of devotion to her boss, Katie wants to make sure no one ever turns the system off. Forest may be calling Devs "deus" now, but it's only a god to those inside it. Outside the system, there are more powerful forces — like power itself. The "resurrection" needs to stay plugged in.

Of course, this is also subject to analogy: is the life we live in the physical world really less vulnerable to forces beyond ourselves than the Devs simulation is to the flick of the off switch? That, too, might just be a fiction that's easier to live inside, not unlike our belief in free will.

More like this
Wait, Is Barney Stinson Related To Sophie On 'HIMYF'?
By Gretchen Smail
Everything To Know About 'Only Murders In The Building' Season 3
By Gretchen Smail and Kadin Burnett
A Teen Murder Victim's Horrific Diary Entry Helped Police Find Her Killer
By Brad Witter
The Song At The End Of 'The Last Of Us' Ep 1 Has A Deeper Meaning
By Sophie McEvoy
Get Even More From Bustle — Sign Up For The Newsletter
From hair trends to relationship advice, our daily newsletter has everything you need to sound like a person who’s on TikTok, even if you aren’t.