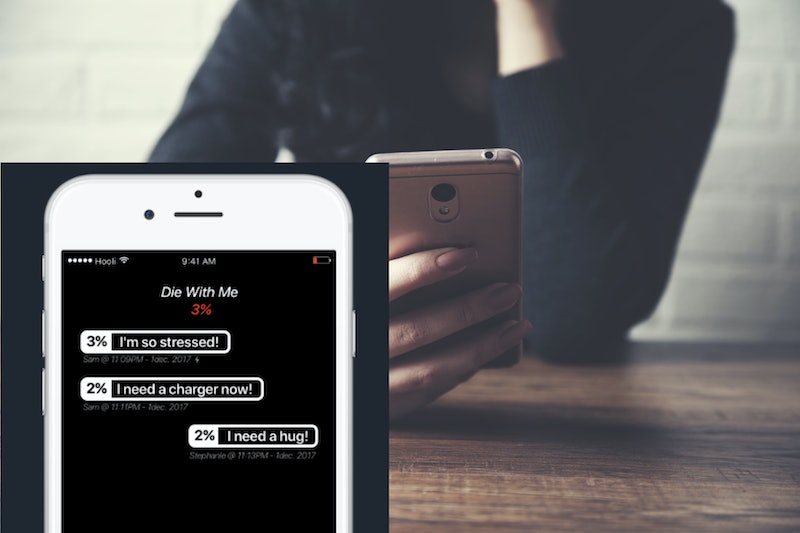 There is no worse feeling on this earth than that of having a phone whose battery life has nearly run out. No Instagram? No texting? What's one to do with their time — communicate with people face to face? One app has the answer. "Die With Me" only works when your phone is about to die and has less than five percent battery, making those last moments with your device more meaningful and allowing you to avoid in-person interaction for a few more minutes.

In a video for the app, the narrator explains that as your phone lives its final moments, it can expire in peace in a chatroom with other humans also in possession of a nearly drained battery. Lament the temporary death of your phone together, and grieve over the fact that you're stuck at work for another two hours and left your charger at home. (What were you thinking?) Connect with likeminded people also wondering how they'll fill the hours until they can once again charge their phone, hours that will be void of Snapchat filters, obsessive Pinterest use, and texting selfies to your work wife sitting three cubicles down.

The video will make your heart shrivel, but you should watch it anyway.

In case you're getting any funny ideas about hopping in this chatroom even with a fully charged phone, know your efforts will prove futile. You can only access the app when your phone has dropped below five percent battery life, and should you plug your device in, you'll be kicked out of the chatroom once your charge is back up above five percent.

The app is available for both iOS and Android and has received many glowing reviews. It does come with a small price tag of $0.99 but honestly, can you really put a price on a few more minutes of mobile device bliss? CAN YOU? No.

While "Die With Me" is understandably very simple in terms of functionality (a battery-sucking app when your phone is taking its final breaths? No thank you), the creators had bigger plans in mind for it. Dries Depoorter, who created the app (along with partner David Surprenant), told Motherboard they intended to make "Die With Me" an app to foster romantic connections: "We had ideas to make a dating app where you can find someone around you with a low battery, and when you meet, the battery [is dead], so you can have a offline real conversation." A brilliant way to guarantee daters stay off their phone. Brilliant!

"We wanted to do something positive with a low battery," Depoorter added. I'd agree the app is probably a better alternative to what most of us want to do when our phones are about to die, which is give it CPR and cry hysterically.

Silly app or hidden social experiment? Possibly both. "Die With Me" highlights our obsession with and dependence on our mobile devices and social media. We will be hooked to our phones until we are literally unable to use them any longer. Kind of fascinating and simultaneously, kind of sad.

"Die With Me" isn't the only one trying to entertain us when hope is nearly lost. Let us not forget Google's dinosaur game, which you can play when you have no internet connection and your life is an empty and meaningless shell. Is our love of technology so intense that we have to use technology even when said technology isn't fully functional?

Download "Die With Me" today so you're never caught off guard with a low battery and lack of entertainment ever again.