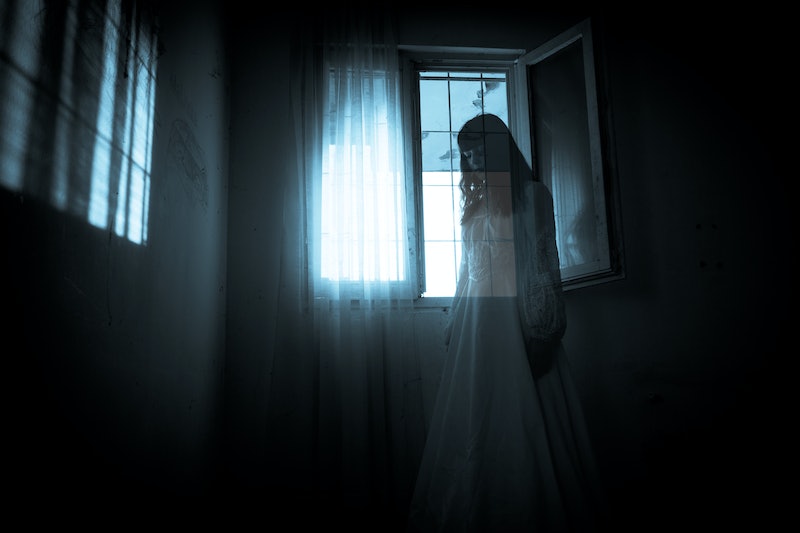 There are a lot of concretely scary things in life, that's for sure — natural disasters, student loans, superbugs, mansplainers... you get the picture. But if you expand your worldview to include the realm of the supernatural, then, well, you've got a whole new batch of creepy stuff to add to your fear repertoire. Life's more exciting when you embrace the unknown, though, so it's really good to know the difference between ghosts, poltergeists, and demons for a number of reasons. Firstly, because, well, it's really freaking fascinating. Secondly, you'll be able to make way more sense of horror movies when you know exactly the type of supernatural entity the characters are dealing with. And thirdly, it could be helpful in case you ever get... haunted by one? OK, sorry, not trying to put that kind of energy into the universe for you or anything, but I'm just saying. Hey, you gotta protect yourself — it's a vast n' wild paranormal world out there.

It's easy to clump all of the most well-known notable supernatural entities together — like "oh, check out that ghost/demon/poltergeist thing." But c'mon, it's almost Halloween, and we can do better than that! These entities are all fully unique from each other, and a haunting from any one of them comes with a whole different (and freaky) bag of tricks. Let's get super clear on these three types of supernatural entities — which ones are maybe chill, which definitely aren't, and what makes each distinct from the others — as you allow me to explain ghosts, poltergeists, and demons, once and for all. Read on.

Ghosts: The old classic when it comes to supernatural entities. Ghosts are known to simply be the spirits of people who have passed away who make themselves seen by the living. They tend to only make themselves known by sighting, but are also said to be able to speak, change the temperature of a room, or bring a certain odor with their presence. "Ghosts are almost exclusively dead humans who passed across to the afterlife due to unresolved issues or a violent death," explained Mystic Investigations on its site. So generally ghosts are troubled souls, yes, but that doesn't exactly make them dangerous or malevolent (although apparently they can be if they were a particularly evil person in life). Often times, they may just be confused, trying to get closure about something that happened in their earthly life, or too disturbed by their own violent end to fully move on into the next realm, causing them to remain partially here and thus, have interactions with living people. Or sometimes, it may just be an extremely determined person who didn't want to die, and isn't quite ready to leave.

In any case, ghosts generally experienced some sort of trauma in their life — whether related to their death or not — and tend to stick to the location where these hard-to-move-past events took place (although they've been known to haunt people and objects on occasion, too). This can explain "haunted houses," where a spirit remains regardless of who is moving into or out of the space. If you suspect you're being haunted by a ghost, you may want to look out for signs. Feeling a sudden, inexplicable cold chill in the room may be an indicator, as can an unexplained foul odor (or even sometimes a pleasant one). Many people who claim to have had ghostly encounters say they've had the sensation that they're being watched, and also heard strange noises or voices in their homes.

Many of us know poltergeists from the classic film series of the same name. The word itself translates to "noisy ghost," which refers to its apparent ability to make noise, throw around objects, and otherwise disrupt our physical environment — and us. They're said to be able to literally bite, pinch, and otherwise attack or harass their human victims, as well as move, throw, and even break objects. And although the word's definition implies that a poltergeist is a specific type of ghost (as do some other sources), many experts believe they're actually completely different entity. "[P]oltergeists have nothing to do with ghosts or spirits at all," explained Psychic Elements on its site. "The best way to describe it is active kinetic energy that causes physical disturbances." This makes sense, as ghosts are generally unable to break through to the physical realm in the extreme ways that make poltergeists unique.

Another key difference is that poltergeists aren't typically visible the way ghosts are, although they have no trouble making their presence known regardless. "Poltergeists are extremely angry and violent non-corporeal entities who have the power to lash out ... and physically interact with our environment," wrote Mystic Investigations. So while seeing a ghost is certainly scary beyond belief, being in a space with a poltergeist, invisible or not, is straight-up dangerous, as they've been known to break objects, injure people, and otherwise wreak havoc in the physical realm.

Unlike ghosts, poltergeists are said to feed directly off of the emotional state of a particular person rather than being linked with a place. "Poltergeists are not angry spirits seeking retribution, but psychic disturbances surrounding an unhappy person, often a teenager," explained Psychic Elements. And as stated by Ghosts And Gravestones, "Some experts explain it as a mass form of energy that a living person is controlling unknowingly." For this reason, poltergeists are known to follow energy or a person, rather than occupying a particular space like a ghost does, and the reason they're known to be linked with teenagers is because of the extra-strong emotions and turmoil that comes with adolescence and puberty. Thanks, hormones.

OK, now we're moving over to the really freaky-deaky stuff, IMO anyway. I was raised Catholic, and even though I don't identify with that belief system anymore at all, the deep-seated fear of of demons and possessions and all that fun/evil stuff is still totally alive within me. That said, demons are defined as "an evil spirit or devil, especially one thought to possess a person or act as a tormentor in hell." So yeah, not ever a good thing. They're widely considered to be insidious and malevolent in nature, and have been referenced in countless types of folklore, religions, and cultures throughout history. In religious terms, they're often considered to be fallen angels, or other "lower gods" who wield some sort of supernatural power. "A demon isn't out for any resolution of an issue but rather pure malicious evil, as it feeds off the emotional energy of fear and anger," explained Mystic Investigations. This sets them apart from ghosts, obviously — and while the danger and potential for physical destruction associated with demons can be compared to that of a poltergeist, it's considered much more severe in demonic cases, and demons have the power to make themselves very much seen in the human realm. "[D]emons can manifest themselves to us, taking on physical form in order to try to coax us to commit evil," wrote ThoughtCo on its site. They're said to be highly persuasive and tempting (think the snake in the myth of Adam and Eve), and prey upon vulnerable, emotionally-troubled people who may be desperate for help, not able to think clearly, or are weak in other ways.

And while demons won't necessarily haunt you the way a ghost will, they can do worse: demonic possession. "A demonic possession occurs when, through continued cooperation with a demon, a person essentially invites the demon in by aligning his will with that of the demon," explained ThoughtCo. This is where a demon's snake-like power of persuasion comes in handy — they essentially have to convince you of allowing them in, hence why they prey upon people with emotional or physical weaknesses who may be desperate or just not strong-willed enough to deny the temptations offered up by the demon. Let's all hope we maintain our wills of steel and that there are no exorcisms necessary in any of our futures. Glad to know the option exists though... I mean, just in case, right?

More like this
The 8 Best Chew Bones For Puppies, According To A Vet
By Andrea Hannah
‘Squid Game’ Creator Hwang Dong-Hyuk Just Dropped A Major Season 2 Tease
By Brian Anthony Hernandez and Bustle Editors
Everything To Know About 'Evil' Season 4
By Meguire Hennes
Your Daily Horoscope For August 16, 2022
By Alexandria Lettman
Get Even More From Bustle — Sign Up For The Newsletter