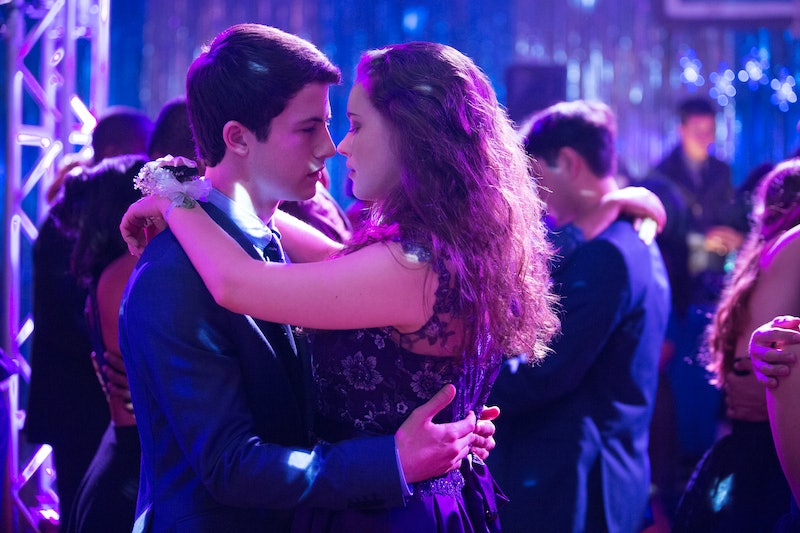 When bringing a book from page to screen, things are going to change — it's inevitable. But that doesn't mean fans of a book should write off its adaptation, especially when the author is involved. In fact, the differences between Netflix's 13 Reasons Why and the book it's based on expand the story beyond the scope of the novel, and author Jay Asher was completely fine with these changes. "Fans of the book are really going to love this series because you do get to know some of the other characters more and some of their backstories," Asher tells Bustle. "The reasons are all the same, but you get more insight into each of the reasons."

The Netflix series, which premieres on March 31, dedicates an entire episode to each of Hannah's reasons for ending her life, as protagonist Clay listens to the explanatory tapes she left behind. And though much of the series does come from Clay's perspective, there are multiple scenes that don't feature him or Hannah, letting viewers into the lives of characters like Justin, Jessica, Alex, Mr. Porter, and more. But the character who Asher was most excited to see come to life in a bigger way was Tony, played by Christian Navarro in 13 Reasons Why.

"It was Tony’s character, the person who has the second set of tapes. In the book, [he] has a much smaller role, but was a character that I absolutely loved— I wasn’t sure what I loved about that character, but I did," Asher explains. "So when I realized one of the things they were going to do with the adaptation was to have him be a much larger presence, I was really happy about that."

But that doesn't mean Asher wasn't happy with the other ways that showrunner Brian Yorkey and everyone else behind 13 Reasons Why expanded the story. As a consulting producer, Asher helped the writers adapt the novel, and when he wasn't directly involved, trusted those who were — starting with producer Selena Gomez and her mother, Mandy Teefey, who first approached him about adapting the novel eight years ago.

"I completely felt that they understood the story in the way that I intended it to be understood, and so that was a good place to start," Asher says. Eventually, the adaptation went from film to TV series, and he remained a part of the process.

"They wanted me to be involved in bringing in other people who shared our perspective, which was funny, because my field agent at the time said, 'Everybody in Hollywood says they want you to be involved, but then at some point you get pushed aside.' But I felt I trusted them and that they were true to their word, so together we interviewed other producers and brought on people we agreed with, or [who] agreed with us."

Once the team was assembled, Asher spent time with the series' writers, answering any questions they had about the book. Together, they even brought readers into the discussion, asking fans at the author's speaking events about "what they most got out of the book." Those discussions eventually turned into scripts, and though the writers sent one to Asher, he soon asked them not to.

"I gave notes on it, but it was weird because it was very obvious that they completely understood it," he says. "You’re always gonna have something to point out as a writer ... but I said, it’s all such minor stuff I’m pointing out, and then I asked them not to send me any more scripts because I didn’t want to hamper their creativity." Occasionally, they'd "pick his brain" on certain things, but other than that, Asher let the writers take his source material where they wanted.

"I already understood what they were trying to do and I knew we all shared a same passion for the story, so I didn’t want them to be afraid of all of the little, tiny things I was going to say," he says. "There was so much trust involved from the beginning."

What really mattered to Asher was that "the tone and the seriousness and the message" of 13 Reasons Why remained the same, and though fans will notice many changes on the TV series, it certainly succeeds in that regard. One of the most noticeable changes is the timeline, as the book takes place over the course of one night, while the series spans several weeks. All of that extra time, however, allows for deeper exploration of the characters and new subplots that further the message, such as Hannah's parents suing her school for not stopping the bullying, and Clay confronting the people on the tapes about how they treated her.

"Anytime [the writers] had to change something, it was just obvious really early on that they weren’t going to change it in a way that would change the message, or that would’ve brought a completely different tone," Asher says.

Fans of the book can get some insight to how those decisions were made in the new TV tie-in edition of the book. It is already available and includes photos from the series, as well as interviews with Asher and Yorkey, director Tom McCarthy, and multiple cast members.

Another major difference between the book and series is the latter's increased focus on the main characters' parents. In addition to Hannah's parents and their lawsuit, viewers spend time with Clay's parents, Alex's dad, Justin's mom, and more. But even if that leads to a mixed audience of teens and parents, Asher thinks the story's core message remains the same.

"A lot of what I wanted to say with the book, when you’re really focused just on the teens, is the idea that we don’t know what goes on in anybody’s lives and that everybody has things they’re dealing with," he says. "We’re never going to know exactly what those things are, we can never be in complete control of another person, whether it’s somebody who’s hurting. At some point, it is up to them to make sure that they open up, but we just have to make sure they know we’re safe to open up to. I think you see a lot of the characters, the adults and the teens ... wrestling with that."

Hopefully, after reading and watching 13 Reasons Why, teens and adults alike will take its message to heart, and be there for the people in their lives who are hurting and just need to feel safe.