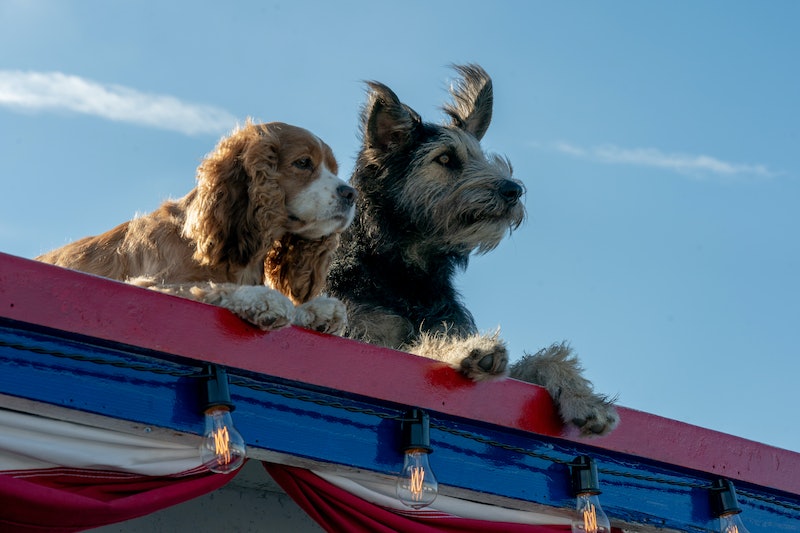 Onscreen they look to the world as if they've always been puppies in love, but the canine stars of Disney+'s Lady and the Tramp didn't fall in love at first sight. Last November, Bustle visited the Savannah, Georgia set of the upcoming streaming film, where two of the movie's dog trainers, Mark Forbes and Mathilde de Cagney, revealed how the four-legged leads formed a bond after getting off to a rocky start.

Just like in the movie, Rose (Lady) and Monte (Tramp) come from two different worlds. When she was cast, Rose was a four-year-old hunting dog whose Utah family was looking to re-home her. Monte was a mixed breed shelter dog in Arizona, not quite a year old when he was chosen to become a Disney star. His puppy nature meant that he was eager to befriend everyone, but Rose wasn't quite so sure about her leading man.

Over time, Monte wore Rose down, until it became natural for the pair to lie down next to each other or lick one another's faces. They even reenacted the 1955 animated classic's iconic spaghetti scene together — although it was more messy than it was romantic without a little help from the special effects department.

In the movie, Tessa Thompson voices Lady, while Justin Theroux will help bring Tramp to life. But while they required some human help to give their characters a voice, Monte and Rose brought their own personalities to set. "He is not necessarily a Tramp, he's more of a rascal," Forbes reveals of Monte. "He's just playful, he's very mouthy and footy, and he just wants to play all the time."

As for Rose, she's no Lady, according to her trainer — despite the fact that she wears dog hair extensions and went through a "Pretty Woman transformation," according to producer Brigham Taylor. "She is very strong-willed, determined, dominant, and very smart," de Cagney says. "She's more of a tomboy. She likes to give orders and take charge, but on the other hand, she also has a sweetness to her." Forbes adds, "She definitely wears the pants in the relationship."

Together, they — along with their stand-ins — recreate the opposites attract love story of Lady and the Tramp for a new generation. And although they got off to a rocky start, Monte was happy to let Rose be the alpha, and in return she gave rescue dog costar her seal of approval.

Lady and the Tramp will be streaming exclusively on Disney+ starting Nov. 12.