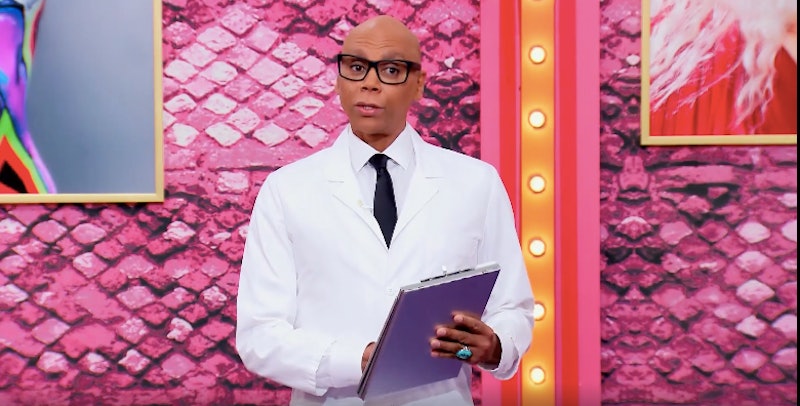 If you think Grey's Anatomy is dramatic, you clearly haven't watched a bunch of drag queens put their spin on the show. During the March 27 episode, Drag Race did a Grey's Anatomy challenge aptly titled Gay's Anatomy that combined all of the ABC series' most over-the-top elements into one skit. From supply closet hookups to emergency transplants, see the hilarious highlights below.

She actually played one of two Meredith Gays, but more on that later. This iteration of the character had been the head surgeon at Lady Bunny Memorial Hospital for 69 years, and introduced herself as being "famous for my surgical skills and my bad taste in men." Sherry Pie played her grouchy, wheelchair-bound mother who was injured in a near fatal tucking accident (yes, tucking, not trucking).

A nod to Grey's Anatomy creator, showrunner, and executive producer Shonda Rhimes, "boss b*tch" Rhonda kept the hospital in tip-top shape, alerting the doctors of a patient with "analphylactic shock" in room one, "diverdickulitis" in room two, and "10 homotomas in the waiting room."

Dr. Okurr tended to Henny's (Aiden Zhane) incurable restless ass syndrome (RAS), and then accidentally killed her by unplugging life support to charge her phone. Luckily, Henny returned as a ghost, and they celebrated by having "spooky sex" on the hospital bed. Meanwhile, Dr. Stevens assisted in the surgical separation of two drag queens impaled by a giant fork (Heidi N Closet and Crystal Methyd) and the delivery of a baby drag queen, all the while wishing someone would just "McBang" her in the supply closet already.

"When you've been here for 673 episodes — I mean, weeks — you've seen everything," Meredith said, poking fun at how long Grey's Anatomy has been on air. Before delivering Baby Dearest (played by Nicky Doll), she retrieved a literal bomb from a hysteric Mimi's nether regions. It blew up in her face when Dr. Stevens gave her a hug, prompting an emergency face transplant. Thankfully, Mimi and Baby were at least left semi-happy and healthy.

The skit closed with the big reveal of Meredith's new face, aka Jan's debut as Dr. Gay number two. "Life in a hospital can be truly sickening," she narrated in the final scene. "There's no shortage of emergencies or love or family. But one thing's for sure, there are moments you'll never forget — no matter how hard you try."

Shonda is probably signing off on the Gay's spinoff as we speak (er, type).

More like this
Shonda Rhimes Responded To The Surprise Exit Of A Day 1 'Grey's Anatomy' Figure
By Grace Wehniainen
This 'Bachelor' Contestant Had The Best Reaction To Wearing The Same Dress As Another Woman
By Grace Wehniainen
'Bachelor' Star Cassie Randolph’s Sister Is In The 'Yellowstone' Spinoff '1923'
By Grace Wehniainen
Everything To Know About 'The Real Housewives Ultimate Girls Trip' Season 4
By Jake Viswanath
Get Even More From Bustle — Sign Up For The Newsletter
From hair trends to relationship advice, our daily newsletter has everything you need to sound like a person who’s on TikTok, even if you aren’t.