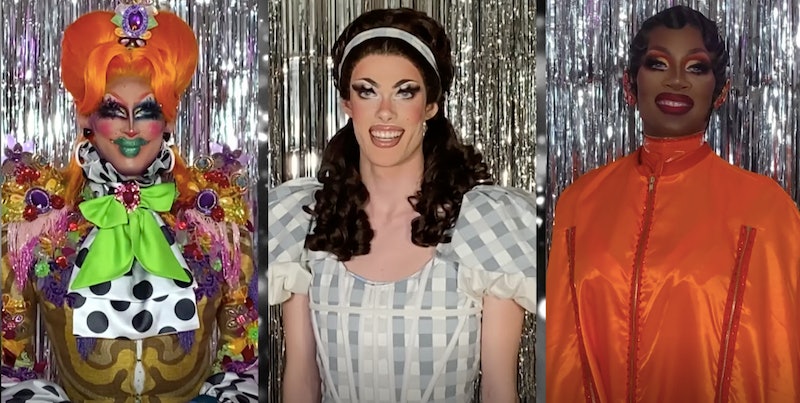 When the coronavirus pandemic inevitably forced Drag Race finalists Jaida Essence Hall, Gigi Goode, and Crystal Methyd to film the Season 12 finale remotely, they were disappointed to miss out on the energy of a live audience. But it was also a chance for them to do what drag queens have always done well: adapt.

"I think queens have always been versatile, and we've always tried to make it work," Season 12 winner Jaida tells Bustle. "There have been times when we've worked in some bars and stuff that are shaky, honey. Like there is no way I'm gonna be able to do a performance in here. And girl, within an inch of your life, an inch of the bar, and an inch of like, stage space, you make it happen. And so this was the same way."

Watching the Milwaukee native and her fellow queens lip-sync for the crown from their respective living rooms, you could even argue that they got more creative. "Being in Springfield, Missouri, not having access to all the things that I would normally want to like, prepare some finale eleganza look, I definitely pushed myself to think outside the box and use the materials that I had at home," Crystal explains. "And it was actually really, really fun. And we were able to do a performance in a way that you wouldn't be able to do on stage."

For example, Crystal played both a mama bird and baby bird during her performance of Nelly Furtado's "I'm Like a Bird." She never would have been able to "feed" herself — aka spit green liquid from one frame dressed as the mom and catch it in the next as the baby — if she were performing live. Like Michelle Visage said during the finale, "I never thought regurgitation would make it into Drag Race, but somehow it did, and I feel better knowing that her baby bird was nourished."

Gigi, meanwhile, says filming the finale from home actually made her feel like she had more control over her performance. She even installed a custom-made backdrop for her lip-sync of Aha's "Take On Me." "If I'm in drag, if I'm in my fantasy, if I'm in the hair, the makeup, the outfit," she says, "Give me a prompt and I will give it to you."

More like this
These 'Bachelor In Paradise' Reunion Leaks Tease A Very Messy Finale & Surprise Guest
By Grace Wehniainen
Yes, That Is Victoria & Another ‘BiP’ Alum In Zach’s ‘Bachelor’ Trailer
By Kadin Burnett and Grace Wehniainen
Everything To Know About 'RHONY' Season 14
By Jake Viswanath and Alyssa Lapid
Twitter Is Very Torn About The Winner Of 'Dancing With The Stars' Season 31
By Jake Viswanath
Get Even More From Bustle — Sign Up For The Newsletter