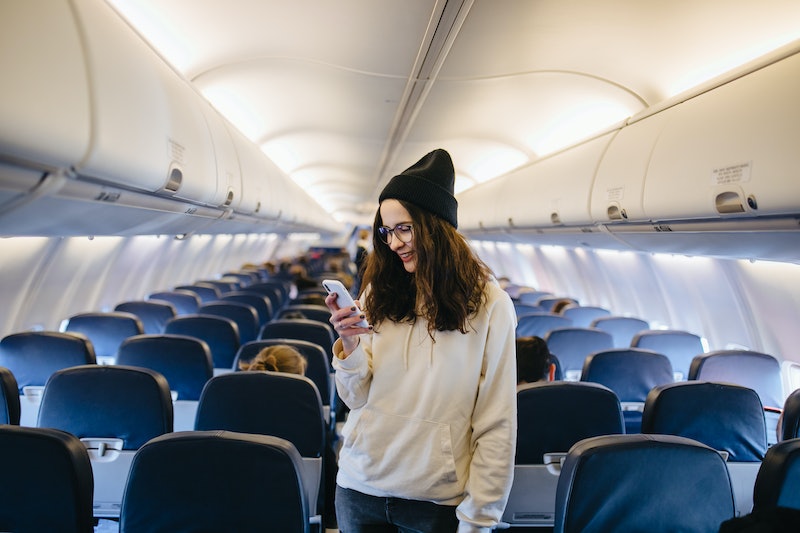 Nobody likes the middle seat on an airplane. While in it, you're most likely squished between strangers — strangers who may have questionable choices in airplane snacks, like tuna or hotdogs, and strangers who you'll go to elbow battle with over both of your arm rests. It's generally a claustrophobic nightmare. But some short-haul airplanes may be upgrading the middle seat — and if they do, there's a good chance you'll never have to feel "stuck" with your seat assignment ever again.

As you travel from one city to the next via air, you want to be as comfortable as possible. The window seat offers a view of the world below which can make for excellent Instagram story updates. The aisle seat allows you to get up to stretch your legs as you please — per the seatbelt sign's status, of course. The middle seat is... a seat. But thanks to Molon Labe Seating, the middle seat is experiencing a renaissance and you may not mind booking it.

You won't have a better view of the outside world, and you'll still have to excuse yourself as you step over the legs of the person on the aisle, but you will have more room. And that is, really, all I could ever think of asking for. According to ABC, the middle seat upgrade has been approved by the FAA and would feature a wider seat as well as more elbow room.

The seat, referred to as S1: Space Seat, will be set lower and a bit behind the bordering seats. The staggered seating allows the person in the middle seat to not be as miserable as they may have once been on a previous flight in the dreaded seat. Battle with your elbows no more. Your arm rest space will be obvious and any elbow to cross into your middle seat territory would be an obvious intruder. Because of the staggered design the middle seat will reach a width of 21", making this once despised seat actually desirable. The design may seem simple but it is a major game changer for travelers.

The new middle-seat friendly row will also feature more lateral space for the middle seat, a smartphone/tablet holder, USB and a latchless table. According to Molon Labe Seating the S1: Space Seat is being designed for short haul economy flights, and at least one air carrier in the U.S. has put in an order for the new seats.

According to Fast Company, the unnamed U.S. airline plans on installing this new design on 50 of their airplanes by the end of 2020. According to me, the skies will become friendlier and everybody will have the equal opportunity to rest comfortably on short haul flights, finally.

Molon Labe Seating has also developed a way to make boarding and de-boarding a more civilized and comfortable process. No longer will you drop your carry on onto the head of someone waiting to getting off the plane. The S3: Side Slip Seat serves the purpose of widening the aisle. According to Molon Labe Seating, "the minimum aisle width (by regulation is 20"). So our aisle is 20" in flight and during loading/unloading opens up to 42"." Finally, on a flight of hundreds, everyone will have more personal space.

More like this
You Can Stay At The 'Hocus Pocus' House On Airbnb
By Alexis Morillo
Craving The Beach? Here's Your Guide To A Solo Vacation In Turks & Caicos
By Alexis Morillo
The 5 Best Laptop Power Banks
By Vanessa Spilios
TikTok's Butter Board Might Be The New Cheese Plate
By Emma Carey
Get Even More From Bustle — Sign Up For The Newsletter