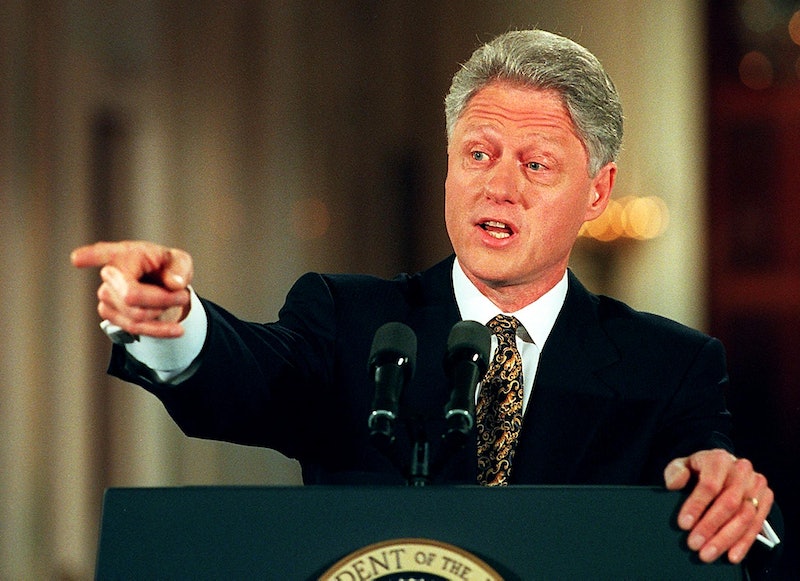 In director Lisa Bryant's Netflix docuseries Jeffrey Epstein: Filthy Rich, IT worker Steve Scully claims he once spotted Jeffrey Epstein and Bill Clinton together on the financier's private Caribbean island, Little St. James, where he often entertained powerful friends and allegedly trafficked underage girls for sex. The former U.S. president has maintained, however, that he's never been to the so-called "Pedophile Island," though he did have a business relationship with Epstein through the Clinton Foundation after he left office in 2001.

Following Epstein's arrest on sex trafficking charges in July 2019, Clinton released a statement via his spokesperson Angel Ureña saying that he knew "nothing about the terrible crimes Jeffrey Epstein pleaded guilty to in Florida some years ago, or those with which he has been recently charged in New York." According to Ureña, Clinton "took a total of four trips on Jeffrey Epstein's airplane" to Europe, Asia, and Africa as part of his work for the Clinton Foundation in 2002 and 2003. He explained that staff, supporters of the foundation, and his Secret Service detail traveled on every leg of every trip.

Around the same time, Clinton had one meeting with Epstein in his Harlem office in 2002, and made one brief visit to Epstein's New York apartment with a staff member and his security detail, per Ureña. "He's not spoken to Epstein in well over a decade, and he has never been to Little St. James Island, Epstein's ranch in New Mexico, or his residence in Florida," the same 2019 statement concluded.

Following one humanitarian trip to Africa in 2002 that also included actors Chris Tucker and Kevin Spacey, a representative for Clinton told New York magazine that Epstein was "both a highly successful financier and a committed philanthropist with a keen sense of global markets and an in-depth knowledge of twenty-first-century science." The representative added that Clinton "especially appreciated [Epstein's] insights and generosity during the recent trip to Africa to work on democratization, empowering the poor, citizen service, and combating HIV/AIDS.”

Despite his rep's claims to the contrary, Clinton reportedly took several more trips on Epstein's private jet, the "Lolita Express," from 2001 to 2003, as flight logs obtained by Fox News reportedly show, according to the Associated Press. The "at least 26 trips . . . included extended junkets around the world with Epstein and fellow passengers identified on manifests by their initials or first names," per the outlet. However, prosecutors have never linked Clinton to any of the legal accusations against Epstein.

Clinton and Epstein also shared a connection through British heiress Ghislaine Maxwell, who has been accused in civil suits of "aiding and participating in Epstein’s sexual abuse of minors," per The Guardian. (She has denied these accusations.) Politico reported in 2019 that Maxwell met the Clintons after she and Chelsea became "close friends" in the early 2000s. Maxwell later attended Chelsea's 2010 wedding to Marc Mezvinsky, but a Clinton family spokesperson disputed Politico's characterization of the two women ever being close. Regardless, a photo of the former president with Maxwell aboard Epstein's jet during the 2002 African humanitarian trip surfaced in January.

Although discrepancies remain in regard to exactly how close Clinton was to Epstein and his associates, their connection through the Clinton Foundation's philanthropy seems to be one fact that has not been disputed.

More like this
Brittany Snow Files For Divorce From Tyler Stanaland After 'Selling The OC' Drama
By Grace Wehniainen and Radhika Menon
All The ’70s Easter Eggs You Missed In 'That ’90s Show'
By Grace Wehniainen
Everything To Know About A Potential 'Lockwood & Co.' Season 2
By Gretchen Smail
'The Crown' Season 6 Has Suspended Filming "Out Of Respect" For The Queen's Death
By Bustle Staff
Get Even More From Bustle — Sign Up For The Newsletter
From hair trends to relationship advice, our daily newsletter has everything you need to sound like a person who’s on TikTok, even if you aren’t.