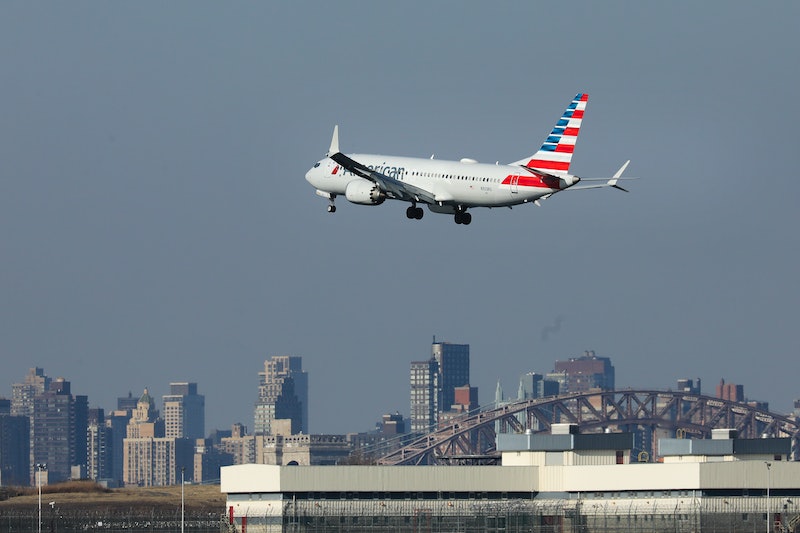 Days after an Ethiopian Airlines plane crashed and killed 157 people, President Trump has ordered all Boeing 737 MAX planes grounded until further notice, the New York Times reports. The model of aircraft has received intense scrutiny in light of Sunday's disaster, which was the second time in less than six months that a Boeing 737 MAX has crashed minutes after takeoff.

“Boeing is an incredible company,” Trump said, according to the Washington Post. “They are working very, very hard right now and hopefully they’ll very quickly come up with the answer, but until they do, the planes are grounded." He added that any 737 MAX jets currently en route to the United States "will be grounded upon landing at the destination." The FAA also announced the grounding in a separate statement.

In a statement, Boeing said it supports Trump's decision, although the company added that it "continues to have full confidence in the safety of the 737 MAX." The news comes after countries around the world responded to the crash by banning the aircraft, which was just sent to airliners in 2017, from their respective airspaces.

Until Wednesday, the United States and Canada had resisted calls to ban the 737, even as China, India, Australia, all of Europe, and many other countries had declared the aircraft unwelcome over their airspaces. But the Canadian government relented on Wednesday morning, and Trump followed its lead hours later.

“We are supporting this proactive step out of an abundance of caution," said Dennis Muilenburg, president, CEO, and chairman of Boeing, in the company's statement. "Safety is a core value at Boeing for as long as we have been building airplanes; and it always will be. There is no greater priority for our company and our industry. We are doing everything we can to understand the cause of the accidents in partnership with the investigators, deploy safety enhancements and help ensure this does not happen again.”

Also on Wednesday, the Wall Street Journal reported that Boeing is working on significant update to the 737 MAX's stall-prevention system. Currently, the system relies only on one sensor to detect the angle of the plane's nose; the update, which the Journal reports has been in the works since before the Ethiopian Airlines crash, will have multiple sensors installed in the system in case one of them fails. According to the Journal, the completion of this update was pushed back five weeks as a result of the government shutdown in December and January. An FAA representative has since told Bustle in a statement that the shutdown "did not delay the stall-prevention system enhancements to the Boeing 737 Max 8."

Sunday's crash rattled travelers around the world. Before the United States banned the plane from its airspace, Southwest Airlines announced that it would waive fees to allow customers with upcoming trips on Boeing 737 MAX planes to switch to flights on other aircraft if they wanted to. Meanwhile, Kayak and TripAdvisor added features that allow users to filter out the 737 MAX from searches on the respective websites, CBS News reports.

While announcing the temporary grounding of all 737 MAX planes on Wednesday, Trump said the decision was based on "new information and physical evidence that we've received from the [crash] site," although he didn't elaborate.