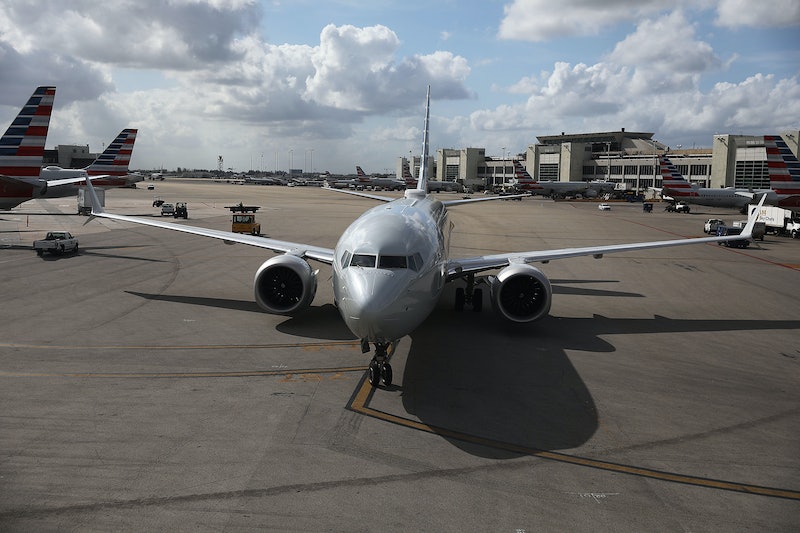 The aviation world is still grappling with fallout from the Ethiopian Airlines crash on Sunday, which killed 157 people. Dozens of countries around the world have since grounded the model of aircraft that crashed, the Boeing 737 MAX. According to the Wall Street Journal, Boeing had planned to update a critical part of the plane's software in January — but the government shutdown delayed the Boeing 737 MAX update by five weeks.

Update: After this article was published, a spokesperson for the FAA said in a statement to Bustle that the shutdown "did not delay the stall-prevention system enhancements to the Boeing 737 Max 8. On Jan. 7, FAA recalled the necessary personnel to support the development and approval of the Maneuvering Characteristics Augmentation System (MCAS) software fix. On Jan. 21, Boeing submitted the proposed fix to the FAA for certification. Boeing is currently testing the fix.”

Earlier: Boeing tells Bustle that the company has no comment on the Journal's report.

The Ethiopian Airlines crash was the second Boeing 737 MAX plane to crash in less than six months, after a Lion Air jet went down over Indonesia in October. The Journal reported Wednesday that after the Lion Air crash, Boeing ordered a significant update to the 737 MAX's stall-prevention system. Currently, the plane's system uses a single sensor to measure the angle of the plane's nose, but the company plans to add multiple sensors in order to safeguard against the possibility of a single sensor failing, according to the Journal.

Boeing announced on its website Monday that it would be implementing several new safety features "designed to make an already safe aircraft even safer." These will include "updates to the Maneuvering Characteristics Augmentation System (MCAS) flight control law, pilot displays, operation manuals and crew training," Boeing said. According to both Boeing and the Journal's reporting, these changes are expected to be required of all 737 MAX jets by the end of April.

Shortly after the Journal report was published, the FAA announced that it would be grounding all Boeing 737s MAX jets in the United States and banning the aircraft from American airspace "pending further investigation." The agency cited "newly refined satellite data" and "new evidence collected at the [crash] site and analyzed today." Trump provided a similar explanation while speaking to reporters Wednesday.

This came after the United States faced criticism for being one of the few major countries, other than Canada, to not ground all Boeing 737 MAX planes. The FAA released a statement Tuesday explaining why it wasn't yet grounding the jets; according to the New York Times, this statement was released after the head of Boeing, Dennis Muilenburg, called Trump and personally assured him that the 737 MAX is safe.

According to the Journal, Boeing decided to upgrade the aircraft's sensors in response to preliminary data from the Lion Air crash, which suggested that the plane's lone sensor sent incorrect data to the stall-prevention system, triggering a series of events that ultimately brought the flight down.

The Journal reports that implementing the update has been slow for a variety of reasons. In addition to the government shutdown, Boeing and the FAA butted heads over engineering and technical issues regarding the update, a source told the Journal, with regulators and company officials disagreeing on how extensive of an upgrade was required. One source told the Journal that the FAA ultimately agreed to the delay after concluding that the current design of the planes posed no imminent safety threat to travelers.

Trump initially reacted to the Ethiopian Airlines crash by declaring on Twitter that "airplanes are becoming far too complex to fly" and claiming erroneously that "pilots are no longer needed, but rather computer scientists from MIT." However, the Journal reports that Boeing's changes to the 737 will "rely more on technical safeguards than memorized pilot responses if the system misfires."