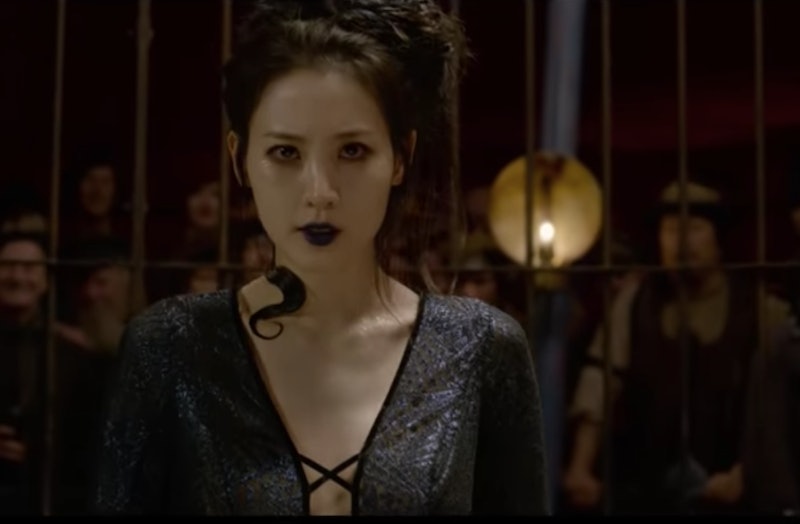 Yesterday, the final trailer for the latest Potterverse movie, Fantastic Beasts: The Crimes of Grindelwald, dropped and broke the Internet. One of the clip’s biggest revelations was that the character Nagini, Voldemort’s loyal snake minion and the seventh Horcrux in the original series, used to be a human woman. But many fans of the series balked at the idea that the Dark Lord’s famous snake companion was not only a woman of Asian descent, but one whose characterization plays into stereotypes about Asian culture.

Twitter user @Skimcasual, who translated the original Korean Twitter thread expressing fans’ outrage at the Nagini character reveal, tells Bustle that when she saw the thread, “It felt like when I saw Fan Bingbing in the X-men movies for the first time, or when I saw The Great Wall.” Both of these films were questioned by critics, the former for the famed Chinese actor's minuscule screen time (despite heavy use of her image in film promotion), and the latter for claims of white-washing. The viral Twitter thread prompted many users to criticize the problematic nature of making Nagini's character, a cursed woman who becomes a subservient pet and eventually meets a violent death by decapitation, an Asian woman in a fictional universe with so little Asian representation. Bustle reached out to Warner Bros. Entertainment Inc. and Heyday Films for comment on the controversy, and we will update this post when we receive a response.

Mid-trailer, in one blink-and-you’ll-miss-it moment, the character Credence Barebone, played by actor Ezra Miller, whispers "Nagini" to a woman who then morphs into a snake. Played by South Korean actress Claudia Kim, Nagini is revealed to be a Maledictus, which Pottermore describes as “a carrier of a blood curse which will ultimately destine them to transform permanently into a beast.” J.K. Rowling, the series author, later clarified in a tweet that Maledictus are always women, carrying a blood curse from birth that daughters inherit from their mothers. While the character in the trailer can freely shift from human to snake, Nagini is destined to become trapped in her serpentine form.

To understand why people are offended by Nagini's characterization, some context on the Potterverse is needed. In the wizarding world of Harry Potter, creatures ranging from house-elves to merpeople run rampant. Yet in both the book series and movie versions, this expansive world features very few characters of color, let alone characters of Asian descent.

Cho Chang, one of Harry Potter’s classmates and an early love interest, is the only significant Asian character in the entire series. In 2015, actor and activist Dylan Marron, who compiled a video of all the lines spoken by characters of color in the original Harry Potter film series, wrote in a Facebook post that people of color spoke for five minutes and 40 seconds out of the series' combined 1,207 minutes — that's 0.47 percent of the entire series' runtime. The issue cited by fans is not just that Nagini is a character of Asian descent; it’s that in a fictional world where so few characters of color are represented, one of the few visible Asian characters plays into the stereotype of Asian women being cunning, mysterious, and villainous.

In the new film, Nagini is a member of a traveling circus, where her transformative abilities are exploited as part of a circus act. In an interview with EW, Kim said this depiction of Nagini shows a different side of Lord Voldemort's evil sidekick. “It will be so interesting to see another side of Nagini,” Kim told EW. “You’ve only seen her as a Horcrux. In [Fantastic Beasts 2], she’s a wonderful and vulnerable woman who wants to live. She wants to stay a human being and I think that’s a wonderful contrast to the character.”

Yet the portrayal of Nagini, an East Asian woman-turned-snake (one whose venom was often “milked” in the books to help sustain Voldemort), is being criticized for being literally dehumanizing. Once she is transformed into a snake permanently, Nagini is stripped of her agency and voice as a human woman, and her sole purpose becomes carrying out Voldemort's will.

This stereotype has historical roots. Academic Edward Said’s 1978 book Orientalism reflected on the West’s often patronizing representations of Eastern societies, coining the term “orientalism." In an essay on the state of orientalism in Western cinema, BuzzFeed culture critic Alison Willmore writes that the term has since expanded to reference the stereotypical and often harmful ways in which the West represents Asia, including the fetishization of Asian men and women, as well as cultural appropriation. Willmore explains how pop culture and Hollywood generally treat "Asianness" as "a cultural buffet from which people feel welcome to help themselves to whatever they're inclined to take and reject what they aren't interested in.”

Countless threads of orientalism are woven throughout pop culture, where Asian characters or settings are often presented as weird, quirky, or intrinsically other, rather than being treated as elements that contribute to a work in any meaningful way. The 2003 film Lost in Translation, which stars two white, American characters against the foreign backdrop of Tokyo, exemplifies this. After the movie's release, Asian Mediwatch, an Asian-American advocacy group, argued that the film “dehumanizes the Japanese people by portraying them as a collection of shallow stereotypes who are treated with disregard and disdain.” More recently, the 2016 Marvel blockbuster Doctor Strange, which makes heavy use of Asian motifs and pseudo-Eastern mysticism clichés, caused a social media uproar by casting Tilda Swinton in the main role of a Tibetan monk. Willmore writes that “on one level, the fact that this regular stream of distorted images persists speaks to how unaware creators seem to be about what they're doing, but on another, it shows how little they seem to care.”

Beyond the academic context, as a woman of Middle Eastern descent, it's personally exhausting to see Asian stereotypes inundate pop culture time and time again. For every Crazy Rich Asians, which offers a rare Western depiction of Asian people as fully-developed characters, it feels like there's 1,000 Naginis that unravel any progress towards better representation of minorities in the media.

“I’m not happy [that Kim is] playing a villain,” continues the Twitter user Skimcasual, who declined to use her given name. “I’ve seen us playing the villain quite a bit … I'm sure Claudia did a splendid job working with what she was given, but I have a feeling her role is going to be one where she has minimal lines, just exists to be sexy or exotic, probably martial arts (even though everyone else just uses magic).”

Though it remains to be seen how the film series will handle Nagini’s character arc, for many fans, this felt like an unfortunate starting point for a series that is so influential on pop culture. In a fictional world where every manner of mystical creature gets prominent positive visibility, it's disappointing to see that human characters of color get little to none.

More like this
The 50 Most Powerful Characters In The Marvel Universe, Ranked
By Johnny Brayson and Nola Pfau
Lin-Manuel Miranda & Tituss Burgess React To 'Little Mermaid' Casting Backlash
By Radhika Menon
This Episode 6 Moment Foreshadows Viserys' Fate On 'House Of The Dragon'
By Grace Wehniainen
‘RHOSLC’ Star Jen Shah’s Arrest & Legal Drama, Explained
By Brad Witter and Jake Viswanath
Get Even More From Bustle — Sign Up For The Newsletter