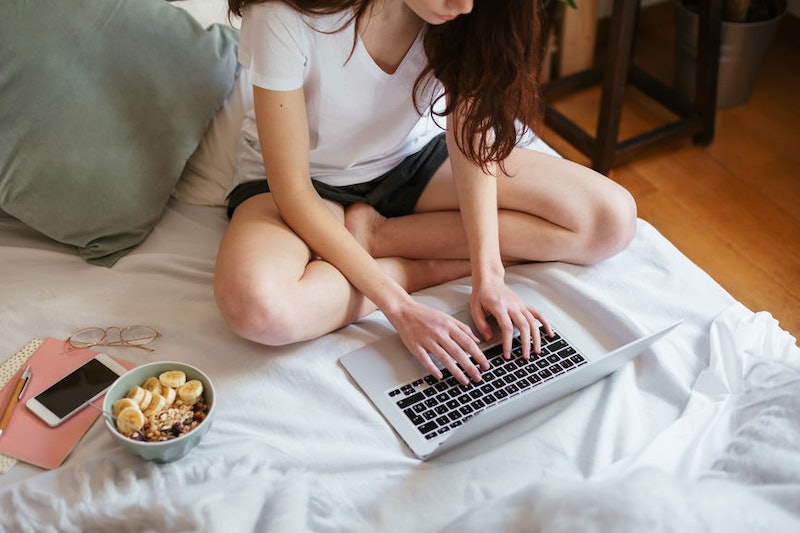 Since the advent of YouTube in 2005, vlogs have brought the concept of reality TV right into our living rooms, making well-paid internet celebrities out of "normal" people like British YouTuber Zoe Sugg — who now boasts nearly 17 million followers across two channels, a successful beauty range, and a three book series — and Canadian comedian Lilly Singh, who is now the first woman to host a late-night talk show in 30 years. Although vlogs have been hugely popular for years now, BookTube, a literary subset of the site, is a relatively new phenomenon.

Reading vlogs — in which YouTube users, often called BookTubers, read and review books while sharing tidbits from their every day lives — are growing in popularity among readers. These videos usually run anywhere between 15 and 45 minutes. The more popular accounts, like PeruseProject (which boasts over 271,000 subscribers), can fetch up to 50,000 views per video. Reading those numbers, you might be asking yourself, "Why would someone enjoy watching someone else... read?"

Well, it turns out there are some fascinating psychological reasons why readers love BookTube.

"For something like reading that can be isolating, a community with people excited about the same things can be extremely beneficial," Dr. Sanam Hafeez, a licensed psychologist and professor at Columbia University in New York City, tells Bustle. "Vloggers are talking about their favorite books, recommending them to their viewers, and sharing their niche interests. All of a sudden, [even] an introvert or someone with social anxiety has people they can talk to or feel connected to about books they feel passionate about. It can be a very gratifying and comforting experience. When a person finds a community, they're likely going to stay with it."

For viewers like 26-year-old Emily Peterson, 19-year-old Cierra Dawson, and 29-year-old Kaci Burrow, that connection is a huge part of why they log on.

Peterson, who counts Regan from PeruseProject and Chelsea from Chelseadolling reads among her most-watched BookTubers, says in an email to Bustle, "I really love getting a sneak peek into other people's lives and routines. It makes me feel close to them in a safe way — I'm invested in their lives. It's fun to have these people who feel like friends and whose opinions I can trust when I'm looking for reading recommendations."

For Burrow, whose favorite BookTubers include Monica Kim and Kayla from booksandlala, that sense of community holds true.

"People now more than ever crave authenticity and transparency. Unlike the heightened drama we see in reality TV, vlogging shows the natural flow of human life."

"I definitely feel more connected to a BookTuber through their vlogs — typically, they are more relaxed and not 'rehearsed.' It feels like I'm hearing about a friend's day," she says. "I also enjoy learning more about the BookTuber and seeing new places in their vlogs. It's so nice to see the lives and adventures of other book-lovers in the world."

Peterson, Dawson and Burrow all tune in to reading vlogs anywhere from three times a week, to every single day. It's that constant connection to likeminded readers that makes reading vlogs so watchable.

"The dialogue between viewers and vloggers [is] unmatched to anything social media has seen before," Dr. Hafeez says. "People now more than ever crave authenticity and transparency. Unlike the heightened drama we see in reality TV, vlogging shows the natural flow of human life — no gimmicks or plot twists. Living vicariously through these vloggers feel similarly to connecting with a friend."

While community is an oft-cited reason readers love BookTube, there is an additional emotional response that many viewers cite which might best explain why they keep coming back for more.

In a study published in Social Psychological and Personality Science, researchers from Tilburg University in the Netherlands watched two thousand vlogs on YouTube and examined the comments sections to find out how the videos influenced the emotions of their viewers and if the videos attracted viewers who already shared the emotions of the presenter. They found that what someone watches can influence how they feel, and that how they feel can influence what they watch. The team also found evidence that there is both an immediate and lasting emotional response to video content; cheerful vlogs make people cheerful, angry people are drawn to angry vlogs. No surprises here.

"If I am influenced by BookTube to buy a book, it's most often from a reading vlog where I got to see the emotions and reactions throughout the whole book."

"Vlogs allow for more genuine and real-time reactions to books that I love or that I'm interested in reading," Peterson says. "If I am influenced by BookTube to buy a book, it's most often from a reading vlog where I got to see the emotions and reactions throughout the whole book. In a review or a wrap up, I generally don't feel intrigued enough to buy a book."

Reading vlogs can also help viewers broaden their literary horizons. Dawson, who cites Naya from NayaReadsandSmiles and Amber from ReadingInfinitely among her favorite BookTubers, tells Bustle, "I have found myself adding a book to my TBR that is completely out of my genre comfort zone because a BookTuber, whose opinion I trust, recommended it to their audience in their reading vlog."

It turns out that if you've been looking for the best method to read more (and better) books, you might just might need to set aside an hour or so to watch other people do it first.

"I had this misconception that a reading vlog would be uneventful or cringe-y, so for awhile I scrolled past them," Dawson says. "I was very wrong!"