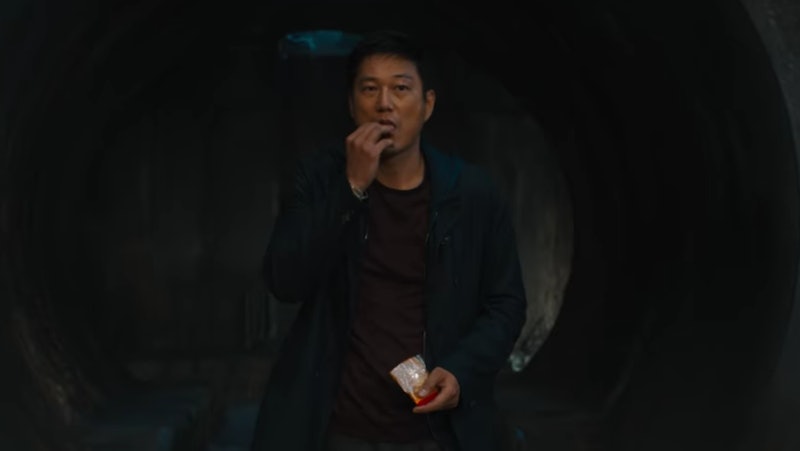 Start those engines (or rockets): The new Fast & Furious 9 trailer teased the return of a fan-favorite character. Per a new teaser released on Friday, it looks like the beloved Toretto crew member Han Seoul-Oh (played by Sung Kang) is somehow alive and well on the heels of his death in the third installment of the Fast & Furious franchise, Tokyo Drift. While the street racer initially perished in a fiery crash at the hands of British ex-operative Deckard Shaw (Jason Statham), Han makes a surprise entrance — with snacks in tow, no less — at the end of the F9 teaser.

While little is known plot-wise about the Justin Lin-directed installment, F9 appears to pick up after some of the major events put forth in the last film, The Fate of the Furious. Dom and Letty (Michelle Rodriguez) are now married and share a child, which offers renewed perspective for the film’s titular character. Dom says in the trailer, “I used to live my life a quarter mile at a time, but things changed. I’m a father now.” Dom’s bliss comes to a halt, however, when his past resurfaces in the form of a brother, Jacob (John Cena), described as an assassin and high performance driver. To top off the tension, Han returns in full glory. “Nice club house,” he says.

Han’s unexpected return signals a win for fans who’ve long advocated on his behalf. While killed off in Tokyo Drift, Han appeared in sequels such as Fast & Furious 6 and Furious 7 in flashback sequences. The crew is initially bent on avenging the death of their close friend, but in Fate of the Furious, Dom seemingly forgave Deckard Shaw for his actions. This subsequent turn in events prompted the #JusticeForHan hashtag that criticized the franchise’s handling of its only main Asian American cast member. On Twitter, fans were quick to celebrate Han’s return in F9.

In an interview with the Los Angeles Times on Friday, Kang reflected on his “emotional” return. "It feels like I’m going back to a family reunion,” he said. “It’s a relationship that has been missing in my life since the last Fast.” While he refrained from getting into the specifics of Han’s return, Kang said of how he and Lin approached the return of his character, “We know who and what Han is… this Han is older. The things that we’ve learned as men in our personal lives, I hope it can transcend on-screen.”

Fast & Furious 9 arrives in theaters on May 22.