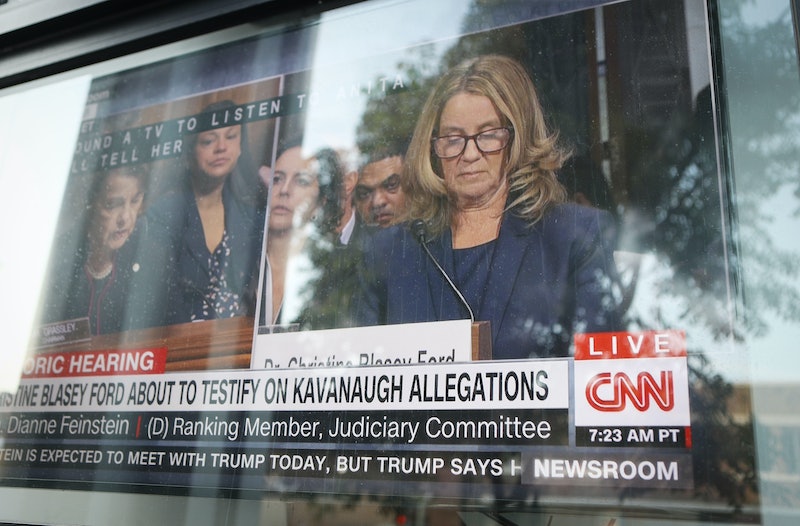 After an explosive day of testimony, followed by a last-minute vote to send his Supreme Court nomination to the full Senate for consideration, the FBI is investigating sexual assault allegations against Judge Brett Kavanaugh. The FBI investigation into the allegations will include anyone deemed necessary as long as the investigation concludes by the original deadline of one week, according to a report on Monday from The New York Times. Kavanaugh has vehemently denied the accusations against him.

The Times reported that Trump told White House counsel Donald McGahn to instruct the FBI to expand the investigation, which McGahn did. Bustle has reached out to the White House for comment.

Trump told reporters during a press conference in the Rose Garden on Monday that he supported an expanded investigation "within reason."

Then a reporter asked if Trump supported Kavanaugh being interviewed by the FBI. "I think so, I think it's fine if they do," Trump responded, according to the video.

As a part of that expanded investigation, Trump said he's fine with Kavanaugh's third accuser Julie Swetnick being interviewed. Kavanaugh also denied Swetnick's allegations against him. "That's totally false and outrageous. I’ve never done any such thing, known about any such thing," Kavanaugh told The New York Times on Sept. 26.

The FBI investigation came about because Arizona Republican Sen. Jeff Flake said an investigation into Ford's claim against Kavanaugh needed to be looked into before he could vote on Kavanaugh's nomination as a part of the whole Senate.

On Friday night, Flake said he would still likely vote for Kavanaugh as they're both conservatives. "I'm a conservative. He's a conservative," Flake told The Atlantic. "I plan to support him unless they turn up something — and they might."

On Monday, Flake was asked about potential witnesses who were having problems getting in contact with FBI investigators and if that would effect his vote on Kavanaugh. "It does no good to have an investigation that just gives us more cover, for example. We actually need to find out what we can find out," Flake said. "And we have to realize we may not be able to find out everything that happened. This is something that was a while ago."