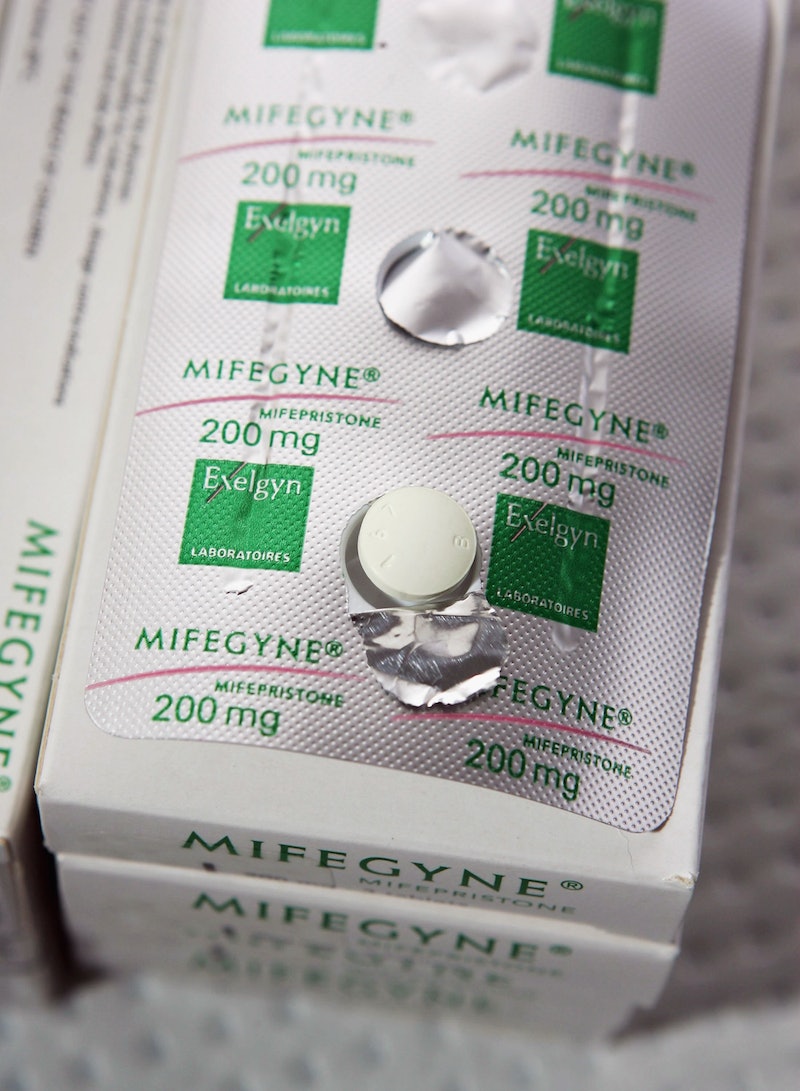 Months after announcing it was investigating Aid Access, the U.S. Food and Drug Administration (FDA) has ordered the online abortion pill provider to cease delivery to the United States. Launched in 2018, Aid Access allows those who pass the company's online screening process to purchase misoprostol and mifepristone, two drugs commonly prescribed together to medically induce an abortion within the first trimester. The FDA, however, has accused the company of introducing "violative drugs" into the U.S. marketplace. Bustle has reached out to Aid Access for comment.

"The sale of misbranded and unapproved new drugs poses an inherent risk to consumers who purchase those products," the FDA wrote in a warning letter sent to Aid Access. "Unapproved new drugs do not have the same assurance of safety and effectiveness as those drugs subject to FDA oversight. Drugs that have circumvented regulatory safeguards may be contaminated; counterfeit, contain varying amounts of active ingredients, or contain different ingredients altogether."

As Bustle previously reported, Women on Web founder Dr. Rebecca Gomperts began Aid Access with little fanfare in April. In October, the FDA confirmed to Bustle that it had launched an investigation into the online abortion pill provider as mifepristone is not legally cleared for sale online in the United States.

Gomperts had previously told The Atlantic that Aid Access followed a completely legal process as the FDA allows for medications to be imported for personal use. What's more, CNN has reported that Gomperts had previously called safety concerns regarding Aid Access "totally unfounded." She also claimed the FDA's restrictions on abortion medication were "based on politics, not science."

The FDA has previously told Bustle that it established a safety program known as a Risk Evaluation and Mitigation Strategy (REMS) in 2000 to ensure the safe use of mifepristone, which is often marketed in the United States under the brand name Mifeprex. This REMS included distribution restrictions, including a requirement that the drug only be dispensed in clinics, medical offices, and hospitals, or under the supervision of a certified prescriber.

According to Vox, the FDA has accused Aid Access and an online pharmacy network known as Rablon of violating FDA rules by selling unapproved versions of misoprostol and mifepristone outside of its established REMS program. "The substitution of unapproved drugs for FDA-approved prescription drugs poses significant health risks to U.S. consumers," the federal agency wrote in its warning letter to Aid Access.

But studies have shown that medication abortions obtained through online telemedicine are safe. In fact, CNN reported that data provided by the FDA showed that just 22 patients of the 3.4 million who've taken the drug as part of a medication abortion from its approval in 2000 to December 2017 have died.

A number of public health experts have thus called for the FDA to end what they have called its "overregulation" of mifepristone, arguing that the agency's REMS places "medically unnecessary burdens on patients and providers." What's more, women's and reproductive rights groups have accused the federal agency of "politicizing medication abortion" and targeting abortion access.

"Aid Access provides a vital service to women who want to safely and effectively self-manage their abortions at home," Executive Director of the National Women’s Health Network Cindy Pearson said in a statement. "If the FDA is truly worried about the safety of abortion pills imported from overseas, they should lift the REMS immediately and allow Aid Access to prescribe from US pharmacies." (According to the Atlantic, Aid Access uses an Indian pharmacy Gomperts trusts.)

Aid Access has 15 working days to respond to the FDA's letter with either a rebuttal to the federal agency's violation allegations or information on how it has, or plans to, correct the violations.