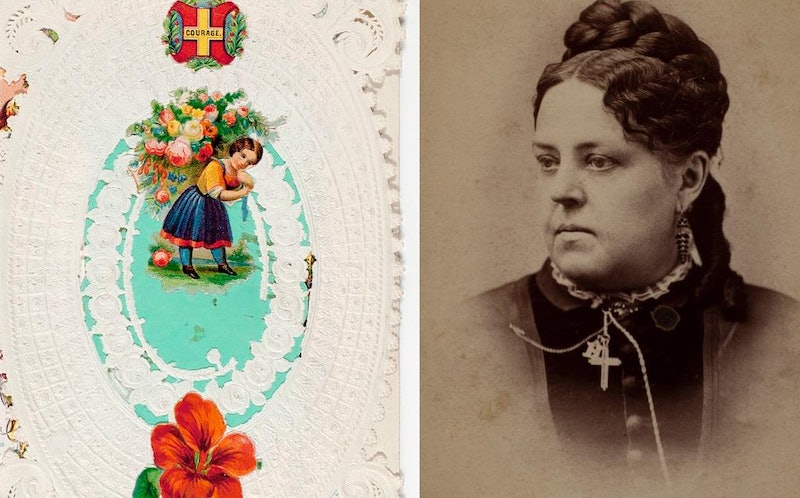 Valentine's Day is defined by many things — red roses, smooches in public, those faintly terrifying stuffed bears you find at the drug store — but one of its most popular aspects is the Valentine's Day card. Whether you're saying 'I love you' or 'I kind of think you're cute' or some intensely cool pop culture reference that implies affection, the card industry has something to match your feelings. However you feel about receiving that piece of colored card that says "I Choo-Choo-Choose You", though, the popularization of the modern Valentine's Day card industry is down to one of America's first female entrepreneurs, a woman who made her mark in the hugely restrictive 19th century and came out a millionaire.

Esther Howland is known as the mother of the modern Valentine's Day card, for good reason. According to librarian Mary Champagne, writing for the Library of Congress, she was born in Worcester, Massachusetts, in 1828, and was part of the burgeoning American card industry from birth; her father ran a stationery shop where she worked as a teen. She was, however, also the product of a strongly feminist family; her mother wrote the hugely popular New England Economical Housekeeper in 1845, a guide to domestic accounting that was part of one of America's first wave of published women. And Howland herself was one of the first generation of women to graduate from Mount Holyoke college.

It wasn't just her education that made Howland's fortune, though; it was her good business sense. By the mid-1840s, when she'd left college, Valentines were hugely popular in America, with thousands sent by mail every year. The poet Emily Dickinson wrote in February 1849 in a letter that "The last week has been a merry one in Amherst, and notes have flown around like, snowflakes." And it was into this industry that Howland, on a business hunch, entered in 1848, setting up a hand-made Valentine's card business, making these luxury products, which were previously a European import, accessible to a broader audience. She employed a collection of local Massachusetts women to produce intricately layered cards with lace, motifs, romantic images and messages. The entire third floor of the Howland home was converted into a card-making workshop, and all the results carried the mark of her design somewhere on them, usually a red 'H' in the upper corner or back, according to TIME.

Her first year, Howland sent out a dozen designs to suppliers and set her expectations low, expecting around 200 orders. She received 5,000. The Library of Congress also suggests that Howland, rather than Henry Ford, might be the original inventor of the "assembly line" technique of mass production, because every woman in her employment was given a specific task, from pasting backgrounds to cutting out lacy embellishments. Not only did she make her mark in corporate American history, she also gave a lot of skilled women financial empowerment. She also did this as a wheelchair user, after a serious knee injury in her early 30s.

Howland's house style is extremely distinctive. A greeting-card historian told TIME, “No other producer of commercial valentines understood so well their potential for the tactile communication of complex feeling." These weren't flat cards; they were often 3D productions, covered in imported lace, silk, embossed paper and elaborate cut-out pictures of lovers, doves and other symbols of romantic love. They were designed to be touched and treasured. These days they're highly treasured by collectors and museums. Howland introduced the "accordion" effect and mechanical movement to her cards, all handmade, and is credited with inventing the "lift-up" card, where the message is hidden under layers of lace (though it could also be the product of an anonymous worker in her workshop). Getting a top-of-the-line Howland card wasn't cheap, either; the most expensive versions were a dollar, a significant amount in American money at the time.

Howland earned a truly gigantic amount of money from her business, which was so successful that after 1879 it had to be moved from the Howland family home to factory premises. Press estimates vary between $25,000 and $100,000 — between $800,000 and $3 million in today's money. As a genteel woman of the 19th century, when women's behavior was tightly restricted and female entrepreneurs were incredibly rare, her success was unprecedented. She also published a book of 131 suitable Valentine's verses in 1879 to help people inscribe her cards, remarking at the time: "It is frequently the case that a valentine is found to suit, but the verse or sentiment is not right.”

In an interview with the Boston Globe towards her retirement, Howland explained that her card-making was just an extension of the "busywork" that well-born women of the 19th century did in their leisure time at home anyway. She just made money out of it. And the business produced spectacular success: it was incorporated as the New England Valentine Company, one of the first companies in American history to be headed by a woman, and merged with a competitor in 1879 to become a dominant force.

Howland never married, according to the New England Historical Society, which prompted some historians to crack bad-taste jokes about whether she was "immune" to the romance she sold, or to wonder if her success and rebellion against contemporary ideas about women's roles were simply too much for suitors to stomach. She was at the helm of her company for most of her life, until she sold it in 1880, in her early 50s, to competitor George C. Whitney, who was also located in Worcester. (In 1915 it was estimated that 90 percent of all the Valentine's cards sold in America came from Worcester, largely because of the efforts of Howland and her fellow business owners.) The company wasn't failing — far from it — but Howland wanted to nurse her dying father, who would pass away 2 years later. Howland herself would live until 1904.

The modern Valentine's market may be full of fuss and commercialism, but behind every card you receive in the mail is the genius of a truly remarkable American woman. Esther Howland challenged gender norms, invented new ways to express affection, changed the landscape of American business, and did much of it from a wheelchair. Think of her as well as your sweetheart as you lift up the lace on your cards today.