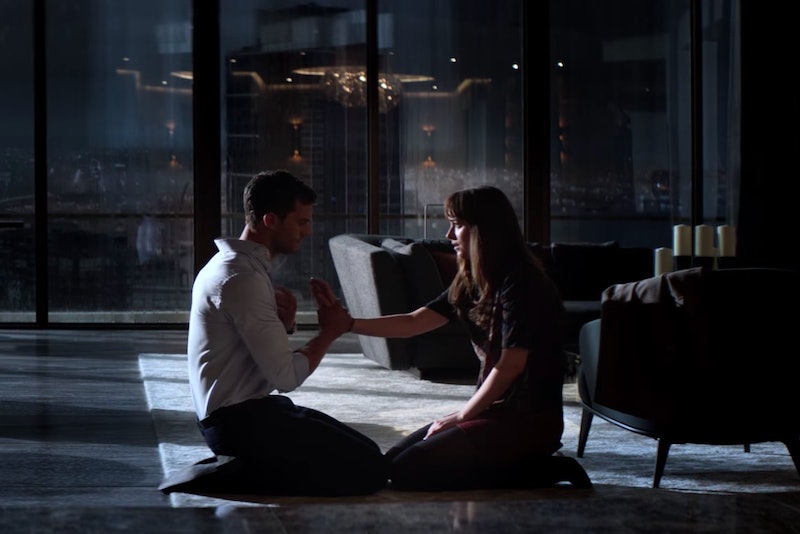 The Fifty Shades of Grey series has never really been about plot, but that does mean that no one cares about what changes were or were not made in each book-to-movie adaptation. The first film strayed from E. L. James' novel in some big ways, but with James' husband, Niall Leonard as screenwriter on the second film, Fifty Shades Darker, and a new director in James Foley, the sequel is much more faithful to the material. Comparing the Fifty Shades Darker movie vs. book, it's clear that the sequel film doesn't make big changes to James' novel, which should please the author's fans.

The basic plot of Fifty Shades Darker seen in the film is almost exactly as it is in the book. The threat from Christian's mentally unstable ex-submissive, Leila Williams, plays out almost identically to the book, with Leila showing up at Ana's apartment with a gun. Similarly, antagonists Jacky Hyde and Elena Lincoln are present in the movie in similar ways, with Elena's storyline in the movie tracking almost identically to hers in the book. There are, however, some key differences between Fifty Shades Darker the movie and Fifty Shades Darker the book, and almost all of them serve the same purpose: to make Christian Grey less of a stalker, and more of a complete character.

Fans of Fifty Shades Darker might be slightly disappointed to find out which sex scenes were left out of the final cut of the film. Despite being shown briefly in trailers, fans were not, sadly, treated to pool table sex. Nor did the vanilla ice cream sex scene make it into the film. There's also no hand job on a boat, no use of nipple clamps, and no vibrators. Leaving out some details is inevitable in any adaptation, and hopefully this just means they're saving more "kinky f**kery" for Fifty Shades Freed.

Christian's possessive nature is still on display in Fifty Shades Darker, but the character's most unattractive quality is definitely toned down in the film. For example, he doesn't intrude on her friendship with José, and he certainly does not dictate when and where she can see him (as he does in the books). And, when it comes to Ana's boss at the publishing house, Jack Hyde, Christian is a bit less of a caveman, but that's more due to a change in plot pacing than actual character development.

In the book, Christian is so upset by the idea that Ana might go to New York with her boss on a work trip that he uses his power as the new owner of the publishing house to freeze their funds, making the trip impossible. In the movie, Ana is insistent on going, but relents after talking with Christian in an adult manner, and admits that the trip was poorly planned (in the movie, she's only invited at the very last minute). Christian doesn't have to use his authority over her work place to get what he wants in the film, which helps make him seem like more of a boyfriend and less of a dominant.

At the Grey's masquerade party in the book, a dance with Ana is auctioned off for charity, and Christian busy it for $100,000. In the film, there is no such scenario. Instead, the movie turns the tables and has Ana bid $24,000 on a luxury trip to Christian's vacation home, essentially giving away the $24,000 Christian insisted on giving her for her car. (Money she refused to accept so sternly that he had to have it transferred into her account before she would take it.) This change helps tweak the dynamic of their relationship, and, again, make Christian much less controlling than he is in the book.

Fifty Shades Darker reveals much more about Christian's childhood and past relationships than Fifty Shades of Grey. While the books make it clear Christian is working on opening up, the film does something the book doesn't, which is to escape from Ana's perspective. In the movie, Christian has nightmares about his mother and an abusive man who burned him with cigarettes, something he doesn't tell Ana specifically. It's an odd change of perspective for the film series, but serves to paint a better picture of Christian's character and psychology.

In the book, Kate worries about Ana after she discovers an old e-mail on her laptop discussing the sex contract from Fifty Shades of Grey. In the movie, Kate is blissfully unaware of the details of Ana and Christian's earlier relationship. In fact, based on the opening scene, it looks like she didn't even know Christian and Ana ever broke up in the first place. (Oh, the things we hide from our best friends...)

Part of what helps Christian's character shift from the book to the film is the change in Jack's storyline. In the movie, Jack harasses Ana and traps her in his office before the trip can even happen. The scene, which stops just short of an inevitable escalation to sexual assault, allows for Christian to use his power to get rid of Jack in a way that is more protective and sensical than obsessive and irrational. But — spoiler alert — filmmakers also cut a few key details from Jack's character, like the fact that he sabotaged Christian's helicopter and caused it to crash. In fact, the helicopter crash was never explained, nor was it even alluded to as being potentially sabotaged by a third party. It isn't treated as a threat to Christian's life, which lulls Christian and Ana into a false sense of security.

The film ends with a menacing shot of Jack burning a hole in a Grey family photo with a cigarette, but does not explicitly tie him to the helicopter crash. Perhaps Jack's involvement will be revealed in Fifty Shades Freed, or they'll forget it altogether.

At the heart of it, most of the changes from the Fifty Shades Darker book to the movie are made to add to Christian's character. to make him slightly less creepy and controlling and a bit more damaged and sympathetic. Do I wish they had kept some of the racy sex scenes in there? Yes. But I think most fans, like me, will be grateful to have Christian's obsessive side toned down a bit. If not for us, then for Ana.