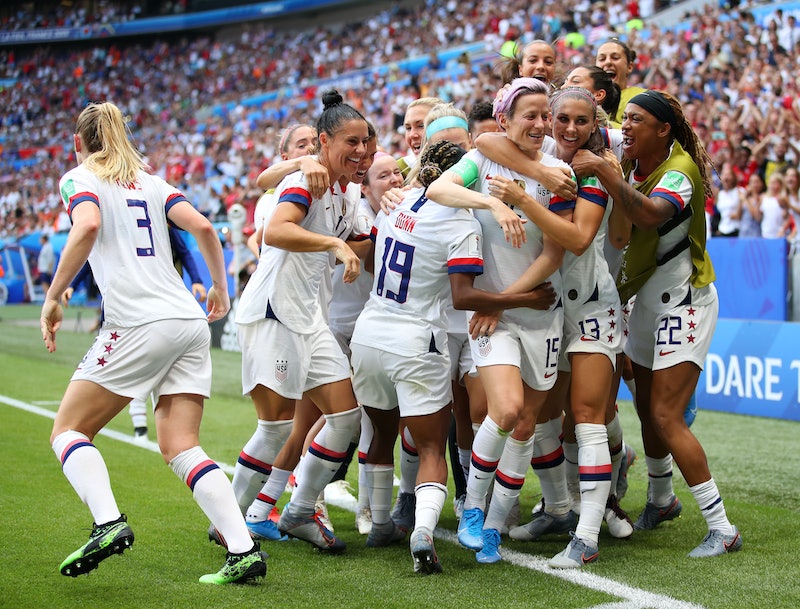 The Women's World Cup victory belongs to the USA for the second year in a row. The final score for the World Cup was 2-0 for the U.S. Women's soccer team in its final game against the Netherlands in Lyon, France on Sunday.

The team's defeat over the Netherlands comes after a hard-fought string of victories against England, France, and Spain. Megan Rapinoe and Rose Lavelle both scored in the second half, after being tied at the half. It was Rapinoe's 50th international goal, made from the penalty spot, which ensured the team's back-to-back title wins were that much sweeter.

Sunday's World Cup win was the fourth for the USWNT, following FIFA titles in 1991, 1999, and 2015. The U.S. final opponents were certainly underdogs in the game, as it was the first time the Dutch have made it to the Women's World Cup finals, as reported by Forbes. However, after their major wins over Sweden, Canada, and Japan, the final game was projected to be a must-watch match-up.

In the end, it was Rapinoe that secured the winning goal after an injury before the semifinal game against England. It seems that the star player, who has recently also made headlines for her political comments, returned with a vengeance that paid off mightily.

"It's surreal," Rapinoe said after receiving the honors, per The New York Times. "I don't know how to feel. It's ridiculous."

It was presumably a dreamlike experience for striker Alex Morgan as well, who captured the Silver Boot Award after scoring six goals during the tournament, and tying for tournament lead. Coach Jill Ellis also made the history books as the first manager to win consecutive Women's World Cup titles, shepherding players like Morgan and Carli Lloyd to back-to-back dominance in the sport. Ellis told The Times, "They put their heart and soul into this journey, and I can't thank them enough."

A full list of 2019 FIFA World Cup Award winners is as follows:

The World Cup title for the USWNT is not only a patriotic badge of honor following the Fourth of July, but a symbol of the activism the players themselves have displayed. Members of the women's national soccer team filed an equal pay lawsuit in March against the U.S. soccer federation. Morgan also addressed the criticism that the US Women's Nation Team has received for their goal celebrations during the tournament, telling reporters at the time, "I feel that there is some sort of double standard for females in sports to feel like we have to be humble in our successes and have to celebrate but not too much, or do something but always in a limited fashion."

Not only did the USWNT claim a victory on the field, but also off with their broader aspirations throughout the World Cup. Let the celebrations rage on.

More like this
Prince William Reveals Charlotte's Hidden Talent In Ultimate Proud Dad Moment
By El Hunt
Eurovision 2023 *Might* Be Held In The UK
By Sam Ramsden and Rachel Mantock
How To Fight For Reproductive Rights, Based On How Much Time You Have
By Courtney Young
Boris Johnson’s Leadership Is In Question – Again
By Bustle UK
Get Even More From Bustle — Sign Up For The Newsletter