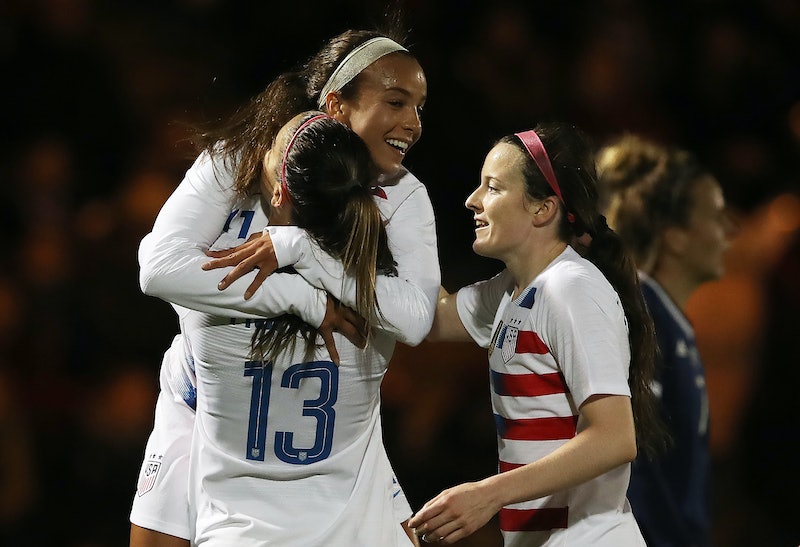 Gender pay inequality exists in the world of sports, too. On Tuesday, members of the women's national soccer team said the equal pay lawsuit they filed in March against the U.S. soccer federation isn't simply about the gender pay gap between them and their male counterparts. According to their remarks to Reuters on Equal Pay Day, their suit is about the broader issue of how female soccer players are treated in America.

The team's midfielder Megan Rapinoe told Reuters that the lawsuit was about the "bigger picture" of funding throughout soccer.

"For us it is really important to really look at the bigger picture of the compensation piece. I don’t think you can talk about compensation articulately or intelligently until you have a conversation about funding across the board," Rapinoe said. "So whether that is youth teams or staffing for each team or promotion and sponsorship, you know, advertising for both teams, I don’t think that that is equal yet."

In March, all 28 members of the U.S. women's soccer team filed a gender discrimination lawsuit against the national soccer federation in the U.S. District Court in Los Angeles, according to The New York Times. It was filed just three months before the team plays the Women's World Cup in France. In their lawsuit, the plaintiffs lamented "institutionalized gender discrimination" that they asserted had long existed in the federation.

The women's soccer team explained in the lawsuit in March that the issue of institutionalized gender pay gap didn't just affect their incomes; it came at the expense of soccer players' ability to pay for their medical treatments, as well as covering the fees for their training. On top of that, the gender pay gap hurt their access to playing on the professional field, the availability of the kind of transit they had to get to work, and more, according to the lawsuit.

That month, Rapinoe told The Times, "I think to be on this team is to understand these issues. And I think we’ve always — dating back to forever — been a team that stood up for itself and fought hard for what it felt it deserved and tried to leave the game in a better place."

Reuters noted that the U.S. soccer federation was "surprised" by the team's lawsuit. Its president, Carlos Cordeiro, released a response to the lawsuit in a statement he tweeted out in March. "The U.S. Soccer has been and continues to be a champion for women's soccer in the U.S. and on the global stage," Cordeiro tweeted. He added that the federation "believes that all female athletes deserve fair and equitable pay, and we strive to meet this core value at all times."

As the lawsuit goes on, some companies involved with soccer have tried to do some damage control. USA Today reported that the nutrition snack company Luna Bar said on Tuesday that a one-time payment of $31,250 would be given to each female soccer player representing the United States at the Women's World Cup this summer. Adidas also vowed to give women the same bonus that male players get if they won the Women's World Cup.

But those are one-time solutions to a problem that these players believe need broader, more consistent remedies. And if it doesn't happen now, they told Reuters that they won't give up. "We might not see equal pay among athletes within our generation," striker Alex Morgan told the news agency, "but the hope is that the future generations will."