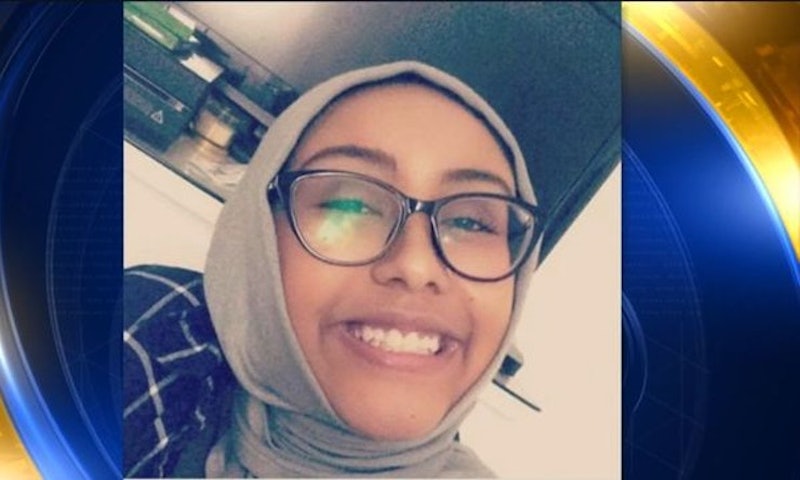 After making an arrest for a fire that was started in a D.C. fountain where a memorial for slain Virginia teen Nabra Hassanen was located, local police said they didn't believe the fire was a hate crime or motivated by bias against the Muslim teen.

The Washington D.C. fire department arrived to respond to the brush fire early Wednesday morning at Dupont Circle and put out the small fire inside the fountain — the same fountain where mourners gathered to honor Hassanen on Tuesday night, leaving posters and flowers in her honor. Later Wednesday morning, police said they arrested a 24-year-old from South Carolina, on vandalism charges of "attending or kindling bonfires."

There have been images and videos circulating of charred and damaged flowers and posters throughout the day, but police said that they don't believe the fire "specifically targeted" the memorial. Sgt. Anna Rose of the U.S. Park Police told The Huffington Post that police concluded the incident was "not a hate crime" and said there was no indication the suspect "was there to desecrate that memorial."

This announcement comes after the police in Fairfax County, Virginia, also confirmed they wouldn't be investigating the 17-year-old's murder as a hate crime, though she was killed and potentially assaulted after leaving her local mosque with a group of friends.

Further, many are still waiting to see if the investigation reveals that "the perpetrators acted based on a bias against the victim's race, color, religion, or national origin," or "on biases of actual or perceived sexual orientation, gender identity, disability, or gender," per the Hate Crimes Prevention Act of 2009.

Prior to the police's announcement, Madihha Ahussain, special counsel for anti-Muslim bigotry at Muslim Advocates, released a statement about the fire and pushed for unity and compassion during an increasingly scary time for Muslim Americans:

We are saddened to hear reports that a memorial site for Nabra may have been set on fire. The idea that this could happen while her family and friends are mourning her loss, and memorials are held across the country is appalling. This is a sordid reminder that hate is thriving in our nation. Now, more than ever, we need to come together and support one another and stand up against this type of insidious hate. The reality is that the current political climate has emboldened hate groups and individuals to attack other groups of Americans, and it will be up to all of us as to turn the tides of bigotry and violence that has become so common across the nation.

While police have determined that this fire incident is simply a case of vandalism in a deeply unfortunate location and not a hate crime or targeted incident, this incident remains another complicated obstacle for mourners seeking answers in the aftermath of Hassanen's tragic death.