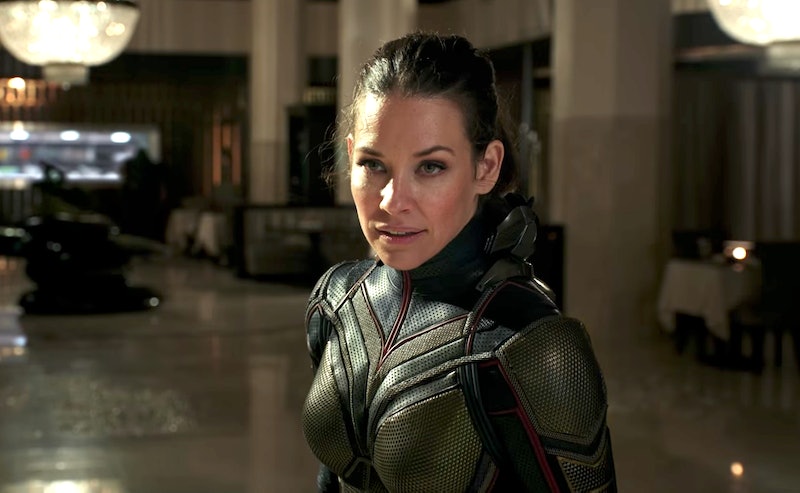 It's no Black Panther, but Marvel's other movies are still pretty exciting. The first Ant-Man and the Wasp trailer hit the internet on Tuesday, and it sure goes out of its way to reinforce that Evangeline Lilly's Wasp is even more amazing than Paul Rudd's Ant-Man — and just as necessary. Her costume is cooler, and crime fighting goes along so much more smoothly when she's around. The movie hits theaters July 6, and you won't want to miss seeing Lilly's superhero Wasp in action if this trailer is any indication.

The fact that the two heroes both share their power to shrink in size makes for even more use of surprising objects for weapons. For example: a Hello Kitty PEZ dispenser, which the Wasp blasts at her adversary who's following her on a motorcycle. The Wasp's additional features, namely her wings and blasters, make for even cooler fight scenes — including one where she dodges a bunch of knives that someone throws at her then runs along one knife's blade as if her opponent were helping her. The Wasp's costume was also designed by Dr. Hank Pym (Michael Douglas), and, in one hilarious scene, Rudd's non-hero persona Scott Lang asks Hank if the wings and blasters that the Wasp has were available for himself. Hank simply responds that the technology was available for Ant-Man; they just weren't used for him.

Really, the Wasp's undeniable superiority makes all of the Ant-Man's difficulties even more funny, which is what makes the minuscule hero so lovable in the first place. While the Wasp can simply fly anywhere she wants to go, Ant-Man has to hitch a ride with a fly. The two insect-inspired superheroes' hilarious dynamic sets up the summer Marvel to be a big hit.

Of course, the comedy will definitely be there, but a romance between the Wasp and Ant-Man was only hinted at in the upcoming movie's trailer. In a way, the dynamic between the two heroes seems more bitter than anything else, as the Wasp is clearly not happy that Ant-Man has forced them to be on the run from the FBI. It seems that the two heroes and Hank have to constantly pack up and move to avoid the feds, which involves Hank collapsing a building into a suitcase, which is pretty cool even if the Wasp hates having to do it.

In the Captain America: Civil War, Ant-Man fought on Captain America's team with the other Avengers in an attempt to stop the government from gaining control over the alliance of superheroes with the Sokovia Accords. Ant-Man ultimately got caught by the government, hence why he is now on the run from them, and, in the Ant-Man and the Wasp trailer, the Wasp tells Ant-Man that he would not have gotten caught had she been there. The Wasp's confidence is exactly why Marvel's female superheroes easily become fan-favorites, and there's no doubt that everyone will want to see more of her.

The good news is that the Wasp will join the Avengers in the group's fourth movie, which will come out in 2019. "There's an Avengers 3 coming out — it's a two-parter — and the Wasp won't be in the first part. She'll be in the second part," Lilly told Blastr at the 2016 New York Comic-Con. Based on the trailer for Ant-Man and the Wasp, the more that the Wasp can be around, the better everything is, both for Ant-Man and audiences.

It's certainly exciting to get a new badass female superhero, and from the looks of the new trailer, Lilly's performance as the Wasp will leave you buzzing.