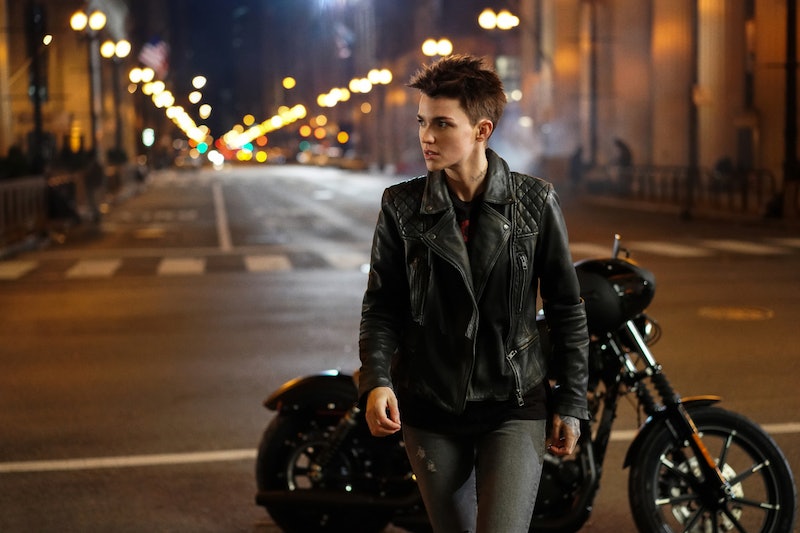 Batman may be gone, but Gotham City has a brand new hero ready to fight crime and take down the city's most notorious villains. On Thursday, May 16, The CW released the first Batwoman trailer, giving fans their first look at Ruby Rose as Kate Kane in her own show. Technically, Rose made her CW debut in 2018's Arrowverse crossover event, "Elseworlds." But this new trailer gives a closer look at Kate as she steps into the role of a masked vigilante and — even more excitingly — teases the possibility of the network's newest superhero romance.

According to Variety, the series kicks off three years after Batman (Bruce Wayne) disappeared from Gotham City, leaving criminals unchecked and the citizens in chaos. Kate — the daughter of Jacob Kane (Dougray Scott), who founded a private security firm called the Crows — returns to Gotham in the midst of its downfall, after "a dishonorable discharge from military school and years of brutal survival training." Against her father's wishes, Kate decides to follow in Batman's footsteps and become a masked vigilante herself after the Alice in Wonderland gang attacks her father and kidnaps one of his best officers, Sophie Moore (Meagan Tandy).

And considering it's a phone call about Sophie's precarious situation that sends Kate running to Wayne Manor to become Gotham's newest guardian — and the way that she caresses Sophie's face after finding her captive — it seems as if Kate definitely sees Sophie as more than her father's employee. In other words: get ready for Kate and Sophie to fill the Olicity-sized hole that Arrow left in your heart, while also breaking ground as the first lead same-sex romance in a superhero series on the network.

In the comics, Kate Kane is an out lesbian, who dated Sophie when they were both students at West Point, according to The Guardian. Though their relationship is over by the time fans meet Sophie in the Prime Earth series, the first trailer for the CW's adaptation seems to hint that there are still some lingering feelings between these two. By casting Rose, who is a proud member of the LGBT community, it's clear that the network won't be shying away from a possible romance between Kate and Sophie — or even from later introducing Kate' fiancee from the comics, Maggie Sawyer.

"This is a childhood dream," Rose wrote on Instagram back in August of 2018, after she was announced as the newest actor to play a caped crusader. "This is something I would have died to have seen on TV when I was a young member of the LGBT community who never felt represented on tv and felt alone and different."

In addition to teasing the romance between Kate and Sophie, the first Batwoman trailer will inspire female viewers by drawing direct comparisons between the way Kate is different from her cousin, Bruce Wayne. Despite having Luke Fox (Camrus Johnson), the son of Wayne Enterprise's Lucius Fox, alter Bruce's suit to "fit a woman," Kate gets mistaken for Batman while fighting crime.

"They think I'm him," she tells Luke, before deciding to add Kate's signature flaming red hair to her superhero outfit. "I'm not about to let a man take credit for a woman's work." Clearly, we're entering a brand new era of crime fighters on television.

"Without getting too into it, I think it's so relevant to now," Rose told E! News about the ways that Batwoman fits in to the current TV landscape. "We are telling such real stories, such grounded stories. We have such a beautiful, diverse cast. ... I think that's one of the things that is really important to see, not just like a flawless perfect superhero— which doesn't exist anyway."

She continued, "There's a lot in there that I think viewers can watch at any age group and find people to identify with and get solace out of that or inspiration or just feel like they're not the only person that's like that and that's super important."

With a badass feminist superhero fighting crime and taking names on the streets of Gotham City, and a thrilling lesbian romance at the heart of its story, it seems like it really will be only a matter of time before Batwoman becomes everyone's newest TV obsession.