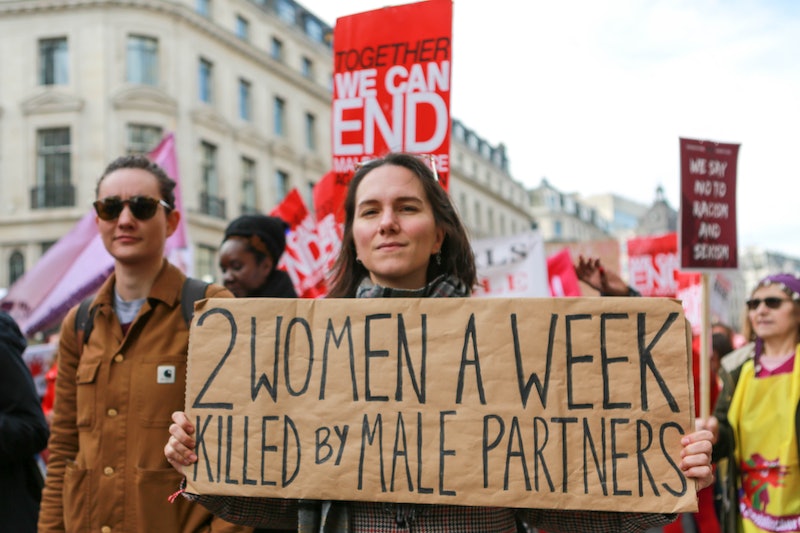 Almost a year has passed since a hugely important domestic abuse role was first advertised. Now, the government has finally appointed a domestic abuse commissioner for England and Wales. Nicole Jacobs, previously chief executive of domestic abuse charity Standing Together, has two decades of experience in the area, reports the BBC. She will be responsible for voicing the concerns of victims and survivors, advising the government, and, ultimately, driving change.

The job news is a welcome sight. When Boris Johnson took over as Prime Minister and announced a suspension of Parliament, the much-hoped-for Domestic Abuse Bill was seemingly cast aside. After uproar from survivors and charities, Johnson tweeted that his government is "fully committed to tackling this horrific crime" and promised to reintroduce the legislation in the Queen's Speech on Oct. 14.

If passed, the bill will expand the statutory definition of domestic abuse to include economic and controlling non-physical abuse. It will also ban the in-person cross-examination of victims by their alleged perpetrators in court and introduce measures allowing for earlier police intervention. Jacobs' role will have no formal powers until the bill becomes law.

There are concerns surrounding the reintroduced bill. As the Shropshire Star reports, the Home Office minister for safeguarding, Victoria Atkins, did not confirm whether the original provisions would remain. She told BBC Radio 4 she would have more details "in a few weeks' time."

Jacobs told the BBC domestic abuse campaigners are "relieved" Johnson has committed to reintroducing the bill. "It was heartening how quickly politicians from all parties were asserting how much they wanted to see the bill in the Queen's Speech and back on track, as well as from the public and people in the court system," she added.

Women's Aid, however, has raised concerns over the scope of the domestic abuse commissioner role. In a statement sent to Bustle, Adina Claire, acting co-chief executive of the charity, said it welcomes the appointment and is "confident [Jacobs will] be an excellent advocate for survivors of domestic abuse."

"We are concerned that this crucial role is a part-time position, given the extent of its remit," she continued. "Specialist domestic abuse services continue to face a funding crisis, with women and children facing a postcode lottery when trying to access help and support.

"Women’s Aid’s research shows that 57% of domestic abuse service providers were running an area of their service with no dedicated funding at all in 2018. With this in mind, we’re delighted that the new commissioner is someone who understands the specialist domestic abuse sector and can work to hold both national and local government to account."

Earlier this month, the BBC revealed that domestic violence killings in the UK had reached a five-year high. In 2018, 173 people were murdered as a result of such abuse.

Johnson has announced the introduction of a new Victims' Law, per PoliticsHome, designed to offer more support to those who have been a victim of crime. Specialist support services helping people affected by sexual assault and rape will receive an extra £5 million.

Shadow Justice Secretary Richard Burgon told the site: "The appalling reality is that under this Conservative government, rape conviction rates have fallen to the lowest level since records began. Sweeping cuts across the justice system have undermined how victims are treated and their confidence in it.

"The Tories need to stop simply recycling announcements about a Victims' Law, which they first promised more than four years ago, and start delivering on it."