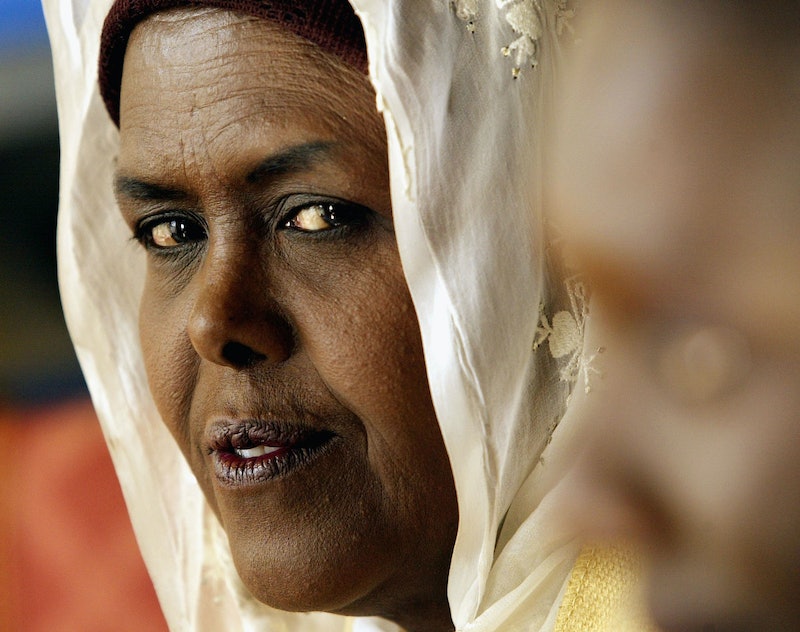 In April of 2017, a Michigan-based doctor was arrested, along with two others, on genital mutilation charges — the first time anyone has faced female cutting charges in the United States. But while it's the first case to involve criminal charges, that doesn't mean it's the first time female genital mutilation (FGM) has happened in the states. Experts believe the practice has slowly been picking up speed across the country — it's estimated that FGM cases have tripled since 1990.

The doctor in Michigan, Dr. Jumana Nagarwala, stands accused of performing the illegal procedure at a clinic in Detroit. Police say she is part of a larger "conspiracy" that has caused as many as 100 girls in Michigan and surrounding states to undergo the procedure in more than a decade. Nagarwala and the clinic's owners deny these charges; defense lawyer Shannon Smith calls the claims "mere speculation." The legal team representing Negarwala declined to comment to Bustle.

Female genital mutilation (FGM) is a term that refers to the removal (either full or partial) of external female genitalia, or any non-medical injury to the female genital organs. Communities that practice FGM have a variety of motives behind the procedure, ranging from religious reasons to the "treatment" of ailments. According to the World Health Organization, FGM carries no health benefits at all.

Prosecutors aim to prove that the mutilation began 12 years ago, according to The Detroit News, which reports that girls were treated at the clinic for "problems with their genitals." One girl involved in the case reportedly told the FBI that Nagarwala "pinched" her "on the place where she goes pee." A medical examination revealed that her genitals appeared abnormal, with the presence of scar tissue.

Another alleged victim had an incision and a small tear on her genitals, according to court documents. Defense lawyers in the case maintain that the procedure was not genital mutilation, and they claim that the government is "overreaching."

FGM In The United States

While this specific case prompted harsher legislation in the state of Michigan, it also sheds light on a problem that has been spreading quietly. According to a Public Health Report from the United States Citizenship and Immigration Services (USCIS), there has been a rapid increase of FGM happening to young girls in the U.S. since 1990.

The USCIS hypothesizes that the increase is due to a rise in immigration from countries where FGM is practiced, and that women and girls from Egypt, Ethiopia, and Somalia are most at risk.

“Many people do not understand how rampant [FGM] truly is and how detrimental it has been to the lives of millions of women."

FGM can cause significant health problems such as severe bleeding, issues with urination, infections, cysts, and childbirth complications. Sadly, FGM has been performed on an estimated 200 million girls and women alive today. The prevalence of this procedure is largely seen in countries in Africa, the Middle East, and Asia, but is not limited to these regions.

While Nagarwala's case is the first to be tried in court, experts believe FGM may be going on elsewhere in the States. Frank S. Ravitch, Professor of Law and Walter H. Stowers Chair in Law & Religion at Michigan State University, tells Bustle that there are likely “underground” practices of FGM in the U.S.

The Myths That Hurt FGM Survivors

Many people in the States still have a lot of misconceptions about what the practice entails. For example: The false assumption that FGM only happens to women and girls of other nations. Lisa O‘ Leary, Communications Officer at End FGM European Network, explains to Bustle that “many people do not understand how rampant [FGM] truly is and how detrimental it has been to the lives of millions of women."

"There are still 24 states with no legislation about FGM."

"It has played a key role in marginalizing women in many world societies and contributing to the power inequality between men and women as well as the control of women and girls' sexuality," she adds.

Some women who have undergone FGM do end up seeking reconstruction — a surgical procedure designed to restore the appearance of the vaginal area prior to cutting, as well as reduce clitoral pain and increase sexual pleasure. Reconstruction was developed in 2004 by a French urologist, Dr. Pierre Foldès. Since then, the procedure has become prevalent in the U.S., although efforts are being made to make the option available in African nations as well.

But reconstruction is not a guaranteed fix. According to Ivona Percec, Assistant Professor Of Surgery at University of Pennsylvania’s Perelman School of Medicine, the less severe the cutting, the easier it is to reconstruct. However, Dr. Percec also notes that the physical reconstruction is just one piece of the puzzle — many FGM survivors also have psychological trauma from the initial procedure.

“Advocating for a lesser form of FGM can just as easily be compared to a ‘lesser form of violence and discrimination’ against women and girls.”

“In my experience,” she tells Bustle, “the women who have sought out reconstruction of the area tend to have very negative feelings about what was done to them during their childhood without their permission," Percec says to Bustle. "They feel, in essence, quite robbed of their femininity, and of their female sexuality.”

Percec also tells Bustle that she’s heard of other examples within the U.S. from her patients. However, she notes that they’ve all been “hearsay."

A So-Called "Compromise" For FGM

Ravitch says that the practice can appear somewhat different in the U.S. “The more common sort in the U.S. [involves] a small ceremonial nick," Ravitch explains. He also emphasizes that the “nick,” or “pin pick,” as some call it, carries no health benefits.

This idea of “nicking” is somewhat prevalent: A controversial 2016 study published in the Journal of Medical Ethics suggested that “nicking” a young girl’s genitals would be a “compromise” to FGM. That's the argument Alan Dershowitz, an attorney consulting on Nagarwala's case, has advocated for — saying communities should abolish the extreme practice and substitute it for "a benign, sterilized, symbolic pinprick in the hood covering the clitoris, which is much like the foreskin of the penis.” He also compared the procedure to "cosmetic ear piercing" and male circumcision. Bustle reached out to Dershowitz for further comment, but he declined.

“The public needs to see the fight to stop FGM as part of the broader conversation we are having on women’s rights issues right now."

Women’s rights advocates and anti-FGM activists have repeatedly come out against the idea of the “symbolic pinprick,” noting that it still causes unnecessary harm to women and girls. The End FGM European Network published a response letter to Dershowitz’s suggestion, writing: “Proposing [the substitution of a pin prick] is to deny that FGM, in all its forms, is internationally recognized as a violation of a girl’s human rights and her right to physical, mental and psychological integrity."

Lisa O'Leary, the communications officer at the End FGM network, argues that “Dershowitz failed to see that the symbolic aspect of the practice and the very root causes of FGM." She tells Bustle: “Advocating for a lesser form of FGM can just as easily be compared to a ‘lesser form of violence and discrimination’ against women and girls.”

Fortunately, there has been some good to come out of the Michigan case. In July 2017, Michigan passed a series of new laws to increase the criminal punishment for FGM practices within the state. Now, performing FGM will result in up to 15 years in prison, rather than 10 at the state level. (The Michigan case, however, bears different consequences because of the nature of the charges.)

Even though there are federal laws against FGM, individual states still have work to do. Michigan, with its new laws, became the 26th state to ban FGM — meaning, there are still 24 states with no legislation about FGM.

Activists hope that the Michigan case will be a catalyst for Americans to realize the prevalence of FGM — and to take action on their own to help. Samantha Nerove, founder and CEO of the nonprofit America Matters, tells Bustle it's time for action; “The public needs to see the fight to stop FGM as part of the broader conversation we are having on women’s rights issues right now."