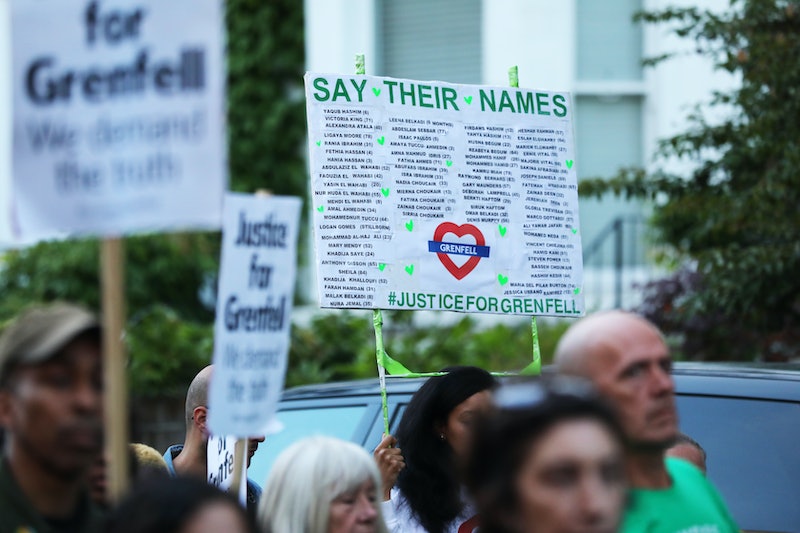 On Wednesday Oct. 30, 2019, inquiry chairman Sir Martin Moore-Bick will release a 1,000-page report that follows the first phase of an inquiry into the Grenfell Tower fire of June 2017. The official death count for the tragedy stands at 72.

According to the BBC (one of the news organisations to be given access to the document ahead of its publication), the London Fire Brigade (LFB) is a main focus of the highly anticipated report. Although the report does praise the LFB firefighters for their courage on the night of the blaze, as the BBC reports, Moore-Bick also noted there were "institutional" failings that resulted in "gravely inadequate" planning and preparation. He also criticised the commissioner of the LFB, Danny Cotton, for her “remarkable insensitivity” in response to her claims that she wouldn’t have changed anything. At the time, survivors of the fire called the commissioner’s comments "heartbreaking" and "disrespectful," according to the BBC.

In the report, Moore-Bick wrote:

Quite apart from its remarkable insensitivity to the families of the deceased and to those who escaped from their burning homes with their lives, the Commissioner's evidence that she would not change anything about the response of the LFB on the night, even with the benefit of hindsight, only serves to demonstrate that the LFB is an institution at risk of not learning the lessons of the Grenfell Tower fire.

The Guardian reports that Moore-Bick found the LFB had failed to train its incident commanders and firefighters to adequately understand the dangers associated with combustible cladding or to recognise when evacuation needs to occur. “Many lives could have been saved if her officers had identified sooner that the fire was out of control and told residents to evacuate,” he wrote.

Moore-Bick criticised the "stay put" policy, which meant residents were told by firefighters and 999 operators to stay in their flats, some staying put for two hours after the fire broke out, the BBC reports. Although the policy was abandoned at around 2:47 BT on the night of the fire, as the report states, the "decision could and should have been made between 01:30 and 01:50 and would be likely to have resulted in fewer fatalities."

The inquiry was based on evidence given from 88 firefighters, control room officers, and senior LFB commanders, as well as 35 of the survivors and residents from Grenfell. The second part of the inquiry will focus on the cladding and the refurbishment of Grenfell Tower.

Now that Parliament has decided it will not be leaving the EU on Oct. 31, the hope is that this report will get the full attention that it deserves, and that survivors and bereaved loved ones will be given answers to their questions about what happened on the night of the fire.