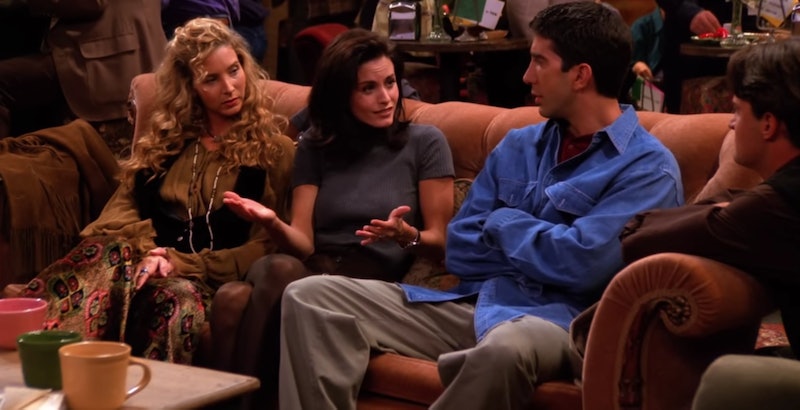 When news broke that Primark (or "Primarni" to true stans) was planning to launch a true-to-life replica of the famous Friends landmark, Central Perk café, British fans of the show could hardly contain themselves. Because no true Friends fanatic would EVER pass up the chance to pose for a photo on the big orange couch. So, if you're as excited as I am for some serious Friends nostalgia, you'll be very happy to hear that the first photos of the Primark Central Perk Café are here, and they're as beautiful as you'd imagine.

As Bustle has previously reported, last month, Primark teased that they would be opening a Central Perk Café in Manchester to celebrate the 25th anniversary of Friends (25 years already, blimey). The café is the result of a partnership between Warner Brothers and Primark and was opened to the public on June 12.

Since Friends ended in 2004, we have all often wondered about the six New Yorkers. Like, has Joey made it as a leading man? Did Phoebe and Mike end up having kids? Did Ross and Rachel get married (again)? While it's highly unlikely that any of the stars will make an appearance there, this café is going to be the easiest way to reminisce and immerse ourselves in Friends culture once again. So, after picking up your biodegradable glitter and Love Island slogan tee in Primark, you will be able to relax and hang out in the Central Perk Café.

The Independent reports that the café will come complete with jumbo coffee mugs and the classic sofa, so you'll really feel like you're one of the gang.

The first photos of the café look pretty amazing. Decorated in classic NYC autumnal hues of oranges and browns with a neon sign spelling "Latte" adorned on the wall. Of course, this Central Perk Café in Primark is also a fully functioning coffee shop with a New York inspired menu, stocking a range of coffees, teas, iced drinks, pancakes and waffles to sample.

But oh, that's not all the treats the Central Perk Café has to offer. You'll be able to carry your coffee in a cup with the Central Perk logo on it and the word "Manchester" in the Friends typology. Primark have said "it will also use compostable cups and ethically sourced coffee beans, as part of its Primark Cares initiative." Eco-friendly and Friends themed? If that doesn't make you want go I don't know what will. This café is the perfect opportunity to get a few snaps on the iconic sofa, while talking about all things Friends.

The exterior shots of Central Perk that we see in the show are actually located on Bedford Street in New York's West Village, as the Telegraph reports. The little red corner restaurant at the bottom of the apartment block is a place called The Little Owl, which serves mediterranean cuisine, not coffee. The inside was a TV set, which fans are able to visit on the Warner Brother's studio tour in LA. There is also Friendsfest in the UK, which takes place in London 20-29 September, 2019.