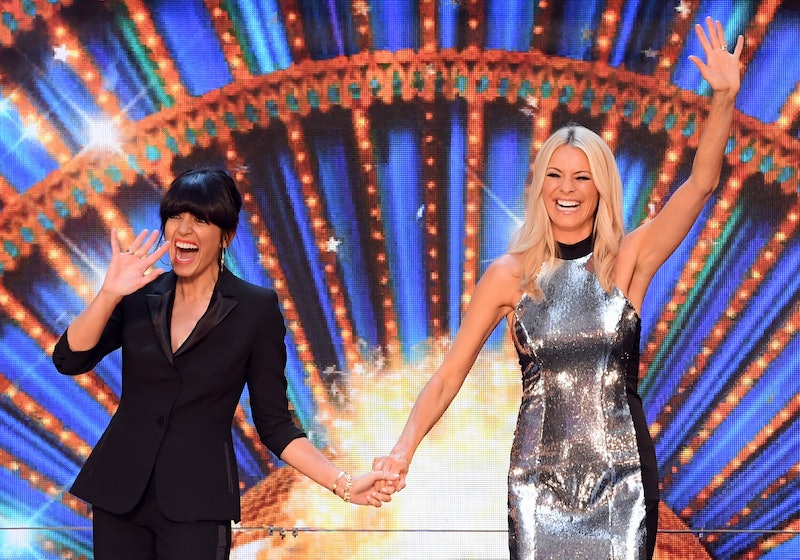 As Strictly Come Dancing 2019 draws ever closer, details of the upcoming series have slowly but surely begun to emerge. Earlier in the year, it was revealed that long-time judge Darcey Bussell would not be back for the BBC show's 17th series, and dancing champ Motsi Mabuse was announced as her permanent replacement. As usual, news surrounding this year's celebrity contestants has so far been kept tightly under-wraps, however, Strictly Come Dancing's first contestants have been confirmed, and I'm already seriously excited about the 2019 series.

According to the Metro, the first Strictly 2019 contestants were announced by reigning champ Stacey Dooley and TV host Matt Baker during a special edition of The One Show. During the live broadcast, it was revealed that the former-England footballer David James, Eastenders actor Emma Barton, and comedian Chris Ramsey will all be taking part in the BBC competition series. It was then announced on Thursday morning during Heart FM's Breakfast Show that YouTuber Saffron Barker would also be joining the line-up.

Speaking to Dooley and Baker about his upcoming TV gig, footballer James revealed, "I have had to keep it a secret for so long. I told my mum, and she forgot." The former Manchester City goalkeeper went on to say that he had been asked to take part in the BBC series before, and this was the year he finally caved. Speaking on The One Show, James said, "I have been asked to do this a number of times and I said no. But I had a chat with Fozz (Mark Foster) and he said it’s an amazing show with amazing spirits, and so this time around I said yes. I’m looking forward to the lessons to see what happens."

As reported by the Mirror, comedian Chris Ramsey, who is best known for his TV appearances on show's such as Celebrity Juice and Live At The Apollo and 8 Out of 10 Cats, said that he is both "excited" and "terrified" to be taking part in the long-running BBC hit. Speaking on The One Show, Ramsey said, "I’m both excited and absolutely terrified to be doing the show. You will not find me on the dance floor at parties, you will find me at the buffet table. All night. At my wedding I danced with my wife; that one song took about six months practice, and I definitely stood on her feet a couple of times." Ramsey went on to say that he is "looking forward" to potentially making a fool of himself in front of millions of viewers, and requested that there should be a buffet after the live shows — although that's probably some wishful thinking on his part.

According to the Express, actor Emma Barton was also confirmed as the third contestant to join the 2019 series. Barton is best known for starring in the long-running BBC soap Eastenders, and when speaking about her upcoming Strictly Come Dancing journey, Barton said, "as possibly one of the biggest Strictly fans on the planet, I still can’t believe this is happening. I’m very much a dance around your handbag kinda girl, but now I've been given this wonderful opportunity to learn all the different styles of dancing from the very best in the business."

Meanwhile, as Digital Spy reports, Barker told Heart breakfast hosts JK and Kelly Brooke, “I am really excited to go on the Strictly journey and I am feeling very grateful for the opportunity!

“I’m looking forward to learning all of the dances, finding out who my partner is, getting to wear the costumes and to just experience this once in a lifetime opportunity,” Barker continued.

Strictly Come Dancing will arrive on BBC One later this year, and the 2019 line-up is shaping up very nicely indeed.